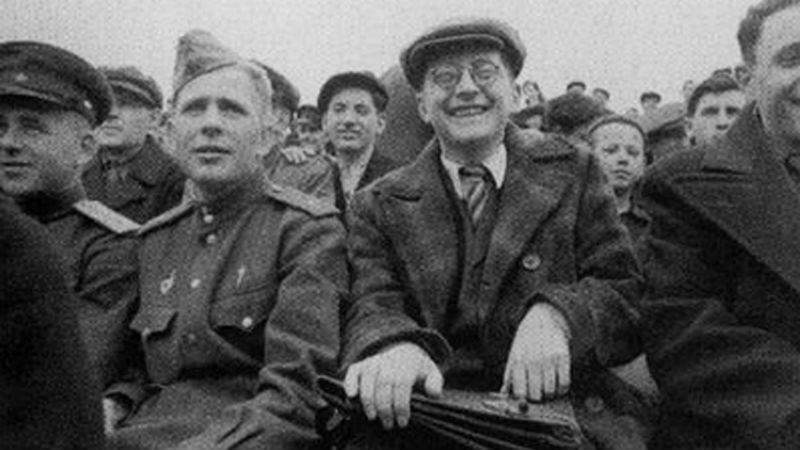 Shostakovitch at at the footy

In the late 1950’s, when I first came upon the music of Dmitri Shostakovich, he was a shadowy figure about whom very little was known – and although he had completed ten symphonies, a clutch of concertos, two operas (a third unfinished), six string quartets and other chamber pieces, and a veritable mountain of incidental and film music, few in the West had ever heard a note of his music.

The ‘story’ of this thin, serious, bespectacled, nervous, shy, chain-smoking genius was a long time emerging from the post-Stalin world he lived in for the whole of his life, but when the truth became clear, it was obvious that his frail carapace concealed the heart of a lion – a lion who, somehow, had found a way to develop his music under the yoke of a totalitarian regime that cared little for art or intellectual rigour.

Not surprisingly, most of his output reflects this unrelenting downward pressure (he missed a trip to the Gulags by a whisker) – but the larger works exhibit two strongly contrasted moods: an impish, caricatural humour, presented in march or dance rhythms that often seem to spin out of control, to the point where you imagine that the composer is on crystal meth; impossible, although he did like vodka. Almost the polar opposite of this was a more personal sentiment, inward looking and of a desperate intensity. This was the mood I came to love and cherish.

The picture of him above, supporting his favourite football team Zenit Leningrad (he was a certified referee) is atypical; most images of him show a thin-lipped seriousness as his default mode – and who would wonder why? Among his personal neuroses was a mild obsession with cleanliness, and a regular need to synchronise all the clocks in his apartment. He also sent post-cards to himself to check how well the postal service was working. Sounds quite normal to me.

This obsessiveness seeped into his music too, most obviously in the musical cryptogram DSCH that litters his mature compositions.

This ingenious musical ‘motto’ is derived from the German transliteration of the composer’s name – Dmitri SCHostakovich. In German musical notation S is E flat and H is B natural, giving the eerily unsettling four-note sequence, D-E flat – C – B, that Shostakovich-geeks know so well.

In 1960, whilst one of those geeks was discovering the wonders of Clearasil, the composer was in Dresden writing film music. It was our good fortune that he also found time (in just three amazing days) to write his String Quartet No 8 in C minor, which became his opus 110, and later, via the pen of his friend Rudolf Barshai (d. 2010), the Chamber Symphony No 1.

I was in Dresden a few years later and there was still rubble in the streets from the senseless bombing of the ‘Florence of the Elbe’ by the Allies in 1945. It is surely not too fanciful to imagine the effect that this panorama had upon the composer, a fact confirmed by the dedication he gave to it – ‘In Remembrance of the Victims of Fascism and War’. Here, the numbing intensity of the bleak first movement, beginning with the four-note motto, and developing into a hymn of sorrow.

It is oft said of Shostakovich that, like Dostoevsky before him, his profession de foi was confrontation with evil and additionally, perhaps, the defence of man. But this struggle, against the all-powerful Joseph Stalin and the system he created, was an uneven one. Branded an ‘anti-people’ musician, his work was publicly dismissed as ‘an intentionally discordant muddled flow of sound’. Only when the monster died, on March 5th, 1953, did Shostakovich feel comfortable enough to release his Symphony No 10 in E minor which, in its furious second movement is, by most commentators’ reckoning, a breathtaking sound-portrait of his tormentor. It begins fortissimo – and gets louder. There are fifty crescendos and just two diminuendos, all this in under five minutes.

The only Shostakovich work that the late Herbert von Karajan ever recorded, twice, was this symphony, and to my ears the peerless virtuosity of the Berlin Philharmonic, particularly in this short movement, pins you to the seat. In this live performance the band sound a bit more ragged, as you might expect, but the visceral excitement is undimmed. What a pity that Karajan’s interest in Shostakovich began and ended with this great work.

‘I don’t myself quite know why the quotations are there, but I could not, could not, not include them’. Here is the composer talking about his last symphony, No 15 in A major – and what a puzzle it is. Already terminally ill, and just four years away from the grave, the first movement opens like the door to a toy-shop, with two chimes on the glockenspiel, some chirpy tunes from the woodwind and, a few moments later, the Lone Ranger theme from Rossini’s William Tell overture. Is this a madhouse – or second childhood? Well, as it turns out, neither. The composer had not lost his mind and, although unusual in almost every way save the four movement format, the symphony is packed to overflowing with youthfully brilliant ideas. He goes on to quote from Wagner, with shades of Rachmaninov and, not for the first time, from his own canon. A musical marvel from a man who once said that if the Soviets cut off both his arms and his legs, would go on composing by holding a pen in his mouth.

After the composer’s near-fatal heart attack in 1966 most, if not all his music became freighted with the miasma of death. The nerve-shreddingly claustrophobic chamber Symphony No 14, for me his greatest work, is unremittingly bleak from start to finish. His last great string quartet, No 15 in E flat major consists of six movements, all slow or very slow, and my advice to anybody contemplating the investment of half an hour listening to it, is to make sure that you are in a particularly good mood on that day, as I refuse to take any responsibility for what you may do to yourself, or others, afterwards.

Then, at the very end of his life (he completed the score in hospital), the fight seemed to be over, and there was, in the Viola Sonata Opus 147, a sense of acceptance that he could embrace death without fear. Easy listening this music is not – but I’ve softened you Dabblers up over the last four years with drive-time specials; now it gets serious. And can you think of better guide into that good night than Sviatoslav Richter and Yuri Bashmet? No, nor I.

5 thoughts on “The Bleak Poetry of Dmitri Shostakovich”