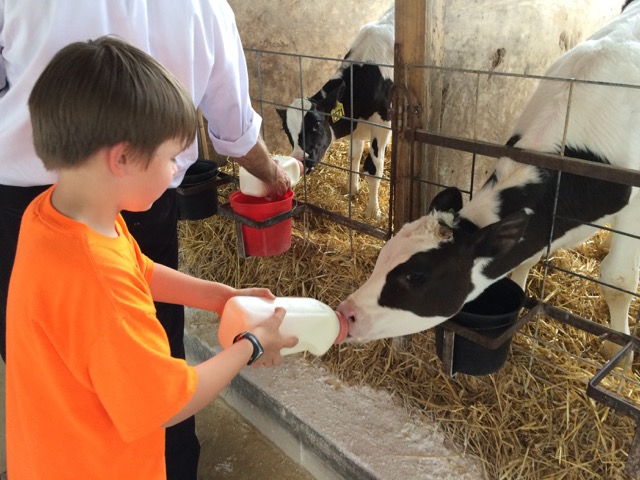 Rita goes country – and finds a haven from modern America… but not, alas, from the tax man….

It was supposed to be a simple outing to an ice cream store to treat the little boys. I never could have imagined that by late afternoon I would be bottle-feeding a baby cow, or to use the technical term, calf. But that’s the kind of thing that can happen when you escape the vortex of Washington D.C. and venture out into rural Maryland, or as some would say, the Real Maryland.

It was a lovely early spring afternoon when I met up with my daughter and her family as they returned from a hike in one of Maryland’s State Parks. On the way to meet me they had seen a sign for an ice cream store. “Just up the road,” said my daughter confidently. So I got in my car and followed them. True enough, the sign was just a short drive away. But when we took the turning there was nothing to be seen but empty green fields and a narrow country road twisting away before us to who knows where. We drove for miles with nary a sign of an ice cream store, or any other sign of life for that matter. It was one of those Maryland drives when you could imagine, just for a moment, that you were in England. I was glad to be in my own car. The little boys, eager for the promised ice cream, must be wailing a chorus of “Are we there yet?” in the van ahead of me.

Then suddenly we turned a corner and found ourselves in the middle of a farmyard. There was the sign we were looking for: South Mountain Creamery. It wasn’t just an ice cream store; it was a dairy farm. We turned into a rutted, muddy patch of dirt next to a ramshackle hut that appeared to be the store. Once out of the car the unmistakable pungent odor of farm hit with full force. It took me back to my student days when just a short hike off the University of Sussex campus could take us to a similarly stinking farmyard that we imagined was the inspiration for Cold Comfort Farm. “Pee-ew,” gasped one of the boys holding his nose in a dramatic gesture of disgust. But the promise of ice cream, now so near, triumphed over the smell. Inside the store we got down to the arduous business of selecting ice cream flavors which, for this family, involved much debate and changes of mind. A young woman behind the counter interrupted us. “If you’re here to feed the baby cows,” she said, “you’d better hurry up, it’s starting in ten minutes.” Seeing our confusion she explained. Every afternoon at four o’clock the public were invited to bottle-feed the calves in the barn across the road. It was first come first served and very popular. If you wanted to feed a calf you had to get there early and claim one ahead of the crowd. The boys, of course, could not be deflected from the ice cream. So we waited for our order and then walked across the road to the barn, ice cream cones in hand.

I had envisaged people feeding tiny newborn calves snuggled in their laps. But these were more like rambunctious teenagers ranged in separate pens down each side of the long barn. To claim a calf to feed you just stood in front of its pen and waited. The barn was crowded with families, but right by the entrance there was an unclaimed pen. My eldest grandson swiftly stepped up and then stepped back as the eager calf stuck its neck out towards the ice cream cone. On the dot of four a farm worker ran down the aisle handing out milk bottles from an enormous bucket. The calves were quite aggressive, latching on to the teats of the bottles as though they would wrench them away. We all took a turn holding the bottle except the two-year-old whose concentration on his ice cream cone was total. The feeding did not take long, the greedy calves leaving us plenty of time to explore the rest of the family-run farm. We watched the adult cows hooked up to milking machines looking bored and resigned. We saw the rows of vans that home deliver the farm’s dairy and meat products to customers throughout the Washington area. Then the boys ran over to the children’s cow-themed playground. We sat at a picnic table enjoying the fresh spring air and the view of South Mountain, the Maryland stretch of the Blue Ridge. The Appalachian Trail passes through here, and South Mountain was the site of an 1862 Civil War battle where the Confederate forces were briefly halted in their northern advance. Now it is a quiet peaceful place, a bucolic retreat a world away from the machinations of Washington D.C. But looks can be deceiving. As I was to learn in the pages of The Washington Post just a few days later, the farm was embroiled in a government investigation into money laundering.

It all started when the family decided to bank the proceeds of their Farmer’s Market sales in a separate account. They took a bank employees’ advice to keep the deposits below $10,000 or they would have to fill out a government form each time. Avoiding paperwork turned out to be costly, because structuring regular deposits just below that threshold triggered an investigation. Could they be hiding the dollar amounts because they were laundering drug money or funding terrorists? The Federal agents who showed up at the farm in February 2012 were easily convinced that this was just a family dairy farm and not some nefarious enterprise. Maybe they were softened up by being invited to feed the baby cows? Nevertheless, the farmers were on the wrong side of the law. The IRS seized the account and confiscated $29,500 in fines. The farmers appealed and are still trying to get their money back three years later.

Needless to say, a fight that pits the government against a farm of baby cows and chickens and ice cream is hardly a fair one. The South Mountain Creamery’s cause has been taken up by various libertarian and conservative organizations. But here is one case where the usual political divide doesn’t apply. When it comes to baby cows and home-delivered milk in glass bottles we’re all on the same side.