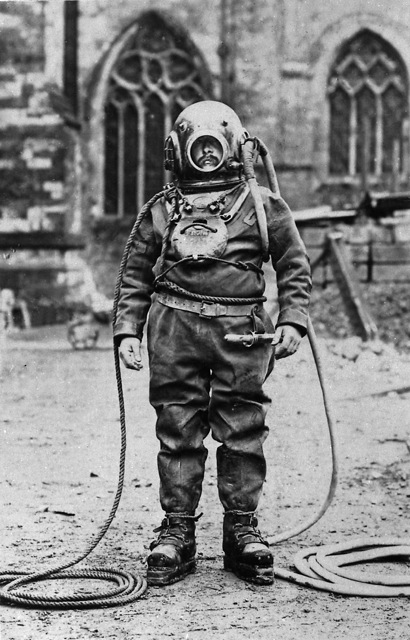 Cathedral diver? Sounds like fun, but this might have been the world’s worst job. Read on to find out more in this week’s weird Wikipedia article…

William Walker MVO (1869–1918) was an English diver famous for shoring up the southern and eastern sides of Winchester Cathedral.

He was born William Robert Bellenie, in Newington, Surrey, England, in 1869. Around 1900, he adopted the name William Bellenie-Walker, eventually dropping the Bellenie part to be known as Walker.

In 1887, he began diver training at Portsmouth Dockyard. He worked through the roles of diver’s attendant and diver’s signal man, passing his medical exam and deep-water test to qualify as a deep-water diver in 1892.

Before his work, the cathedral had been in imminent danger of collapse as it sank slowly into the ground, which consisted of peat. To enable bricklayers to build supporting walls, the groundwater level had to be lowered. Normally, the removal of the groundwater would have caused the collapse of the building. So, to give temporary support to the foundation walls, some 235 pits were dug along the southern and eastern sides of the building, each about six metres deep. Walker went down and shored up the walls by putting concrete underneath them. He worked six hours a day—in complete darkness, because the sediment suspended in the water was impenetrable to light.

After Walker finished his work, the groundwater was pumped out and the concrete he had placed bore the foundation walls. Conventional bricklayers then were able to do their work in the usual way and restore the damaged walls.

During the latter part of his time working at Winchester, Walker cycled home, 70 miles to South Norwood, at weekends returning by train on the Monday.

In response to questions about his work on Winchester, William says “It was not difficult. It was straightforward work, but had to be carefully done”.

Walker married twice. His first wife died before he began work at Winchester. He married his second wife, sister of his first, in 1907, and had several children during his years working at Winchester.

Walker died during the Spanish flu epidemic of 1918 and is buried in Beckenham Crematorium and Cemetery, London.