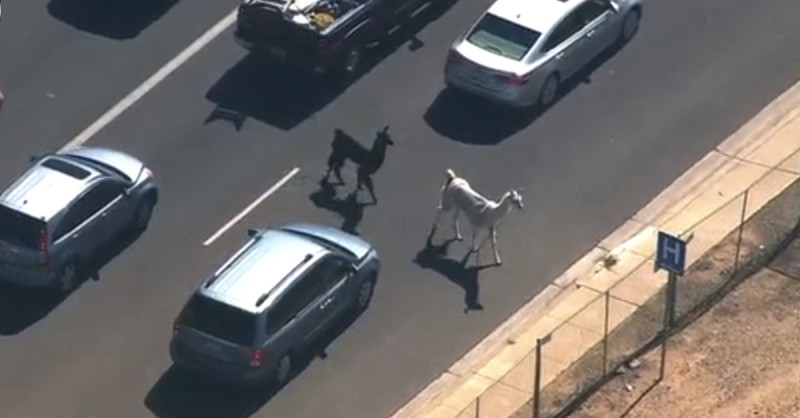 The llamas made a break for freedom. And freedom-loving Americans everywhere were captivated by the live video feed from suddenly diverted traffic helicopters. It was the most exiting chase scene since OJ and the White Bronco. This happened in Sun City, Arizona on February 26th of this year. Cable news anchors happily broke away from reporting on various depressing world crises and treated viewers to hours of “breaking news” coverage of the futile attempts to catch the fleeing llamas. And who can blame them? Who wouldn’t rather watch escaping llamas than the latest atrocity video from ISIS or the latest misbehavior of Putin or Bibi? The llamas made good use of their sudden fame, giving us the thrill of the chase as well as some slapstick comedy, making their ineffectual human pursuers look rather silly. It didn’t matter that the situation the llamas were running from was not exactly hard labor or cruelty. They were en route to cheer up the old folks incarcerated in a nursing home. Probably some of them would have liked to join the llamas in their dash for freedom.

The escaping llama drama reminded me of a memorable family outing years ago when my children were young teenagers. The curious feature of my own llama drama is that it didn’t actually involve any llamas. Let me explain.

We were visiting my sister who lives in the charming little town of Anacortes on Puget Sound in Washington State. We’d been on several hikes, but there really wasn’t much else to do in Anacortes to keep teenagers occupied. So on a Saturday morning my sister perused a list of local events in the newspaper and suggested we go to the Llama Festival in the neighboring town of Sedro-Woolley. There were a few raised eyebrows and chuckles that this was the most exiting thing the area had to offer. But my daughter was enthusiastic. She was involved in raising goats for a project at her Middle School (how can you be angry at a girl whose excuse for being late home from school is that she was feeding baby goats?) She actually found the idea of seeing llamas genuinely exciting. So off we went. 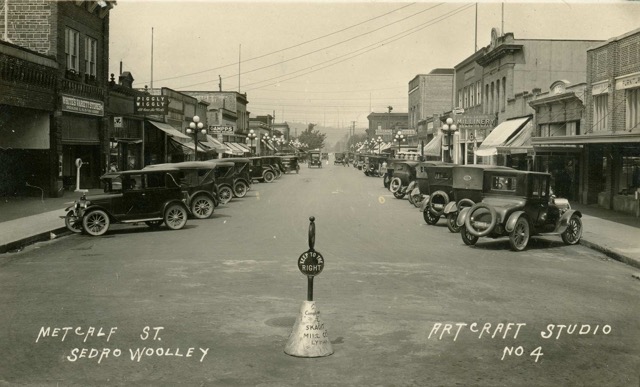 I thought the oddly named Sedro-Woolley must have got part of its name from llama wool, imagining it to be a historic center of llama raising, hence the festival. But the town actually got its name from the merging of two separate towns in the late nineteenth century. Woolley was named in the ordinary way after its founder, and Sedro’s name came about when the founder’s choice of “Bug” in honor of the area’s mosquito population was vetoed by his wife. The second choice name Sedro is a corruption of the Spanish word for cedar. The rival towns were a railway hub and a center of the logging industry along the Skagit River. When they decided to merge in 1898 their rivalry morphed into a fight over a new name and so Sedro-Woolley was born. Today, its industrial heyday far behind it, the town is known as The Gateway to the North Cascade Mountains. Its history reveals no connection whatsoever to llamas.

The town we drove into on that long-ago Saturday morning seemed a sleepy place that, except for a couple of traffic lights on Main Street, could have been stuck in the nineteenth century. The only sign of possible festivity was a banner announcing the
Llama Festival that flapped dispiritedly in the breeze. The sky was grey and overcast adding to the general air of gloom that hung over the town. The parking lot was almost empty. Just a few glum-looking people wandered aimlessly around what passed for a town center. We couldn’t see any llamas, but there was a woman sitting at a small folding table with a sign that promised Information. She looked flustered and apologetic for her very existence, reminding me of Barbara Pym’s characters. “Where are the llamas?” asked my daughter. “Oh I’m sorry, the llamas were unable to attend,” replied the woman. No further explanation was forthcoming. As we drifted away spits of rain began to fall. No llamas and no festivity. There was obviously no reason to tarry any longer in Sedro-Woolley, home of the llama-less Llama Festival.

This tale has gone down in family lore as a quintessentially English experience mistakenly transposed to America. What could be more English than this eccentric, misbegotten failure of a festival, complete with English weather? It could have happened in the pages of P.G. Wodehouse or any number of village life satires. There is no trace of the hallmark American qualities of efficiency, hucksterism, or showmanship in the story. It was people of English stock who settled the Skagit Valley, so perhaps Sedro-Woolley had managed to stay out of the American mainstream and preserve the eccentric ways of the Old Country.

Sedro-Woolley may have no llamas, but it does have its own dramatic story of animal escape. On May 15th 1922 an elephant named Tusko escaped from a traveling circus and rampaged through the town for an entire night, leaving a trail of destruction. Tusko, known as The Mighty Monarch of the Jungle, was reputed to be the largest elephant ever in captivity, boasting nine-foot tusks. He crushed a chicken coop with one enormous foot leaving just sticks and feathers behind. He uprooted trees, knocked down telephone poles, demolished fences, and reputedly ran down Main Street carrying a Model-T in his trunk. But Tusko’s taste of freedom was short-lived. Like the llamas of Sun City, although he led his handlers on a wild chase he was eventually recaptured. It was the most exciting day in Sedro-Woolley’s history. 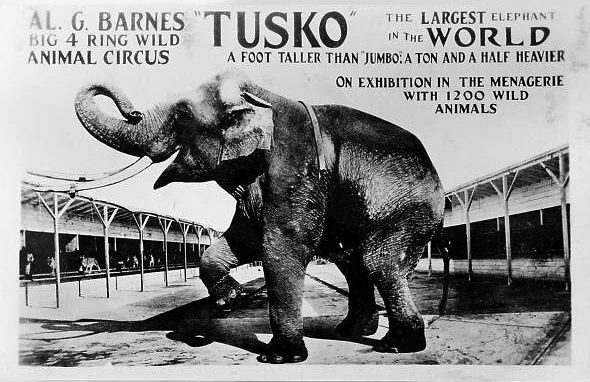