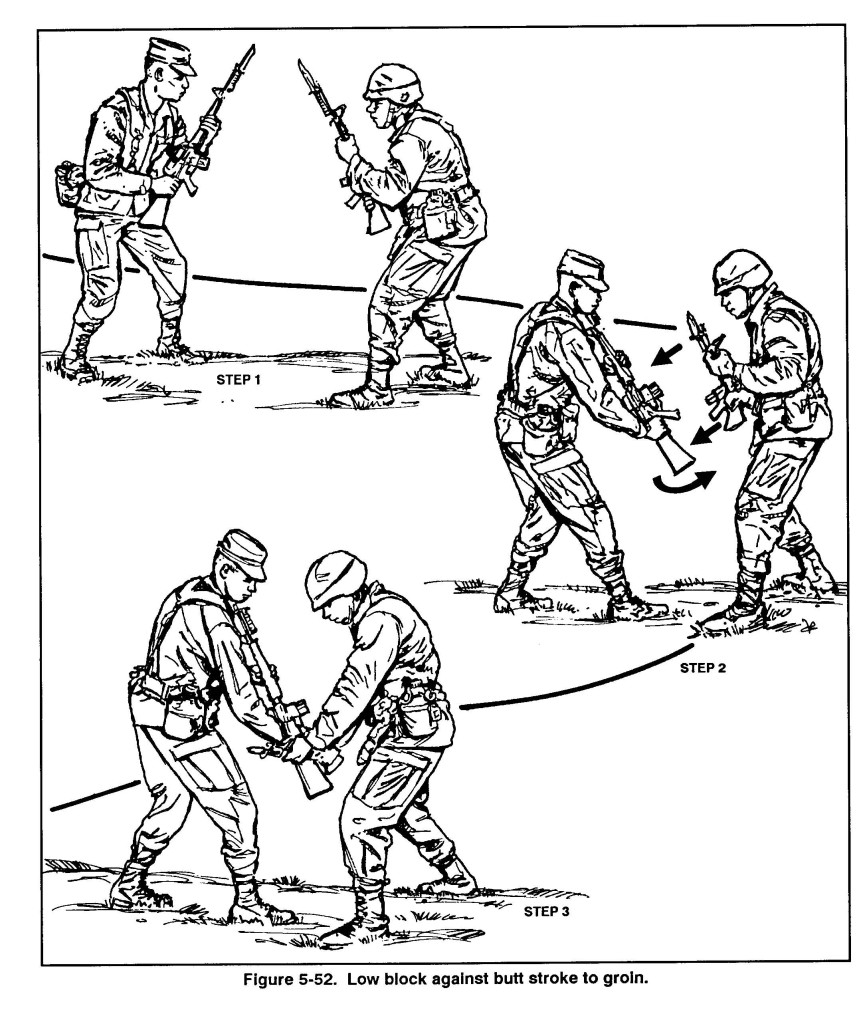 Butt-stroking is an offensive technique. Today the Wikiworm consults Wikipedia to find out the best techniques to use whilst butt-stroking.

The buttstroke or butt-stroking, i.e., striking someone with the buttstock of a rifle, is a common case of the use of a firearm as a blunt weapon. Buttstroke is among the major offensive techniques with the rifle and bayonet.

Buttstroke I – Upward swing: Swing the butt up at the opponent’s crotch, ribs, forearm, etc.,-using a half-arm blow or advancing the rear foot. Buttstroke I is essentially a half-arm blow from the shoulder, keeping the elbow rigid, and it can therefore be successfully employed only when the right hand is grasping the rifle at the small of the stock.
Buttstroke II – Forward strike: If the opponent jumps back so that the first butt stroke misses, the rifle will come into a horizontal position over the left shoulder, butt leading; the attacker will then step in with the rear foot and dash the butt into his opponent’s face.
Buttstroke III – Downward cut: If the opponent retires still farther out of distance, the attacker again closes up and slashes his bayonet down on his opponent’s head or neck.
Buttstroke IV – Side blow: If a thrust has been made at an opponent and parried, the butt can be effectively used by stepping in with the rear foot swinging the rifle to the left and rear, so that the butt leads and is in front of the right forearm. Then dash the butt into the opponent’s face, or against the side of his head or jaw. When the opponent is out of distance, butt stroke III can again be used. In individual fighting, the butt can also be used horizontally against the opponent’s ribs, forearm, etc. This method is impossible in trench fighting or in an attack, owing to the horizontal sweep of the bayonet to the attacker’s left.