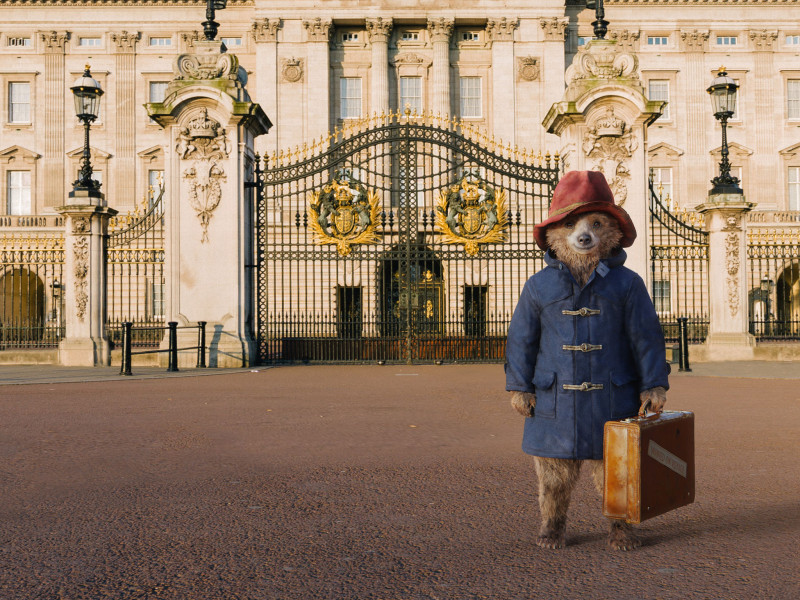 Misti Traya, American expat living in London, falls in love with Paddington and decides to have a go at making marmalade…

Just before Christmas, I took my three year-old to the cinema for the first time.  We saw Paddington and were equally charmed.  It was funny and darling and the calypso band that played throughout was fantastic.  Helena clutched her stuffed bear, chomped on popcorn, danced in her seat and shrieked with delight through most of it.  I, on the other hand, cried through at least 20% of it.  I am not sure if it’s because I was still waiting to hear about my Indefinite Leave to Remain status or what, but the telling of this tale about a little Peruano immigrant bear really tugged at my heart strings.  I love Paddington.  I am Paddington.  Yo soy Paddington.

Though the UK Border Agency had until March to process my visa application, I received it the first week of the new year.  I have no idea why it’s called indefinite leave to remain when ILR status allows one to remain in the UK for ten years.  Ten years is very definite, no?  Anyway, I was thrilled.  I studied for my Life in the UK exam like my college degree (or my residency) depended on it.  Go ahead.  Ask me anything about the Divine Right of Kings, The Pale, The Hundred Years War, 1066, Robbie Burns, or sticky wickets.  I know it all.  Or I did last August when I took the test.

While my heart’s all American, something in me changed when I received my residence permit.  And it’s not that I felt British.  Anyone who reads Chagrinnamon Toast knows that I ache for home and wish I could see my family more than I do.  That said, I am so grateful for all that England has offered me.  What’s changed is that for the first time, I don’t just feel like an American.  I feel like an immigrant.  Still so full of love for my homeland yet equally full of thanks for my adopted country.  Like I said, I am Paddington.

Which is why I felt it my duty to learn to make marmalade, not that I even like the stuff.  I just thought it should be in my repertoire especially as Helena and Henry love it.  The recipe I used was from The Breakfast Bible by Seb Emina & Malcolm Eggs.  I cannot lie.  My first attempt was a failure.  It smelled nice, tasted nice, but had the consistency of epoxy.  Apparently, when boiling marmalade, one cannot turn one’s back even for a minute.  Otherwise the temperature can quickly climb too high and leave you with mucilage instead of marmalade.

My second attempt was with the same recipe.  This was much better.  I gave some to Blake Pudding, one of the contributing writers of The Breakfast Bible, who said my marmalade “tasted like it was made by someone who didn’t have the weight of the empire sitting on her shoulders and who didn’t know the disappointments of being British.” He went on to describe it as “Fresh and juicy.  In a word, Californian.”  Keeping California in mind, I began experimenting with my own recipe. 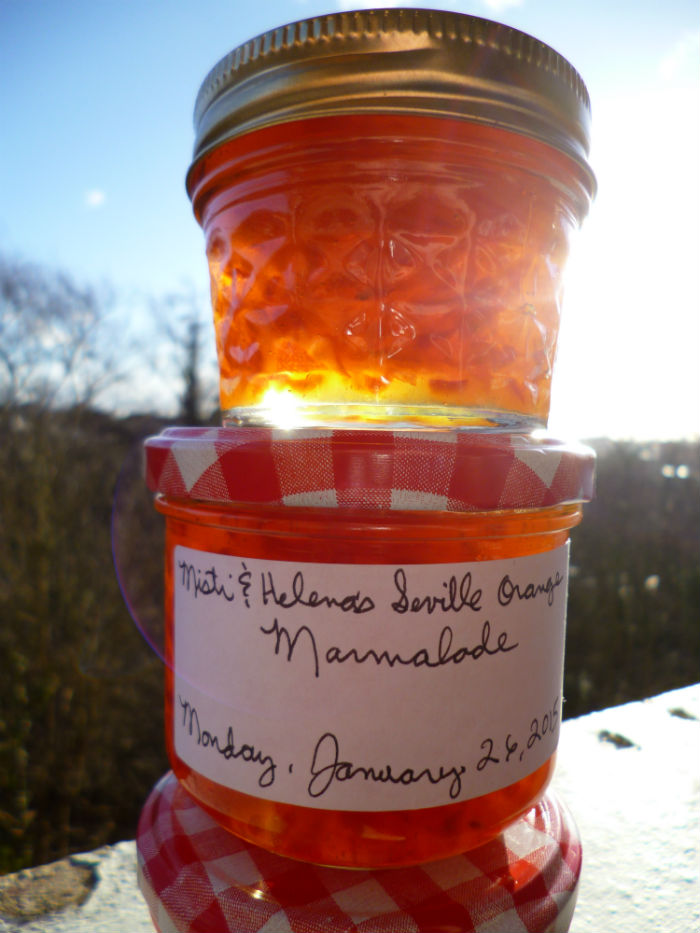 What is it I really want in cold dreary January?  To bask in the sunshine.  Sadly as that’s not an option here in London, I’ve tried to capture the warmth of the West Coast in a jar instead.  Below is my recipe.  I call it Winter Gold as it consists of Seville oranges, lemons, and ginger which look like flecks of gold when set in jars.  While it’s not sunny Malibu, it is warming and coming from someone who doesn’t like marmalade, it’s delicious.  All the glow of an orange, but with very little bitterness.

First, place a small plate in your refrigerator.  You will use this plate to later test for a set.

Next, remove the stems from your Seville oranges and give them a  good scrub.  It’s really important they be nice and clean.

Quarter each orange and put it in a large heavy bottom pan.  Add the litre of water.  Boil with a lid slightly off for an hour and a half or until the skins are tender. 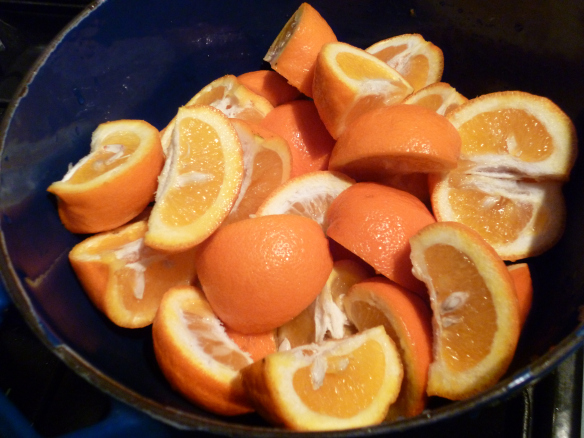 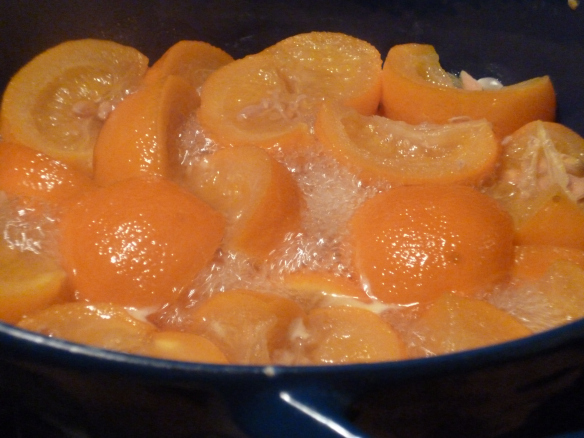 Drain the oranges but make sure to keep the water in which they were boiled.  Allow the oranges to cool.

Use a teaspoon to scoop the insides of each orange quarter.  Put the seeds, pulp, and pith into a large pan.  Cover with the 1/2 cup of water and bring to a boil.  Stir frequently to avoid sticking and burning.  Allow this mixture to boil for about ten minutes.  The purpose of this boil is to extract pectin that will help your marmalade set.  Remove from the heat and place in a cheesecloth or fine sieve to strain.  I use a spoon to stir the mixture within the sieve.  This presses out some of the pulp which is thick and sticky.  Retain all liquid that comes through the sieve.

Rinse the orange peel and drain.  Cut into shreds.

Peel the ginger and slice thinly.  Cut each thin slice into matchsticks.  Chop the matchsticks into even smaller pieces.

Prepare your jars and lids.  Wash them with warm soapy water.  Dry completely and place on a baking tray.  Put them in the oven at about 275°F/140°C/Gas 1 for at least ten minutes.  This will sterilize them.

Place the orange shred, the ginger, the sugar, both sets of liquid, and the lemon juice into a large pan.  Stir to mix.  You want everything to incorporate.  Over a medium flame, heat the mixture.  Do not allow the sugar to burn.  When the sugar has melted (you’ll be able to tell because the mixture will no longer feel gritty), bring everything to a boil.  Bring out your candy thermometer and watch it like a hawk.  Do not allow your mixture to go above 220°F this is roughly 100°C.   I take mine off at about 219°F.  Test for a set using the plate in the fridge.  Do this by spooning a little of the marmalade onto the cold plate and putting it back in the fridge for a few minutes.  If it wrinkles when you push it with your finger, it’s set.  Whatever you do, do not repeat my school girl error and allow it to surpass 220°F.  If you do this, you might as well keep boiling it even hotter and just make candy.

When you have achieved your desired set, take the marmalade off the flame and allow it to sit for a few minutes.  Stir in the butter.  This will keep your marmalade from going scummy.  Spoon/funnel the mixture into warm jars leaving enough head room.  Tightly screw on the lids and allow to cool completely.  For me, this made three and a half 280 ml jars.  Enjoy on toast, cakes, cookies, or tarts.  Even use it as a glaze for roasting ham.  Most importantly, bask in its gingery glow.

3 thoughts on “Yo Soy Paddington – A Warming Marmalade Recipe”