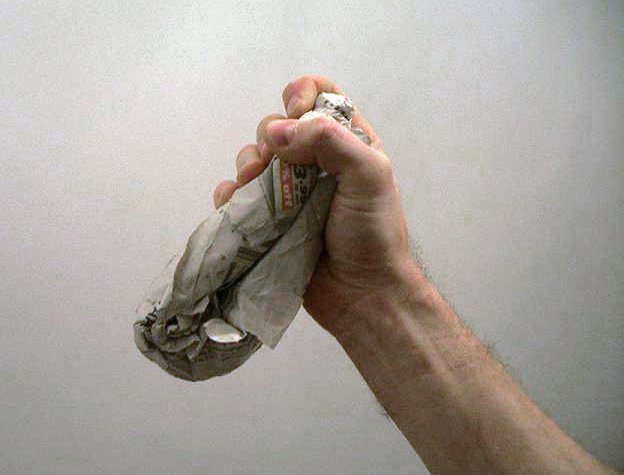 D’ya want some? Do ya? Learn how to batter assailants with your broadsheet newspaper in today’s Wikipedia article, unearthed by the Wikiworm…

A Millwall brick is an improvised weapon made with a rolled-up newspaper. It was named after supporters of Millwall F.C., who have a reputation for football hooliganism. The Millwall brick was allegedly used as a stealth weapon at football matches in England during the 1960s and 1970s. The weapon’s popularity appears to have been due to the wide availability of newspapers, the difficulty in restricting newspapers being brought into football grounds, and the ease of its construction.

In response to football hooliganism at matches in England in the late ’60’s, police began confiscating any objects that could be used as weapons. These items included steel combs, pens, beermats, horse brasses, Polo mints, shoelaces and boots. However, fans were still permitted to bring in newspapers. Larger broadsheet newspapers work best for a Millwall brick, and the police looked with suspicion at working class football fans who carried such newspapers. Because of their more innocent appearance, tabloid newspapers became the newspapers of choice for Millwall bricks. The book Spirit of ’69: A Skinhead Bible describes the use of Millwall bricks by British football hooligans:

“Newspapers were rolled up tightly to form the so-called Millwall Brick and another trick was to make a knuckleduster out of pennies held in place by a wrapped around paper. You could hardly be pulled up for having a bit of loose change in your pocket and a Daily Mirror under your arm.”

The book Skinhead says, “The Millwall brick, for example, was a newspaper folded again and again and squashed together to form a cosh.”

The newspaper sheets can first be soaked with a liquid to add weight. The blunt end can be wrapped with a shoelace or leather. The ends can be taped together and a string attached to the handle, enabling the user to swing the brick. A pencil, pen, or large nail can be driven from the first interior side near the middle perpendicularly through the first end so that that head of the nail rests against the first interior side. The nail may be secured in place by bringing the ends towards and adjacent to each other, effectively forming a crude nail bat.

One thought on “Millwall Brick”