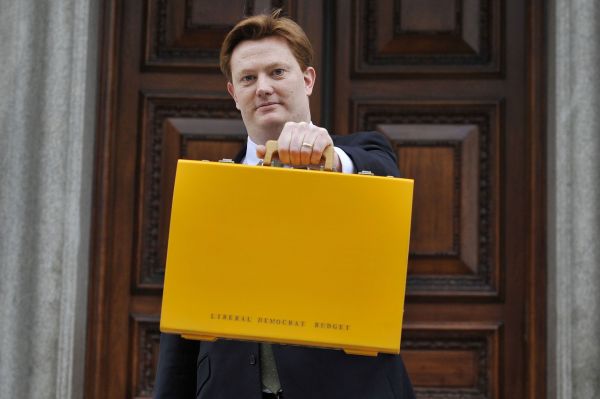 Virtually everything you will hear in the forthcoming General Election campaign from all Parties will be frothy twaddle, bearing no relation to facts and designed merely to appeal to tribal prejudices. Here are some of the most frequently-recurring pieces of tripe and the truths behind them…

1) Conservativeballs: Osborne’s ‘austerity’ has meant he’s got on top of national debt

In the Budget George Osborne claimed that he’d hit some target on national debt that nobody can remember him setting. In fact, national debt is still way above the levels planned in Alistair Darling’s March 2010 Budget, which Osborne considered so dangerously profligate that he held an ‘Emergency Budget’ a few months later to correct it. See this chart via the Spectator: 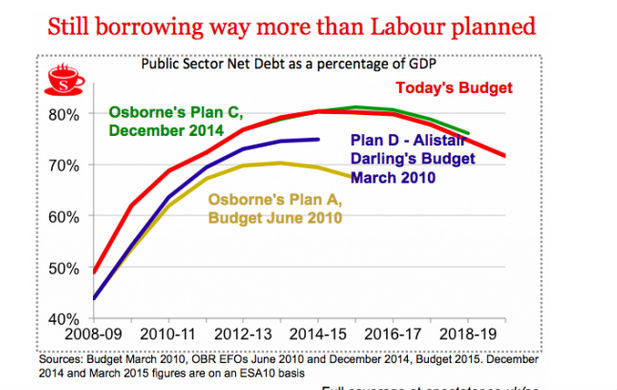 Indeed, Osborne is borrowing far more than he or Labour planned but has been saved by very low borrowing costs (a sharp fall in bond yields: a worldwide phenomenon). As a Chancellor he hasn’t been particularly austere or clever, just recently lucky.

2) Labourballs: The Tories are privatising the NHS

When you mention ‘privatisation’ people generally assume you mean selling off a state asset to the private sector, as per British Telecom or British Rail.

But when the Labour career politician on Question Time accuses the Tories of ‘privatising’ the NHS, more often than not he’s deliberately invoking that idea of selling off while actually referring to instances when the NHS has bought in services – i.e. used public money to outsource activities to independent contractors.

And the extent to which the Tories have thus ‘privatised’ the NHS? Since 2010 when the Coalition entered government the proportion of NHS services provided by independent companies has risen from 5% to a mighty….. 6%!

Freedom of economic movement is a non-negotiable principle of membership of the EU. If our economy does relatively well compared to other parts of the EU we will have high net immigration, and that’s that.

This is one of those Immovable Object-type facts so large and brutal that the two main parties have no option but to pretend it doesn’t exist. Whatever immigration controls Labour and the Tories are promising to impose must only apply to non-EU countries, like ones in Africa.

Therefore the parties with honest immigration policies that don’t discriminate in favour of countries with largely white European populations are the Lib Dems and UKIP, for opposite reasons. So if you hear a Labour  voter saying he disapproves of UKIP’s immigration policy you can ask him if it’s because he’s racist. See how that one goes down.

Monty Python’s general election was a contest between the Sensible party and the Silly party, and that dichotomisation remains useful. There are only two and a half Sensible parties (Ed Miliband is naturally Silly but the Labour party itself remains broadly Sensible.)

UKIP is still firmly in the Silly camp along with the Greens and even though (as explained above) their immigration policy is much less discriminatory than those of the Sensible parties, the UKIP membership and party itself has proportionately (not numerically) many more cranks, racists and loons than the Sensible parties, rendering them incapable of moving into Sensible territory.

5) Libdemballs – The Liberal Democrats would benefit from Proportional Representation

This is potentially wrong in two opposite ways. If you assume that the Lib Dems want to win more seats, then it’s wrong for the forthcoming Election because their national share of the vote is down at around 7%, so in a PR system they would be a similar-sized party to the Greens and half the size of UKIP. In fact, the Lib Dems will remain quite powerful in the Commons despite their low popularity because they are good at winning local, First-Past-the-Post elections.

But a more interesting way in which it’s wrong is if you assume that in the long-term PR would throw up more Coalitions in which the smaller parties would be key players.

In the last five years the Lib Dems (who contribute the half to the 2 ½ Sensible parties total) have had Sensibleness thrust upon them but yearn to return to Silliness, as evidenced by the picture (top).

Under a system of PR they would face being permanently in Coalition Government and have to become a properly Sensible party, which would lead swiftly to their disbanding.

It’s a fact so remarkable, yet somehow so inevitable, that it bears repeating whenever someone boasts about voting Green.

Brighton and Hove, the only Green-led authority in the country, is ranked 306 out of 326 councils for recycling. They recycled only 25.8% of waste in 2013/14 (the best councils managed over 65%). What could better illustrate the  gulf between sanctimoniously-expressed good intentions and the grim practical realities of trying to govern?

Some people might even think that the mere act of voting Green somehow constitutes ‘doing their bit’ for climate change. On which subject, I can’t really do better than Iain Martin’s succinct aside in this piece:

Is it happening? Don’t know, probably a bit. Is it all our fault? Doubt it. Is the world about to end? No. Will a big government response cost too much money and probably not work? Yes. Have you ever heard anyone on either side of the argument say, after a fight about climate change, that they have had their mind changed by said fight? No.

7) SNP/Plaid Cymru balls – It’s ok to vote for them even if you’re not a chippy nationalist because they’re actually just like, nice, progressive parties

No they’re not. The whole raison d’etre of the Scottish and Welsh nationalist parties is to break up the United Kingdom because they think that there are fundamental differences between the English people and themselves which are greater than the similarities. Only the tactics have changed: rather than demanding immediate independence from the outside, they aim to burrow inside and kill the body with steady injections of poison (like UKIP MEPs want to do with the EU).

There will be of course, much, much more balls uttered between now and May than is covered in my list above. Please do contribute your own examples and we’ll compile an Ultimate Campaignballs Guide for the General Reader….

3 thoughts on “Campaignballs! The Top 7 Pieces of Twaddle you’ll hear between now and the General Election”