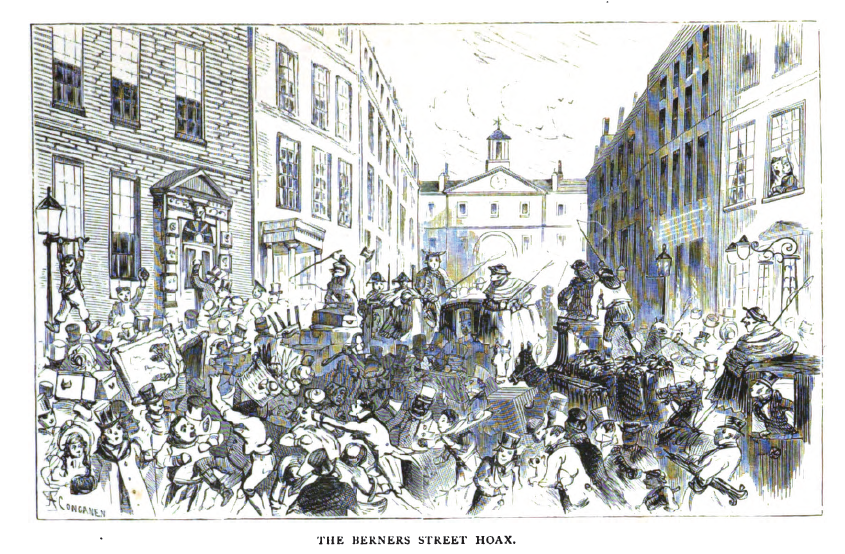 A Victorian precursor to Beadle’s About in today’s weird Wikipedia article, trawled from the interweb by the Wikiworm…

The Berners Street hoax was perpetrated by Theodore Hook in the City of Westminster,London, in 1810. Hook had made a bet with his friend, Samuel Beazley, that he could transform any house in London into the most talked-about address in a week, which he achieved by sending out thousands of letters in the name of Mrs Tottenham, who lived at 54 Berners Street, requesting deliveries, visitors, and assistance.

On 27 November, at five o’clock in the morning, a sweep arrived to sweep the chimneys of Mrs Tottenham’s house. The maid who answered the door informed him that no sweep had been requested, and that his services were not required. A few moments later another sweep presented himself, then another, and another, 12 in all. After the last of the sweeps had been sent away, a fleet of carts carrying large deliveries of coal began to arrive, followed by a series of cake makers delivering large wedding cakes, then doctors, lawyers, vicars and priests summoned to minister to someone in the house they had been told was dying. Fishmongers, shoemakers, and over a dozen pianos were among the next to appear, along with “six stout men bearing an organ”.

Dignitaries, including the Governor of the Bank of England, the Duke of York and Albany, the Archbishop of Canterbury and the Lord Mayor of the City of London also arrived. The narrow streets soon became severely congested with tradesmen and onlookers. Deliveries and visits continued until the early evening, bringing a large part of London to a standstill.

Every Officer that could be mustered was enlisted to disperse the people, and they were placed at the corners of Berners Street to prevent trades people from advancing towards the house with goods. The street was not cleared at a late hour, as servants of every denomination wanting places began to assemble at five o’clock. It turned out that letters had been written to the different trades people, which stated recommendations from persons of quality. A reward has been offered for the apprehension of the author of the criminal hoax.

Hook stationed himself in the house directly opposite 54 Berners Street, from where he and his friend spent the day watching the chaos unfold.

Despite a “fervent hue and cry” to find the perpetrator, Hook managed to evade detection, although many of those who knew him suspected him of being responsible. It was reported that he felt it prudent to be “laid up for a week or two” before embarking on a tour of the country, supposedly to convalesce.

The site at 54 Berners Street is now occupied by the Sanderson Hotel.

2 thoughts on “The Berners Street Hoax”