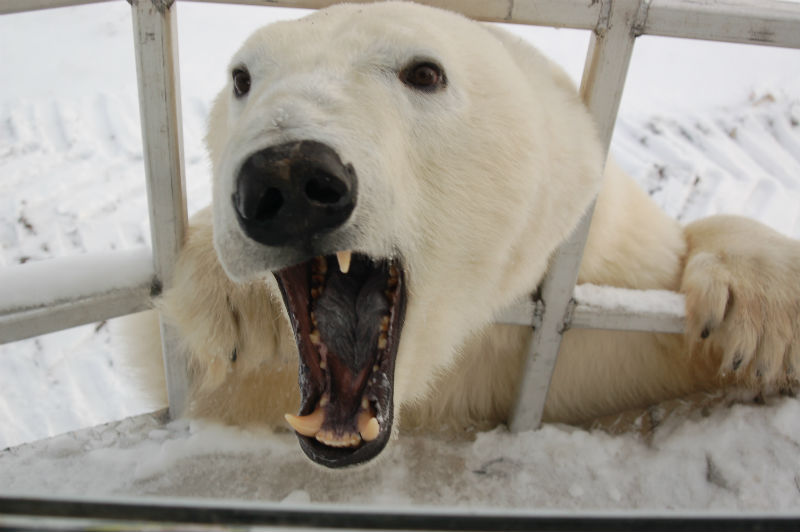 Polar bears might look cuddly but in fact they are very dangerous creatures. Here, Frank reveals a top tip for keeping safe when dealing with them…

You might, in the unimaginably harsh gale-swept subzero temperatures in the frozen hell of the polar wastes, become peckish, particularly if your picnic hamper fell down that crevasse over there.

If so, wrap up warm and plod out into the ice and snow until you see a polar bear. These are big fierce creatures, but using skill, judgement, and weaponry, you should be able to kill one.

That done, drag the slaughtered polar bear back to your nice warm hut. Using an axe, chop it to pieces, each piece being no bigger than a baby’s clenched fist. Sort the chunks out by type, i.e., fur, bone, sinew, fat, flesh, innards, what have you. Select the chunks that look toothsome, and place them in a large pot. Fill the pot with water, and bring to the boil. Place a lid on the pot and let it simmer for untold hours. Top up the water from time to time. While it is cooking, feed the unselected less toothsome chunks of polar bear, raw, to the huskies. Anything they leave can be put into a blender and liquidised. Heat this slop in a pan until it is the consistency of mayonnaise. Transfer the decisively-boiled polar bear chunks from the pot to a plate, pour over the liquid from the pan as a sauce, and tuck in.

Important note: however toothsome it appears, on no account should you eat the polar bear’s liver. It is highly toxic, containing a terrifyingly high concentration of retinol, the form of vitamin A found in members of the animal kingdom. If eaten in one meal, 30 to 90 grams of polar bear liver is enough to kill a human being, or to make even sled dogs very ill. Believe you me, you will not want to come down with a case of acute hypervitaminosis A. The symptoms include drowsiness, sluggishness, irritability, severe headache, bone pain, blurred vision, vomiting, peeling skin, flaking around the mouth, full-body skin loss, liver damage, haemorrhage, coma and death.