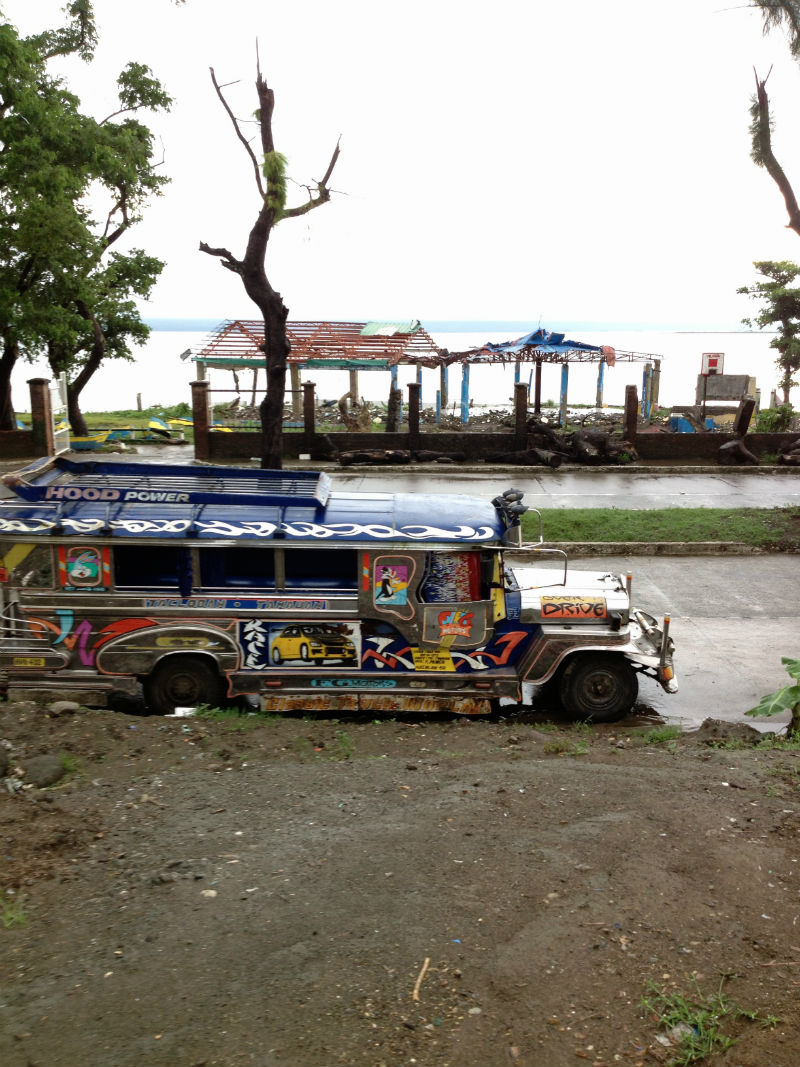 Toby Ash has spent much of the last year living in the Philippines working for an aid agency helping those affected by Super Typhoon Haiyan, which hit the country in November 2013. This is his Philippines Dabbler Diary…

I didn’t want to disturb Ricky while he was applying his make up, so I stood patiently by while he made the final flourishes with his eyebrow pen. Done, he looked up and gave me one of his winning smiles. Then it was down to business.

Ever since Typhoon Haiyan hit he had sat at his desk at the entrance to the partially wrecked sports hall which had acted as the main warehouse for the international aid that poured into this part of the Philippines. He worked seven days a week keeping a close eye on what came in and what went out with his trusty young assistant Kaiser at his side. Kaiser had an extraordinary talent for decorative signage. Never had ‘Toilets’, ‘Oxfam’ and ‘UNICEF’ been so beautifully scribed, all intricate twists and curls, giving a little bit of visual flare to the drab piles of rat shit-covered tents and sacks of rice.

A colleague and I were there last year to close down our section of the warehouse. The emergency phase was over and our remaining stock was to be trucked to our warehouse in the country’s second city, to be used when the next natural calamity hit the country. If the past is any guide, it won’t be there for long.

As we waited for the truck to be loaded, I could sense Ricky’s trepidation. As with the thousands of others affected by the typhoon, he was coming to terms with the ‘new normal’. The typhoon took the lives of family and neighbours, and left communities shattered. But in the months that followed, he and many others had been swept up in the adrenalin of the aid effort that came in its wake. Now it was tailing off, the true impact of what happened was beginning to sink in. Life would never be the same again.

The sports hall was raised above street level. From the entrance at the top of the steps, you could see directly into the first floor windows of the building opposite which was one of the few structures of any age in the town – wooden tongue and groove construction, old shutters and a terracotta coloured tin roof. From the steps we could see musical instruments on the walls and young people sitting at the open windows strumming guitars.

We decided to venture up. In a space between two of the tiny shops that lined the street, we spotted an iron gate. We went through and climbed two flights of stairs. The first took us to an outside landing, with a painted Madonna set in a rock in one corner and a pile of shoes and flip flops in another. We then climbed the second which took us into a large, airy room with old wide floorboards the colour of molasses, peeling off-white paint on the wood panelled walls and two ancient ceiling fans swirling overhead.

Our initial thought was that it was a music school. I think it was of sorts, but it certainly also doubled as a family’s front room. However, everyone seemed happy enough that these two complete strangers had come in uninvited and had started nosing about. The old boy proudly showed us the many photographs of his ancestors adorning the walls, some dating back to the nineteenth century. His was descended from Spanish settlers and I noticed how progressively less European his family looked with the passing of generations. He explained that the family was the oldest in the town and had built the church sitting in the square, which is one of the finest and most significant buildings on the island. But the family’s glory days seem to be waning. As he played French and Spanish tunes on his accordion, I looked at the musical instruments on the walls. Most had lost their strings and were no longer of any use; relics from a different world, long forgotten. 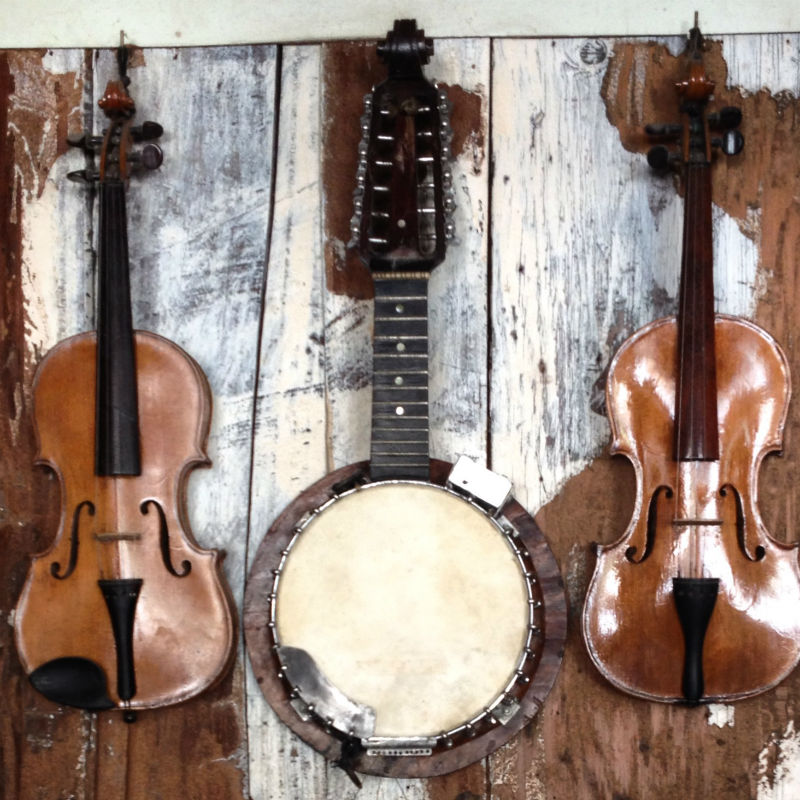 What is the world coming to when an Englishman is unable to try out his new swimming goggles without being accosted by frisky semi-naked nymphets?

To be honest, I should have been prepared. I’m good at pre-emption here, and have an array of contingency plans to deal with all manner of eventualities. But I was obviously blinded by the joy of having finally found a decent pair of swimming goggles that would allow me to enjoy some serious swimming next time I was by the sea.

So off I trotted to the hotel’s small pool, eager to try out my new purchase before it closed for the night. In the twilight I saw it was quite crowded, but as I changed into my swimming shorts under a towel, discreetly behind a potted palm tree, I spotted a decent gap for me to swim a length or two. So in I gently slipped and after carefully adjusting the goggle straps to achieve a perfect fit, pushed off for a length of breast stroke. Halfway and I am being repeatedly bumped into underwater by one and then another young lady who seemed to almost be deliberately trying to impede my progress. I swam on, determined to assert my lane rights in the face of their selfish frivolity, much as I do in my swimming baths at home when obliged to swim lengths during a general swim session.

My second length and the peso eventually dropped. They were deliberately trying to impede my progress and had now removed their tops for added effect. Flustered and shocked by this unexpected turn of events, I hastily made for the side and pulled myself out. Without a backward glance, I retrieved my towel, clothes and newspaper and headed for the exit. On the way back to my room, my swimming shorts dripped leaving a puddle of water in the middle of the lift floor. I was so cross, I didn’t even apologise.

I’m considering devoting an entire post to the extraordinariness of Filipino cuisine. To whet your appetite, here are a couple of appetisers. Firstly, Balut – an almost fully developed duck embryo that is boiled in its shell. Carefully remove the shell from the top of the egg, and luxuriate in the colonic aroma that envelops you. Then sprinkle on some salt and maybe a little chilli, and eat in two mouthfuls making sure the beak doesn’t get caught in your teeth. And what better to follow than a giant bowl of Halo Halo. This national favourite comprises a pile of ice shavings with condensed milk poured on top, a couple of scoops of fluorescent ice cream, and a generous sprinkling of the kind of stuff you find when you scoop out of your blocked kitchen sink plug hole at home. Mabuting Gani (bon appetit)!

According to the sole wholesaler of beer on the island I’m currently on, sales increased four-fold when a major international charity started a ‘cash for work’ scheme to help people who lost their livelihood in the typhoon. One could get all prissy about this, but I’m not sure it particularly bothers me. Sure if a storm swept away my house I would want to rebuild it, but I could probably do with a few drinks before I got started, even more so if someone else is paying me more than I have ever earned in my life. Perhaps there should be a charity devoted to sending survivors of natural disasters crates of beer. How about Beer Without Borders? Now that’s got a ring to it.

Toby has taken a whole series of stunning photos from his travels, which you can see on his Instagram account: @toby_ash.