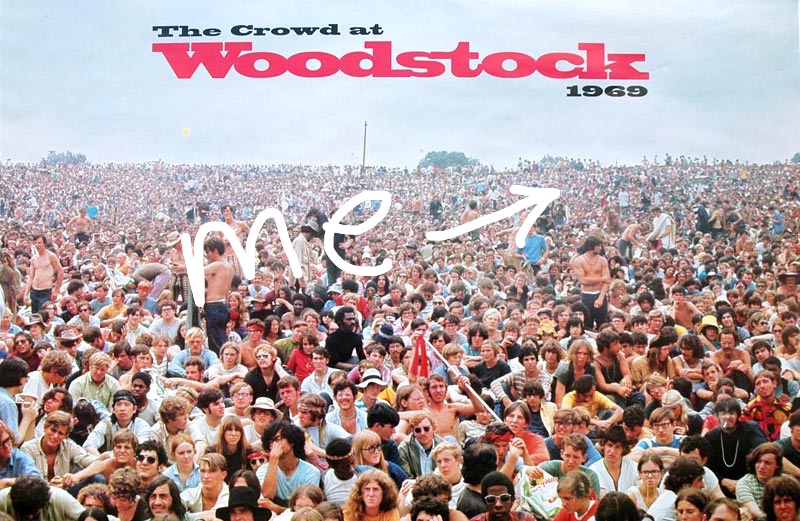 Rita decides to take a leaf out of the book of NBC’s Brian Williams and jazz up her anecdotes a bit. So here’s the story of Rita’s Life in America: the Dramatic Version (with fact checking supplied by a scrupulous research librarian)…

On my first flight out of New York the plane made a crash landing in the Atlantic Ocean after a door was left hanging open on takeoff.

Fact check: Because an emergency door was improperly secured my plane had to return to the airport shortly after takeoff. In order to be light enough to land the plane circled low over the ocean to dump fuel before making a safe landing. It was scary.

I was at Woodstock! There was so much marijuana smoke wafting through the air that I can’t give you any specific memories, but it was really cool, man.

Fact check: I was not at Woodstock. I’ve seen film of it so many times it just feels as if I was there. (It’s a fact that far more people claim to have been at Woodstock than would fit into the fields where it took place).

I hitchhiked across the country and got a ride with Ken Kesey and the Merry Pranksters in their psychedelic painted bus.

Fact check: I traveled across the country by Greyhound bus and I once saw a psychedelic painted bus parked on the street in San Francisco.

I was hit with tear gas in People’s Park in Berkeley. I can’t really describe any details of what happened because I was blinded.

Fact check: I saw tear gas clouds in the distance from the safe vantage point of a street in the Berkeley hills.

I was a neighbor of Patti Hearst and I heard suspicious noises from her apartment the night she was kidnapped.

Fact check: I lived blocks away from Patti Hearst and I learned of the kidnapping like everyone else, on the radio news.

The day Reagan was shot I met a friend for lunch at the Hilton in downtown Washington. As we left the hotel I heard shots and saw Secret Service agents shove the President into his car and speed away.

Fact check: I was the mother of two small children at the time and never went out to lunch. I saw the event replayed over and over in a constant loop on television. Almost like being there!

I had a blue dress just like Monica Lewinsky’s. It was a favorite of mine but I could never wear it again.

Fact check: The only blue dress I ever owned was the mini-dress I crocheted for myself in the 60’s.

I think my vote could have made the difference in the Bush v. Gore recount drama if only it had been counted.

Fact check: I never voted, or even lived, in Florida.

One of my best friends died in the North Tower on 9/11.

Fact check: One of my work colleagues’ best friends died in the North Tower on 9/11.

When I traveled to Florida shortly after Hurricane Katrina everyone kept blaming me for the hurricane.

Fact check: Well this one is almost true, but they were blaming me for Rita, a category 5 hurricane that made landfall a month after Katrina.

I was lucky enough to get my dream job as a librarian. I was trained in the importance of giving accurate information and always citing your sources, professional ethics very similar to journalistic ethics.

Fact check: This one is completely true.

I was on the grassy knoll…