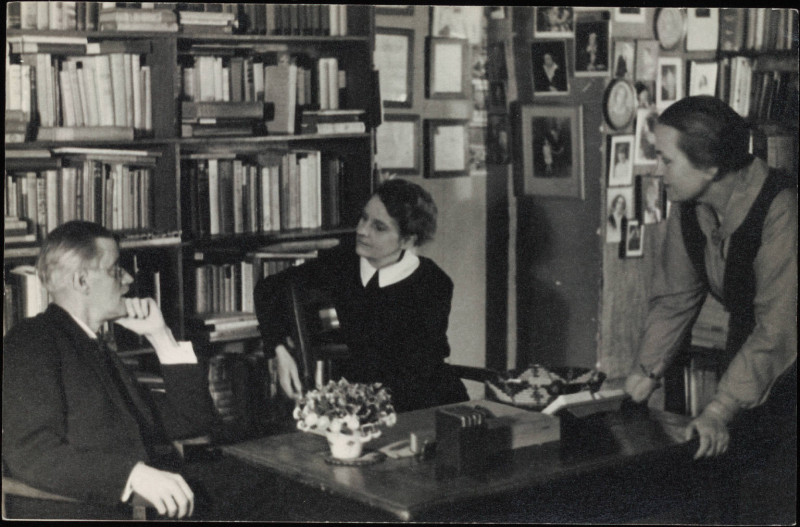 In a piece of original semi-fiction, Frank Key reveals what happened when prolific pamphleteer Dobson took it upon himself to try his luck with a commercial publishing house…

The vast majority of Dobson’s pamphlets were self-published, printed on a Gestetner machine in the garden shed by Marigold Chew, the bindings stitched by hand. On one occasion, however, the pamphleteer felt impelled to seek commercial publication.

“I feel impelled,” he announced to Marigold Chew over a breakfast of kippered sprats and marzipan brulé one desolate winter’s morning, “To seek commercial publication for one of my pamphlets.”

“I shall be most distraught, or is the word distrait?,” she replied, “To leave the Gestetner idle while you go swanning off to large important buildings. But I nevertheless think it a good idea, albeit foolish, and I wish you well.”

Twenty minutes later Dobson went crashing out of the door into the winter horrors, vowing not to return until he had persuaded a publishing concern based in a large important building to issue one of his pamphlets in an edition of millions.

His first port of call was Semi-Collapsed House, a large important and semi-collapsed edifice on Slobber Lane, just along from the railway sidings and the hamster pound. Its lower floors housed the offices of Sirinuntananon & Bewg, an ancient and distinguished publishing company. Best not to dwell on the doings on the building’s upper floors, which had been rented out, for many years, to Babinsky, the lumbering walrus-moustached serial killer.

Icicles dangling from the brim of his Homburg, Dobson crashed into the reception area. It was deserted, save for a stray cobweb and a scurrying beetle. Dobson stamped on the beetle, and the thud of his Cambodian Actuary’s boot upon the linoleum (and the beetle) brought a hobbledehoy skittering into the room from a dark interior somewhere-or-other. The hobbledehoy tugged his forelock, which was greasy, greasy and vile, greasy and vile and repellent.

“How may I be of assistance, good sir?” he whimpered.

“I am Dobson!”, shouted Dobson, as if that were all the world need know.

Several hours later, having managed to persuade the hobbledehoy to allow him beyond the reception area, the pamphleteer was ushered into the office of Mr Sirinuntananon, or possibly Mr Bewg.

“I understand,” said the publisher, “That you have been impelled to seek commercial publication for one of your pamphlets.”

“To whom am I shouting?” shouted Dobson.

The hobbledehoy loomed behind him and spoke barely audible words into his ear.

“That is Mr Bewg, sir. He is boisterous and brilliant and barbaric. You can tell them apart, when they both occupy the same space, because Mr Sirinuntananon is saturnine and scruffy and savage.”

No sooner had he stopped speaking than a saturnine and scruffy and savage fellow slid into view from behind an arras.

We might usefully pause here to consider a potted history of Sirinuntananon & Bewg. It is a history not only potted but illustrious, redolent with terrific books and equally terrific authors, with terrific mezzotints tinted especially for the covers of those terrific books, and with terrific hairstyles sported by those terrific authors. Unfortunately, from somewhere upstairs there comes the ungodly din of Babinsky, wreaking his usual blood-splattered chaos. It is a din which deafens as it distracts, so we shall have to postpone the potted history for a more opportune time. I have pencilled in next Tuesday lunchtime, incorrigible optimist that I am.

Instead, let us watch as winter sunlight glitters on the semi-collapsed roof of Semi-Collapsed House. Let us ponder its broken chimney-pots in which adventurous birds have built their nests in which tatterdemalion fledglings screech, their beaks opened wide awaiting mama or papa to come swooping in from foraging to drop juicy wounded worms into their gullets. Let us watch as clouds scud across the winter sun and the first flurries of snow begin to fall. And now, below, we see the pamphleteer, ejected into the street. Dobson has left the building.

“Hello Dobson,” said Marigold Chew, later, as her snow-covered inamorato came crashing through the door, “How did you get on?”

“It was like this, Marigold my poppet,” said Dobson, “I visited the offices of Sirinuntananon & Bewg the ancient and distinguished publishers where I met saturnine and scruffy and savage Nuttawood Sirinuntananon and boisterous and brilliant and barbaric B. Bewg also their hobbledehoy who acts as a kind of factotum and after some shilly-shallying into the details of which I shall not go now or evermore for it pained me exceedingly and I do not wish to relive it the hobbledehoy made a pot of tea for three and we sat in armchairs the publishers and me and Bewg began to speak but I could not hear a word he said for from above on the upper floors of the building came such a din as can only have been the sound of a psychopathic serial killer committing an enormity perhaps with an axe and when eventually it subsided after a final blood-curdling scream I asked Bewg to repeat himself but instead his colleague spoke and there was savagery in his voice as he explained that the previously independent publishing firm founded by Sirinuntananon’s grandfather and Bewg’s grandmother so long ago had now through what he called market forces whatever they might be been sold to a new owner of untold wealth and influence and this fellow generously allowed Sirinuntananon and Bewg to cling on to their positions in the offices in Semi-Collapsed House but that all decisions about what was published or not published were his the new owner’s and his alone and if I told them something about my proposed pamphlet then they would ferry he used the word ferry that to the owner and he would consider my proposal there and then for he liked to make snap decisions so I said that I had an idea for a pamphlet about a revolutionary new type of birdseed or millet but if that was not deemed commercial enough I also had up my sleeve an exciting science fiction yarn entitled Attack Of The Jellyfish Monsters From Planet Googie Withers and would they run both of those past the new owner and Bewg and Sirinuntananon looked at one another and gulped down their cups of tea in somewhat barbaric and savage fashion as if they had never drunk out of dainty china cups before and then they told me to wait and they both left the room and I sat and peered out of the window and saw that snow was falling and I fell into a daze and dreamed of dust and I woke when the door opened and it was neither Sirinuntananon nor Bewg but the hobbledehoy and he gave me a wolfish grin and took my empty teacup and smashed it against the wall like Dusty Springfield liked to do with crockery and then there was a puff of smoke and the hobbledehoy vanished in a cloud of fuming vapour as black as the blackest thing in the universe and beyond and a minute or so later he stepped out of it towards me only it was no longer him the hobbledehoy but a transfigured version with horns and a forked tail and eyes that burned and it was Beelzebub himself I swear it as sure as eggs is eggs and he roared at me that he had given due consideration to my suggestions and made a snap decision that the world was absolutely ready for a million-selling pamphlet about a revolutionary new type of birdseed or millet and he had already had his minions Sirinuntananon and Bewg draw up a contract and he brandished it at me a single sheet of paper on which the words seemed to have been scratched in gore by a wild beast and he continued to roar saying I must understand that by signing the contract in return for commercial publication of my pamphlet I would be selling him my immortal soul and did I understand him quite plainly my soul would be his for eternity and did I realise that eternity never came to an end and if I wanted to comprehend the unimaginable duration of eternity I ought to read the sermon by the priest in A Portrait Of The Artist As A Young Man by James Joyce and I said I had already read it and I understood and he said here is your chance to back out you can leave Semi-Collapsed House and forget everything that has happened here and continue with your puny and curdled life churning out unread and out of print pamphlets until you drop dead but if you sign the contract I will publish your birdseed folderol and I will have your soul and I said alright alright you don’t need to repeat yourself I get the idea and he shoved the contract into my hands and gave me a biro and said so will you sign Dobson will you sign and my heart was going like mad and yes I said yes I will Yes.”

One thought on “Dobson and the Publishers”