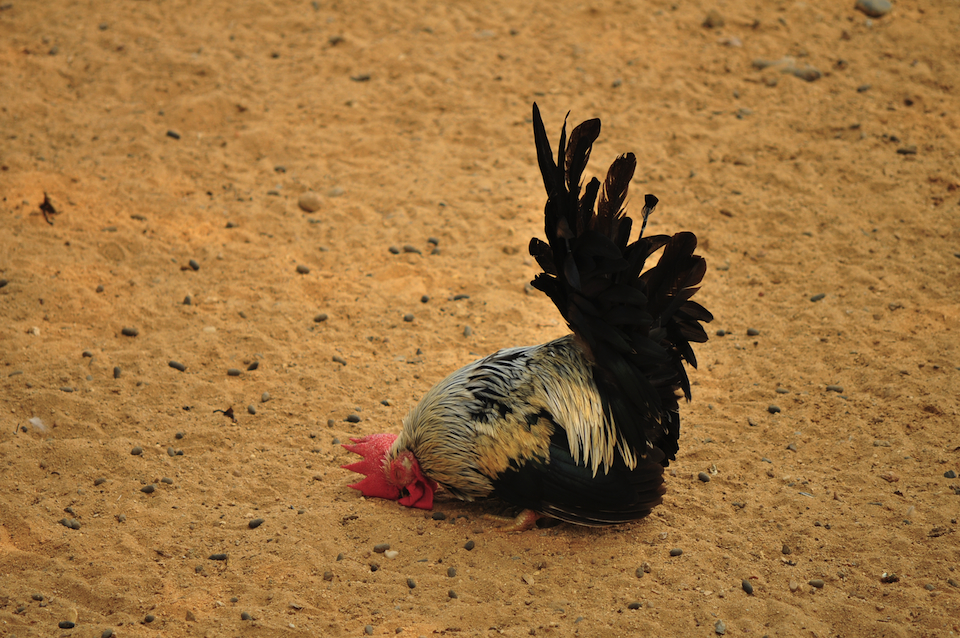 A useful survival technique, should you ever need to fend off a particularly vicious chicken. Another weird Wikipedia article courtesy of the Wikiworm.

A chicken can be hypnotized, or put into a trance, by holding its head down against the ground, and drawing a line along the ground with a stick or a finger, starting at the beak and extending straight outward in front of the chicken. If the chicken is hypnotized in this manner, it will remain immobile for somewhere between 15 seconds and 30 minutes, continuing to stare at the line. Ethologists refer to this state as ‘tonic immobility‘ i.e. a natural state of semi-paralysis that some animals enter when presented with a threat, which is probably a defensive mechanism intended to feign death, albeit rather poorly.

One technique of hypnosis is to hold the chicken face up with its back on the ground, and then run a finger downwards from the chicken’s wattles to just above its vent. The chicken’s feet are exposed, which allows easy application of medication for foot mites, etc. Clapping hands or giving the chicken a gentle shove will awaken it.

One can also hypnotize a chicken by mimicking how it sleeps – with its head under its wing. In this method, hold the bird firmly, placing its head under its wing, then, gently rock the chicken back and forth and set it very carefully on the ground. It should stay in the same position for about 30 seconds. H.B. Gibson, in his book Hypnosis – its Nature and Therapeutic Uses, states that the record period for a chicken remaining in hypnosis is 3 hours 47 minutes.

Helmut Kohl, German statesman. Herr Kohl’s preferred method seems to be similar to that used by Werner Herzog, he used “a line drawn by chalk”.

Werner Herzog. “known to hypnotize chickens; he also hypnotized the cast of his 1976 film Heart of Glass”

Steve Fairnie, 1980s British musician: “You have to dominate the chicken and be right above it staring into its eyes. Then it will either go under or it will attack you, so you have to be a bit careful…” (Fan-club magazine, 1983)

Friedrich Nietzsche, renowned 19th-century German philosopher, in his book Thus Spoke Zarathustra used a philosophical metaphor referring to the hypnosis of the chicken. It is in Chapter 6, “The Pale Criminal”, and reads as follows: “The streak of chalk bewitcheth the hen; the stroke he struck bewitched his weak reason. Madness AFTER the deed, I call this.”