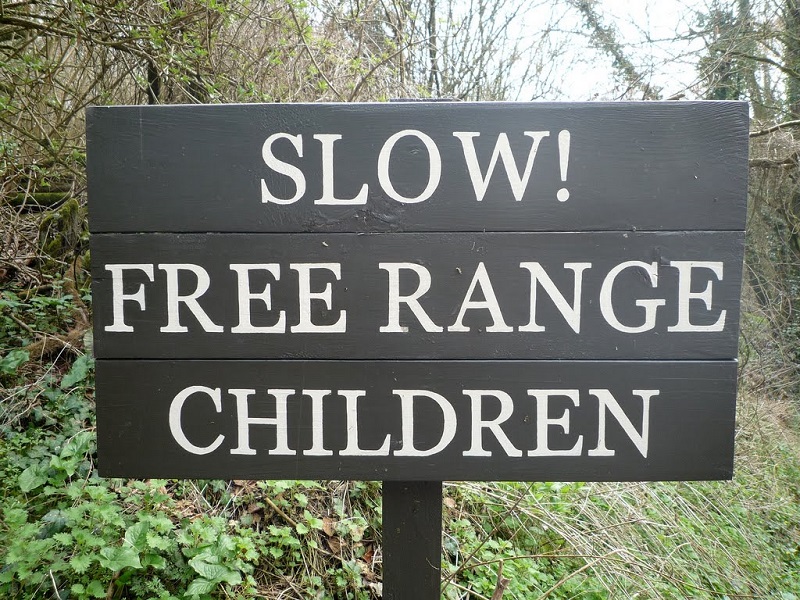 Rita turns her attention to every parent’s worst nightmare: the bad babysitter…

“I’m fine Mom, I’m in the basement building a laser machine,” said my ten year old son when I phoned home to check on him. It was the first time I left him home alone. That was back in the golden age of “free range” parenting (as it is now labeled). Today I could be charged with child endangerment, especially if it turned out the laser worked. For we are now living in the fearful new world of “helicopter” parenting where the worst case scenario rules.

Case in point: a Silver Spring couple were recently investigated by Child Protective Services because they allowed their two children, aged ten and six, to walk home alone from a neighborhood park. The police received more than one call from concerned busybodies shocked at what used to be a normal sight, two children walking along hand in hand. The local news story made national headlines and ignited an emotionally charged debate on parenting blogs. The parents were threatened with the immediate removal of their children unless they signed a “responsible supervision plan.” Interviewed on TV, they seemed like lovely people bringing up their children to be independent and resourceful.

I grew up in a time and place where it was normal for children to play unsupervised on the rubble of bombing sites from the Blitz. My own children grew up with a gradually expanding free range of the neighborhood, playing in a narrow copse of trees that was big enough for them to call “the woods.” They walked home alone from school with no calls to the police from concerned neighbors. Looking back I think there was more cause for concern when I left them with babysitters.

Nowadays helicopter parents install surveillance video cameras to monitor the performance of their babysitters. Back in my day we had to rely on instinct and reports from the children themselves, not always forthcoming.

I heard many hair-raising stories years after they occurred. Like the overweight babysitter who sat on my daughter’s chest until she could hardly breath because she refused to tidy her room. I did fire that woman eventually for a case of very poor judgment. My daughter fell off her bike. A neighbor alerted me at work, but when I called the babysitter she described it as a typical little scrape and there was no need for me to come home. Hours later I returned to find my daughter lying on the couch, her face so swollen she was unrecognizable. Her lip was split and bleeding and half of her front tooth was missing. (She has had a fake front tooth ever since). I was incredulous that this woman could call it a little scrape. Once she was fired the children’s stories of her bad behavior poured out. So much for thinking an adult sitter would be more responsible than a teenager!

Of the many teenagers who babysat in my home over the years, there is one I will never forget. Let’s call her Susie. She had a bubbly personality and seemed popular with the children. Perhaps, in retrospect, because she ignored them. I began to get an uncomfortable feeling that she was going through my things. I couldn’t quite put my finger on it but things seemed out of place, riffled through. I’m compulsively tidy so I notice such things. But there was nothing concrete to confront her with until the day something went missing. It was my diaphragm.

I kept the diaphragm in its pink plastic case inside my bedside table drawer. There was simply no place else I would have put it, and Susie had been at the house the evening before. But how do you accuse a young teenage girl of something like this? And what if I was wrong? I decided to tackle the problem obliquely. I would ask for Susie’s help. The next time she came over I told her I had mislaid a small pink plastic box and if she came across anything like that while she was in the house would she please put it in my bedroom. I thought she had a bit of a deer-in-the-headlights reaction but it could have been my imagination. When I got home nothing was said on the subject by either of us. Not quite as bubbly as usual, she took her money and practically ran out the door.

Upstairs I opened my bedside drawer. There was the pink plastic case. Almost doubting myself, I picked it up. Had it been there all along and I had imagined the disappearance? I opened it and there was my diaphragm. But that was not all. Nestled inside it was a condom, fortunately still pristine in its unopened packet. I imagined a group of teenage girls giggling over a show-and-tell collection of contraceptive gear. At least I hoped that was all that had happened.

The next morning I called my doctor to order a new diaphragm. And I received a call from Susie’s mother to let me know that she wasn’t interested in babysitting any more.

I’m all for free range kids, but free range teenagers are quite another matter.

2 thoughts on “The Babysitter”