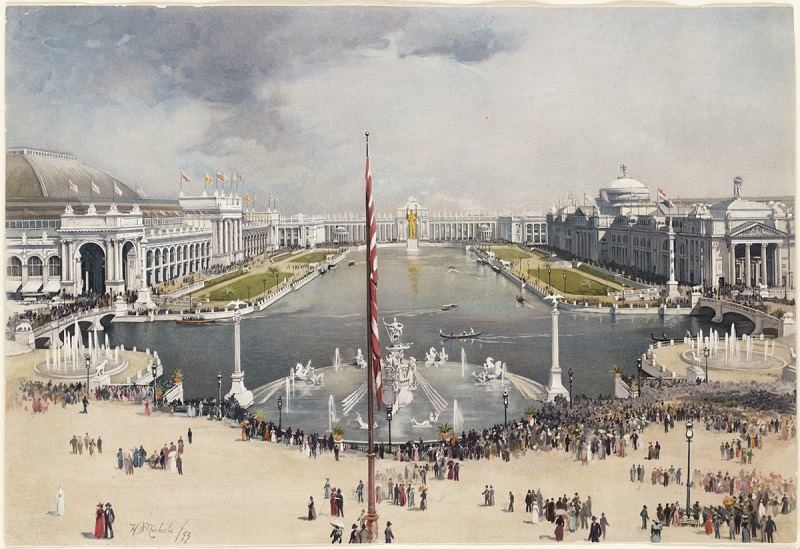 According to Erik Larsen in The Devil in the White City, visitors to the 1893 Chicago World’s Fair [above] were able to drop their children at an official daycare and retrieve them by claim check in the evening. The only child never reclaimed by his parents that summer was a boy named Charlie Johnson. Armed with Larsen’s single mention, I spent all of five minutes researching the story – just long enough to learn nothing solid and yet develop a fanciful hypothesis I’m loath to spoil by looking into it any deeper.

I would very much like to believe that the orphaned Charlie Johnson mentioned by Larsen was the illegitimate namesake son of a famous Mormon photographer and an unknown vaudeville actress.

Charles Ellis Johnson was known for his stereographs of Utah landmarks like the Saltair Pavilion and the freshly dedicated Mormon Tabernacle in Salt Lake City. He also had a sideline making boudoir portraits of burlesque dancers and actress. One of his subjects was the poet, spiritualist and sometime-actress Ella Wheeler Wilcox, whom I can’t help mentioning. Advised by Johnson that one of his coreligionists found a photograph of her distasteful, Wilcox replied: “Tell the gentleman that I am sorry he should object to a little bit of neck. He probably had a surfeit of necks in his plural wives, and it gave him a sort of physical indigestion. You see what a terrible thing polygamy is sometimes, when it unfits a man for appreciating a pretty shoulder.”

I do not suggest that Wilcox was our Charlie’s mother. Johnson photographed innumerable young women who might have been more susceptible to smooth talk and promises of free publicity: nameless dance hall lovelies wrapped in white tulle to simulate nudity, some cradling kittens to their erupting bosoms, others half-undressed and having all kinds of trouble with their stockings. One of these unknowns, by my theory, was our young Charlie’s mother. I do not know her name.

As I imagine it, she’d given birth to Charlie in 1890 or ‘91 and named the boy for his absent father, believing still that Johnson would leave his wife (a later daughter of Brigham Young) and run off with her instead. Of course he didn’t. He may have sent money from time to time, but never enough, and his erstwhile mistress and their child spent bleak winter nights eating beans and oatmeal in a cold Denver hovel, perhaps, or in Reno. Little Charlie’s mother threatened to write the Salt Lake papers and expose her former lover, but she failed to stir him.

One way or another she learned that Johnson would attend the Chicago World’s Columbian Exposition in company with the Mormon Tabernacle Choir. (It is a fact that he did so.) She used the near-last of her funds for a ticket to Chicago. Johnson had never seen his son in the flesh; perhaps, she thought, his heart would soften when he did. Underfed and without proper accommodation, the toddler and young mother loitered near the fairground entrance at Jackson Park for several days until, by sheer luck, they found themselves face to face with the whiskered photographer. 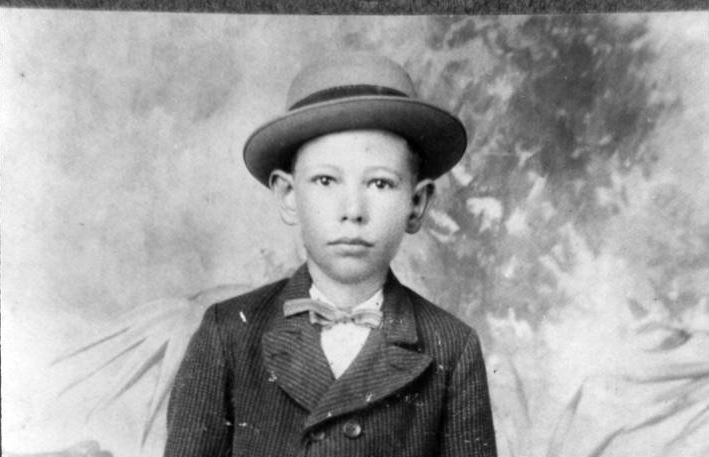 In my fantasy, Johnson gave a shutter click of recognition when he saw her, a give-away blink. He liked to say that he never forgot a subject. Then he looked down at the ragged boy, nodded once, and strode off into the swirling crowd without a single word. His heart had not softened. Charlie’s mother used the last of her money to buy tickets to the Exposition and a piece of taffy for Charles Jr. They wandered through the White City for an hour or two, holding hands, before she dropped him at the daycare, giving his name in exchange for a claim check. This, I suggest, she ate. Then she vanished too.

What became of the boy? Perhaps the Charlie Johnson abandoned at the Chicago World’s Fair in 1893 is the same Charley Johnson adopted by George Brown of Charlotte County, Florida some time later. There’s a photograph of him in the county archives [above] – at ten or twelve years old – wearing a tan bowler and pinstripe suit of second quality with the sleeves cut short. Maybe, by some miracle, this Charley Johnson is also the same Charlie Johnson (born in 1891, supposedly in Philadelphia) who went on to become a well-known jazz pianist and band leader of the Paradise Ten from 1925 to 1938.

There are other options, of course. The name is by no means uncommon, and neither, unfortunately, is ophanhood. There is no end of Charlie Johnsons.