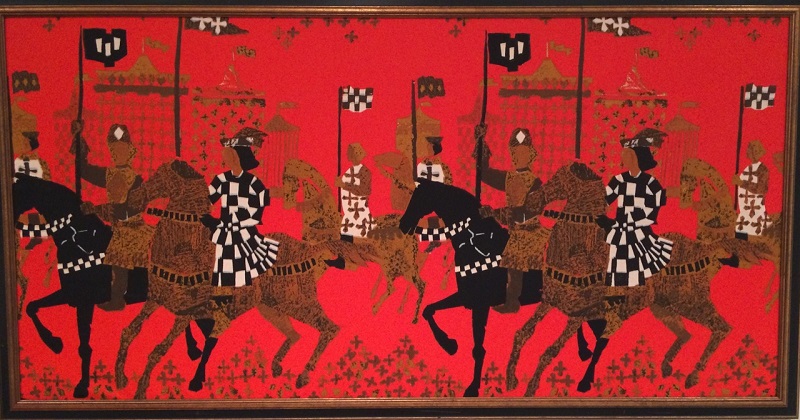 Jousting may have gone out of fashion in the Old World some time in the seventeenth century, but here in Maryland it is still going strong, in fact it is the official State Sport…

I discovered this unlikely fact in a serendipitous way. Browsing a neighborhood flea market one day I came upon a length of cloth with the images of knights on horseback silhouetted in black, white, and gold against a bright reddish orange background [above]. It was a striking graphic image and one I thought would go well with the brass rubbings and antique maps in my home that reflect my love of history. I bought the fabric and had it handsomely framed in black trimmed with gold. The first time my future husband, a native Marylander, came to my house and saw my medieval knights he exclaimed “Ah, the Maryland State Sport!” To say I was surprised would be an understatement. The fact that there was even such a thing as an official state sport was weird enough, but jousting? How had this come about? I discovered that, like many things in American life, it all came down to the personal obsession of one politician.

Jousting tournaments have been held in Maryland since colonial times when Cecil Calvert, Lord Baltimore, introduced the sport. By that time it no longer involved knights in armour charging at one another in mortal combat. By the reign of James I “running at the rings” jousting, which began as a training exercise, had replaced actual combat in most English tournaments. This is the style still played in Maryland. Contestants gallop down an 80 yard course with three rings suspended from archways along the way. The goal is to catch all three rings with the point of the lance. The rings can vary in size according to the skill level of the contestants. Maryland’s sport retains many of the trappings and traditions of its medieval origins. Contestants often dress in medieval garb and are addressed as “Knight” or “Maid.” (Yes, unlike the fair maids of olde, women can compete). Many contestants come up with fanciful names; “Maid of Dragon’s Lair” is a particularly nice one I came across. Before the contest there is a horseback parade led by riders waving the U.S. and Maryland flags. Afterwards the winner gets to “crown” his chosen maid, (or knight if the winner is a woman) with a wreath of flowers.

Jousting in Maryland began as a gentleman’s sport but evolved into a family tradition in rural farming communities, especially in Southern Maryland. It’s not an expensive sport to indulge in. If you live in the country and already have a horse all you need is a lance. Since they are not exactly easily obtained in the modern world contestants usually make their own out of a broom handle or a pool cue. Just sharpen the end and attach a nail and you’re good to go. Jousting might have faded quietly away by the mid-nineteenth century but it received a sudden boost in popularity after the Civil War. Among Confederate veterans and their families jousting reflected nostalgia for an idealized lost world of chivalry and romance. Southern Maryland in particular identified with the “old South” and a traditional rural way of life. Jousting might have faded away again in the twentieth century (only four people attended the first meeting of the Maryland Jousting Tournament Association in 1950) but the sport soon found an indefatigable advocate in the Honorable Henry J. Fowler, a State delegate from St. Mary’s County. 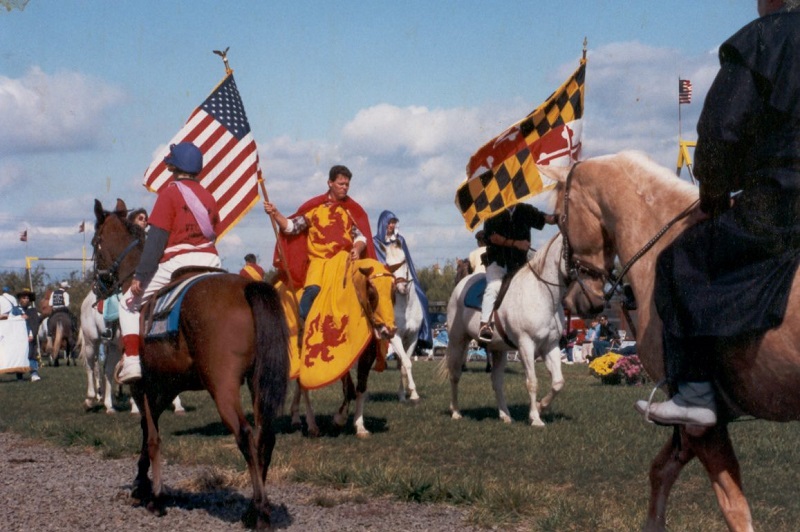 Delegate Fowler, a jousting enthusiast himself and President of the Maryland Jousting Tournament Association, fought for Maryland to do something that no other state had yet done, name an official State Sport. (Only a handful of states have done so since; in Minnesota it is ice fishing). Fowler used his position as chairman of the State Entertainment Committee to lobby tirelessly for his favorite sport. He claimed that jousting best represented the chivalrous motto on the Great Seal of Maryland, “manly deeds and womanly words.” One imagines him prowling the halls of the State House in Annapolis boring everyone to tears with his jousting anecdotes. But persistence paid off, and in 1962 Maryland’s Governor J. Millard Tawes signed House Bill No. 80 into law making jousting the official State Sport. Fowler’s fight was not over however. In the ensuing years rival delegates tried to have their own favorite sports supplant jousting. The most popular alternative was lacrosse, a sport with much larger participation in the state than jousting. But each time a bill was proposed the wily Fowler managed to defeat it. It wasn’t until long after his death that lacrosse won a partial victory. It did not replace jousting, but henceforth shared the honors by being named official State Team Sport in 2004. One imagines Fowler brandishing his heavenly lance in fury at the indignity.

So if you ever wonder what State delegates are really doing when they are supposed to be solving all the serious problems facing their constituents, this story is one answer. And it isn’t just favorite sports that consume them. Maryland’s state delegates have also spent time on naming an official State Dinosaur, the astrodon johnstoni who roamed Maryland during the Early Cretaceous period, and an official State Fossil, the ecphora gardnerae, a snail who lived in the tidal waters of the Chesapeake during the Miocene era. So far there are no rival claimants to their crowns.

5 thoughts on “Jousting Lives On in Maryland”