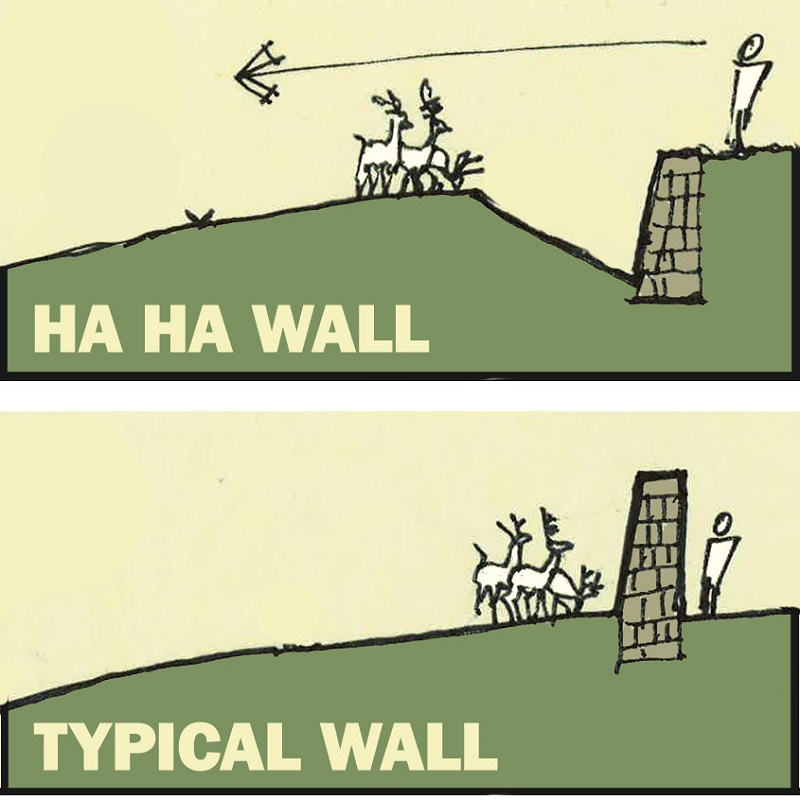 Writers of science fiction are fond of the invisible force-field, an unseen barrier which unexpectedly stops a spaceman, or the evil Thargon, in his tracks. Landscape gardeners of the eighteenth century had much the same idea with the invention of the ha-ha. This is a sunken wall, its top at ground level, and bounded on the outer side by a ditch. From even a short distance, then, it cannot be seen, and the sweeping view of the gorgeous grounds is uninterrupted. It is an invisible force-field.

“Ha-ha” would seem to be a variant of the original French “ah-ah”, in which form it first appeared in English. Clearly it expresses the element of surprise, no different for the eighteenth century person strolling in the gardens of a stately home than for the spaceman or the evil Thargon bashing up against an invisible force-field in a distant galaxy in the forty-sixth century.

One such stroller, on an eighteenth century afternoon, was Ned Slop, a factotum in the service of Baron Plunkett of Plunkett Hall. Slop had been instructed to prune a filbert hedge, and was making his way towards it, armed with a pair of shears, when his course took him for a time along one side of the ha-ha. As a factotum of some eighty winters, Slop knew every inch of Plunkett Hall and its magnificent parkland, its ha-has and filbert hedges, so as he reached the ha-ha he had no grounds to be surprised. Nonetheless, on this particular afternoon, he did indeed cry “Ah! Ah!” upon arriving at the ha-ha, and he dropped his shears and hurried at once back to Plunkett Hall.

True hurry was not within Slop’s gifts, however, for he was an ancient and creaking factotum whose movements were akin to those of a Beckettian tramp. Indeed it was almost dusk before he staggered into the library, where he found Baron Plunkett. The baron was a scholarly baron, and on this eighteenth century dusk he had his head buried in a huge leather-bound copy of Pontoppidan’s Explanations. He looked up as Slop stood panting in the doorway.

What is it, Slop? Are the filbert hedges duly pruned?, said the baron.

Pant pant pant, panted Slop, Not yet sir, if it please your baronial magnificence, for before I was able to prune the filbert hedges I came upon something untoward at the ha-ha.

I don’t rightly know how to describe it, sir, except to say there was a bit of a brouhaha.

It is not the first time there has been a brouhaha at the ha-ha, said the baron, I expect it is merely an intoxicated peasant or toppled poacher. Now, pray, leave me to my Pontoppidan.

‘Tis neither peasant nor poacher so far as I can descry, said Slop, I know full well the sorts of brouhahas they cause, what with their intoxication and illegal rabbits and so forth. No, sir, this is a brouhaha of quite another kidney and one I feel duty bound as a loyal factotum of some eighty winters to report to you, that you may take whatever steps you deem necessary to address it.

Baron Plunkett sighed and put down his Pontoppidan on a side table and heaved himself to his gout-ridden feet.

Very well, Slop, fetch my stick, would you?

And so, in the dim dusk, the baron and his factotum went a-hobbling and a-creaking across the majestic lawns towards the ha-ha.

Christ’s wounds!, cried the baron, when eventually they reached the spot, This is more than a mere brouhaha, Slop! This is an inexplicable calamity! You did well to alert me to it.

For before their eyes, the ha-ha was littered with the dead, distorted bodies of several peasants and poachers and widow-women, each twisted beyond recognition and horribly disembrangulated.

So inexplicable a calamity, continued the baron, That I dare say not even my revered Pontoppidan could explain it in his Explanations.

Ought I hie back to the library to fetch your tome, sir?, asked Slop.

No, no, good Slop, that will not be necessary. For cast your eyes thither!

And Baron Plunkett pointed to the ground some yards away to the left, where, from the ha-ha, a trail of noisome green translucent foul bubbling slime stretched across the lawns towards the filbert hedges.

Let us follow the trail, Slop, said the baron, And we shall discover who – or what – has wrought such hideous horror and disembrangulation.

B-b-but will we not suffer the same awful fate as the peasants and poachers and widow-women there sprawled dead in the ha-ha?, wailed Slop.

Fear not, Slop, said the baron, I am a baron and a gentleman and I am armed with a stick. None durst tangle with me. To do so would be socially unthinkable in this our eighteenth century.

So the baron and his factotum followed the trail, and that is how they came face to face with the evil Thargon, whose time-travelling voyage had suddenly and unexpectedly come clunk! to a halt. The space creature had hit an invisible force-field in the shape of the Plunkett Hall ha-ha.

As Ned Slop cowered and piddled in his pants, the baron strode forward and waved his stick at the vile shapeless jelly-like pulsating green and yellow and mauve monocular repellent many-antennae’d squelchy throbbing sucking and seething blob that was the evil Thargon.

Get off my land at once, cried the baron, and he whacked the space monster with his stick, whereupon it dissolved in a disgusting belch of vapour.

Come, Slop, let us return to the Hall. I shall read further in Pontoppidan, and you may spend the rest of the evening scrubbing boots and doing other tasks appropriate to your lowly station.

And far far away, distant in both time and space, the populations of several planetoids rejoiced at the defeat of the evil Thargon. 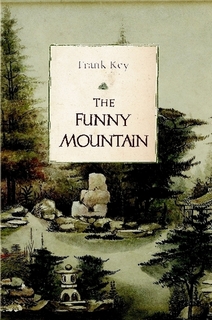 This story is taken from Frank Key’s new paperback, The Funny Mountain, which is available to buy here.

One thought on “Ha-Ha Brouhaha”