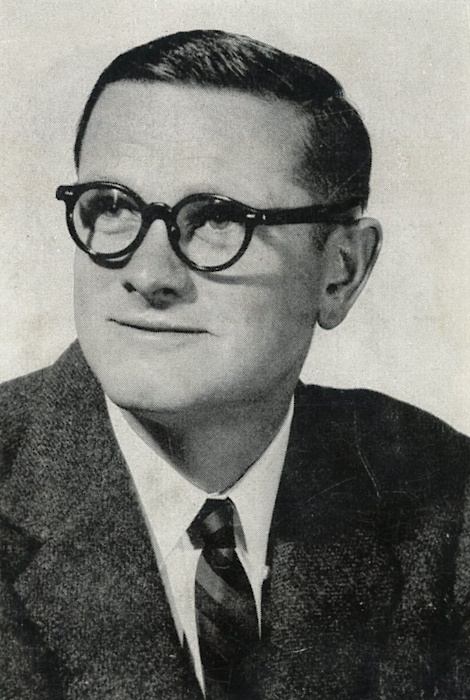 A best-selling author shifting millions of books in the post-war decades, a renowned public intellectual, a friend of celebrities such as Marlon Brando, a highly respected political scientist and famous enough to feature in an advert for Ballantine Ale, Eugene Burdick’s career was tragically cut short when he died of a heart attack in 1965, aged just 46.

He’s now an almost completely forgotten figure, so obscure that the majority of his books do not even merit their own Wikipedia pages and the only people I encounter who know of him are those I’ve already shared the mystery of his obscurity with.

The unpopularity of his views on Vietnam – he combined liberalism with fierce anti-communism, making him a public supporter of the US government’s military intervention – don’t really explain this obscurity, especially as they trigged his novel turned successful Marlon Brando movie The Ugly American. Nor does his choice of topics, for three of his novels have themes which should make them frequent contemporary reference points.

The Ninth Wave, published in 1956, follows a political campaign complete with then cutting-edge innovations of opinion polling, computers and the use of campaign consultants. Though we now know – even in a world of Facebook and Obama – that data and numbers can’t quite predict and control political outcomes in the way the book lays out, the world has turned out close enough to Burdick’s picture of the future to make The Ninth Wave a prescient and still relevant story, and one that should be loved by people who are into the mechanics of politics, despite the rather uneven quality of the writing (caused in part by it being ‘written’ via dictation without subsequent editing.)

Loved too should be Burdick’s 1965 novel, The 480. The title is a reference to the 480 different groups the electorate has been divided into by that novel’s political campaign stars – a set of slicing and dicing closely based on the real work done by John F Kennedy’s 1960 Presidential election campaign.

As with The Ninth Wave, we know political campaigning has turned out to have a greater role for art than the pure-science envisaged in the novel, but once again it’s easier to see how the book could have remained a favourite of political geeks rather than one that faded into obscurity, especially given the JFK-approved veneer it gives to modern targeting techniques.

Then there is his 1962 Cold War nuclear drama Fail-Safe, co-written with Harvey Wheeler about a series of mistakes which result in a US nuclear bomber force heading off to obliterate Moscow. Made into a successful film directed by Sidney Lumet and staring Henry Fonda and Walter Matthau, its subsequent obscurity (save for a televised play in 2000) is at least more understandable in that the year of the film’s release, 1964, also saw Dr. Strangelove hit the cinema.

Fail-Safe may have been a good movie (and you can enjoy its trailer here) but Dr. Stranglove, with a similar subject matter, was an all-time classic movie.

Indeed, Fail-Safe was so similar to Red Alert, the book on which Dr. Strangelove was based, that legal action was taken for copyright infringement, with a view to delaying the Fail-Safe movie until after Dr. Strangelove has been released. The result was both an out-of-court settlement and Dr Strangelove indeed getting released first. (Somewhat confusingly, this Burdick work was originally was published in Britain with a different title – Red Alert – and with the author using a different name, Peter Bryant.)

Yet none of that really explains why Eugene Burdick has so firmly disappeared from view. So if you like political thrillers, Cold War dramas or both – take a look at his work and enjoy.

4 thoughts on “The strange obscurity of Eugene Burdick”