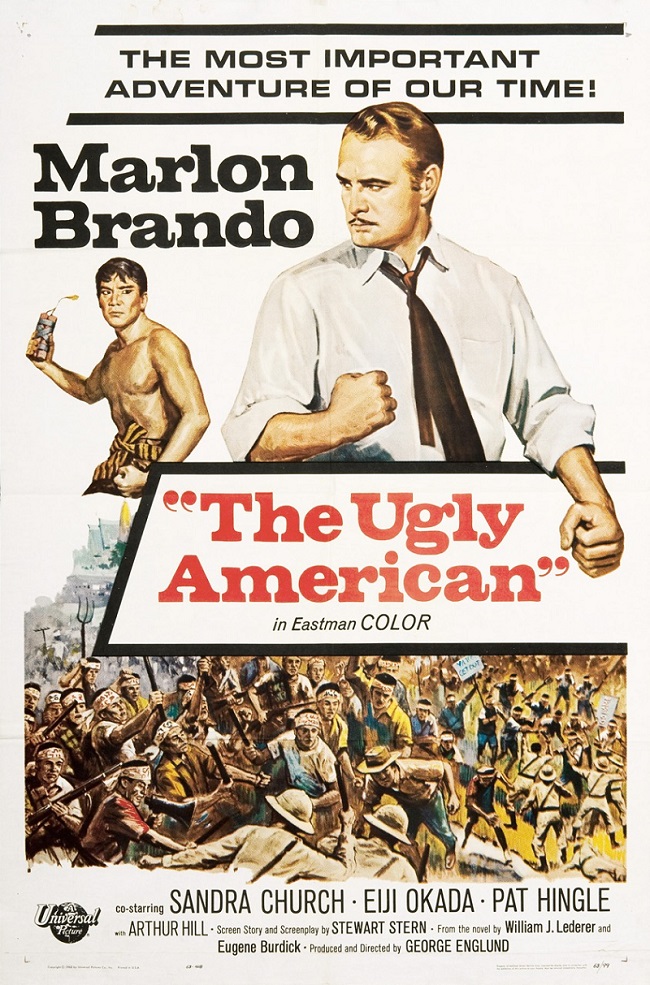 Rita is tired of the worldwide image of the Ugly American, and explains why in her usual mild, non-confrontational way…

The first Americans I ever met were disguised as Canadians. They had sewn maple leaf patches onto their backpacks because they were so tired of being confronted about the Vietnam war wherever they traveled in Europe. They were not ashamed of being American, but they were ashamed of the actions of their government in Southeast Asia. They did not want to be confused with the Ugly American stereotype that dominated British attitudes to our cousins across the ocean at the time. The prescient 1958 novel The Ugly American by Eugene Burdick and William Lederer first popularized the phrase. In 1963, the year American troops first routinely engaged in combat in Vietnam, the book was made into a film starring Marlon Brando. Ironically, the title character Homer Atkins, though physically ugly, is the good guy of the story. His humanitarian plans to help the people of Southeast Asia are contrasted with the soulless bureaucrats’ arrogance and blundering incompetence. Nevertheless, his soubriquet became shorthand for all the perceived flaws in the American character, especially when meddling overseas. The fake Canadians I met were not denying their American nationality as much as asking to be judged as individuals.

Today it is easy to find examples of the Ugly American stereotype grabbing headlines across the media: bloviating politicians, hate-spewing pastors, gun-toting survivalists, science deniers, and conspiracy theorists galore. (Have you heard the one about President Obama deliberately bringing Ebola to America to infect Christians so he can establish an American caliphate?) And foreign misadventures since the Vietnam era have done little to dispel the Ugly American image abroad. The notorious ignorance of world geography endemic in the American populace suggests a peace campaign along the lines of “if you can’t find it on a map don’t bomb it.” I once had to share a dinner table with a man who, after declaring his vehement support for the Iraq war, went on to state that he wasn’t really interested in the outside world and had no desire to travel there, America was good enough for him.

But the not-so-ugly Americans seem to get less attention. Like the fictional Homer Atkins they are curious and knowledgeable about the world, they travel abroad with idealistic humanitarian goals, and they show respect for foreign cultures. They are recent college graduates or empty nesters who join the Peace Corps, which despite conspiracy theories about CIA involvement, attracts idealists with a sincere belief in the organization’s mission “to promote world peace and friendship.”  They are doctors and nurses who join the Red Cross or Doctors Without Borders to bring medical care to remote populations and fight deadly diseases, like Ebola. They are journalists committed to the truth who brave war zones to get the story out to the wider world. At home they are the countless Americans who volunteer time and money to help those less fortunate than themselves. In my own life in America I have known far more of the not-so-ugly than the other sort.

We rarely hear of these good Americans unless something horrible happens to them, like beheading or catching Ebola. James Foley and Steven Sotloff were dedicated journalists determined to tell the stories of the suffering Syrian people. They weren’t the problem, but ISIS beheaded them anyway. Dr. Kent Brantly, Dr. Craig Spencer, and other medical workers who contracted Ebola in West Africa risked their own lives to stop the spread of a deadly plague. American nurses are on the front lines treating Ebola patients at home and abroad. But as demonstrated in the case of Kaci Hickox, the nurse who returned from Sierra Leone only to face a medically unnecessary quarantine, people stoked with fear do not always respond to their efforts with gratitude.

The ugly Americans, those plentiful loudmouths who spread misinformation, hysteria, and ever more insane conspiracy theories, often for political gain, are rarely called to account. But when things go wrong it always seems to be the not-so-ugly Americans who pay the price.