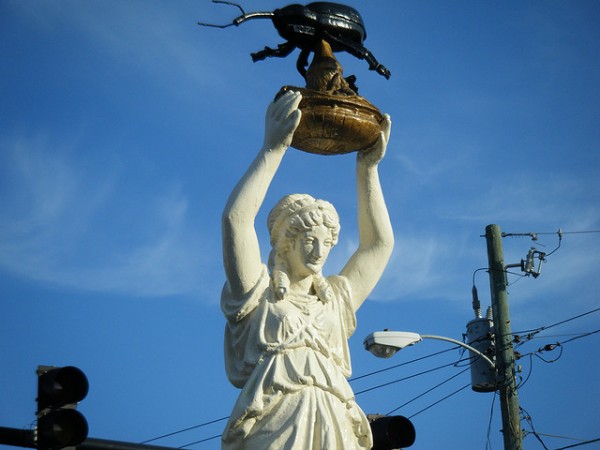 ‘Fear no weevil’ is the motto of this Alabama town, a place that likes weevils so much they’ve even built a monument to them. Another strange Wikipedia article discovered by the Wikiworm…

The Boll Weevil Monument in downtown Enterprise, Alabama, United States is a prominent landmark and tribute erected by the citizens of Enterprise in 1919 to show their appreciation to an insect, the boll weevil, for its profound influence on the area’s agriculture and economy. Hailing the beetle as a “herald of prosperity,” it stands as the world’s only monument built to honor an agricultural pest.

The boll weevil (Anthonomus grandis) was indigenous to Mexico, but appeared in Alabama in 1915. By 1918 farmers were losing whole cotton crops to the beetle. H. M. Sessions saw this as an opportunity to convert the area to peanut farming. In 1916 he convinced C. W. Baston, an indebted farmer, to back his venture. The first crop paid off their debts and was bought by farmers seeking to change to peanut farming. Cotton was grown again, but farmers learned to diversify their crops, a practice which brought new money to Coffee County.

Bon Fleming, a local businessman, came up with the idea to build the monument, and helped to finance the cost. As a tribute to how something disastrous can be a catalyst for change, and a reminder of how the people of Enterprise adjusted in the face of adversity, the monument was dedicated on December 11, 1919 at the intersection of College and Main Street, the heart of the town’s business district.

The monument depicts a female figure in a flowing gown with arms stretched above her head. She raises high a trophy which is topped with a larger than life-size boll weevil. The statue stands atop an ornately detailed base which supports two round streetlamps. The base stands in the center of a fountain, which is surrounded by a wrought-iron railing. The monument stands more than 13 feet (4.0 m) tall.

At the base of the monument appears the following inscription:

“In profound appreciation of the Boll Weevil and what it has done as the herald of prosperity this monument was erected by the citizens of Enterprise, Coffee County, Alabama.”

The original statue of the woman, excluding the fountain and boll weevil, was built in Italy. The boll weevil was not added until thirty years later, when Luther Baker thought the Boll Weevil Monument should have a boll weevil on it. He made the boll weevil and mounted it atop the statue.

The boll weevil, and sometimes even the entire monument, has been stolen many times throughout the years. Each time it was found and repaired by the city of Enterprise until July 11, 1998. On that day vandals ripped the boll weevil out of the statue’s hands and permanently damaged the statue. City leaders were going to repair the original statue and put it back, but it proved too difficult and costly. A polymer-resin replica was erected in its place in downtown Enterprise in 1998, and the original is on display at Enterprise’s Depot Museum, a few hundred feet away.

More extensive information can be found at Weevil Wonderland.