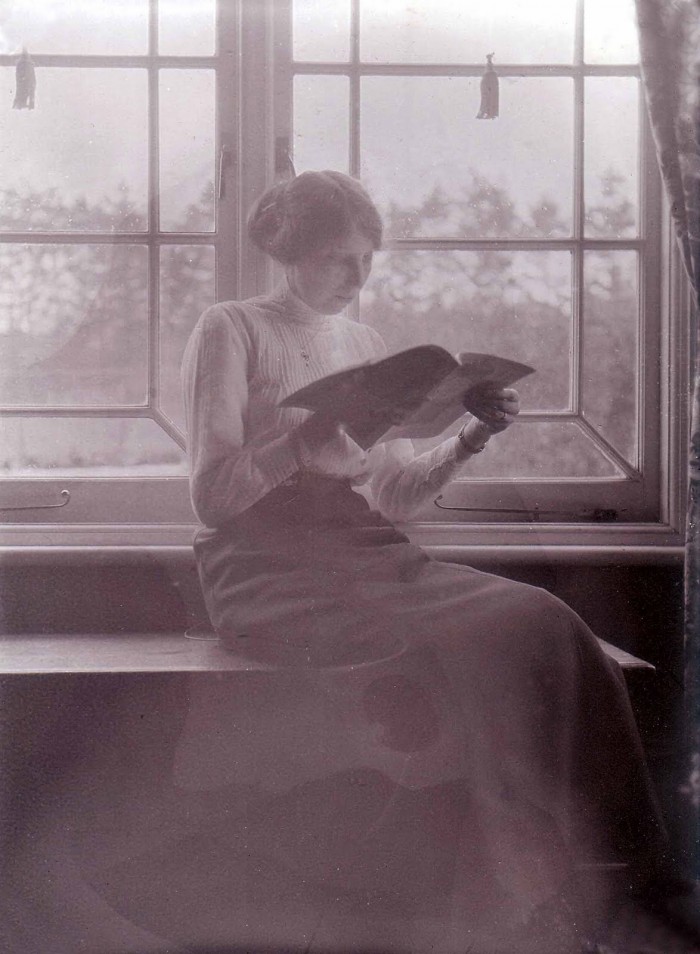 Bookseller Steerforth handles a great many old books in his line of work. Often he’ll find old photos amongst the piles of mildewed tomes, snapshots of lost worlds and forgotten lives. Continuing the series in which he shares some of the more interesting, surprising and moving discoveries, he finds a vivid portrait of a post-Edwardian family…

One day another photograph album appeared in the office. Almost as if it was continuing a narrative, the photos began in the Edwardian age, where this post ended.

The people featured in these images are more solidly middle class, but their story is no different to that family. Born in the Victorian age, they grew up in the cosy complacency of the fin de siècle, unaware of the catastrophe that was about to change their world.

In these photographs, it is the women’s fashions that are the most telling indicator of social change. The contrast between the impractical, ‘feminine’ outfits of the Edwardian era and the more austere, utilitarian clothing of the 1920s is striking. It’s as if 50 years have passed rather then ten.

When my father died I inherited a lot of papers, including an unfinished family history project. I probably won’t complete it, as my family isn’t terribly interesting (even to me), but I did gain an important insight into the impact the First World War had on my ancestors. Reading between the lines, it was quite clear that my grandmother had had a nervous breakdown after her older brother went ‘missing’ after the Battle of Loos. It was never acknowledged as a breakdown, but she was unable to work for six years.

Much has been written about ‘shell shock’ but what was the psychological impact on a generation of women who lost brothers, fathers, husbands, sweethearts and friends? (I think it’s time to read ‘Testament of Youth’)

In the meantime, here are the photos: 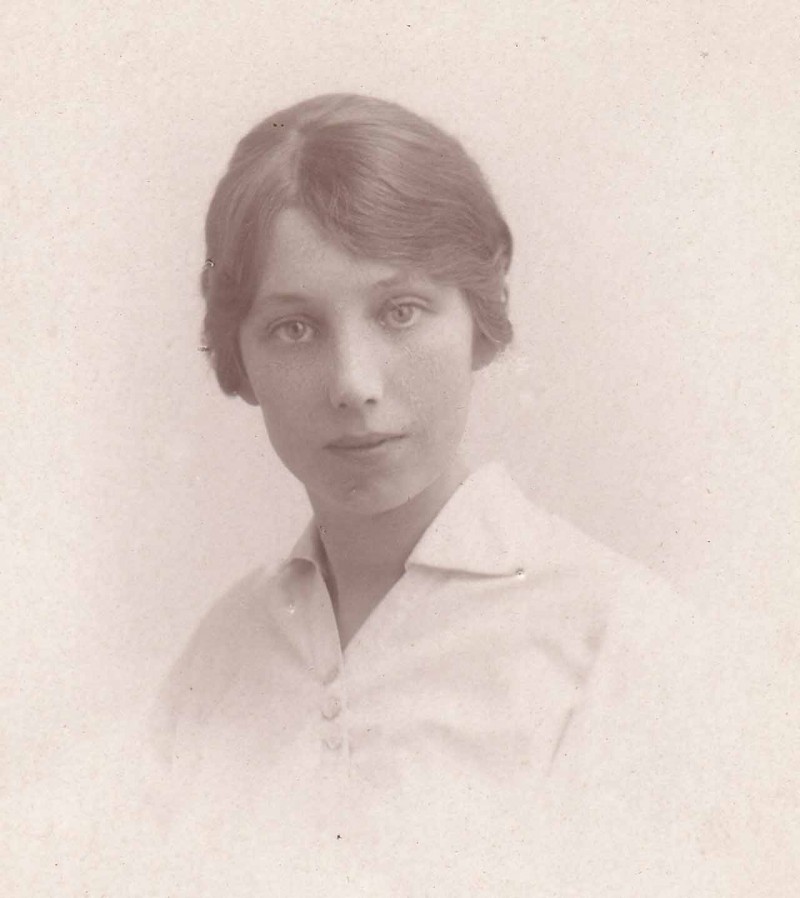 This woman features in many of the pictures. I like her intelligent, enquiring face and clear eyes. She looks like someone who would have been worth meeting. I wonder if our lives overlapped?

Here she is as a teenager: 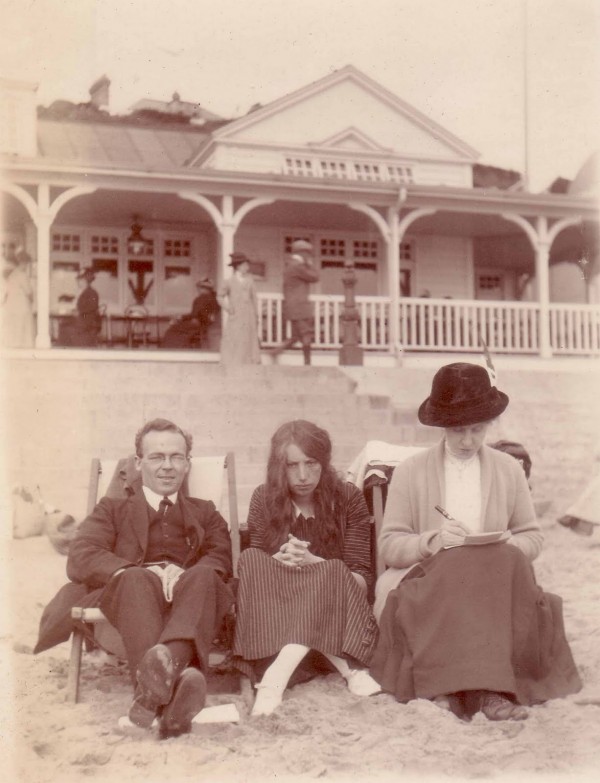 This is a wonderful picture of three generations and I felt that it deserved to be enlarged: 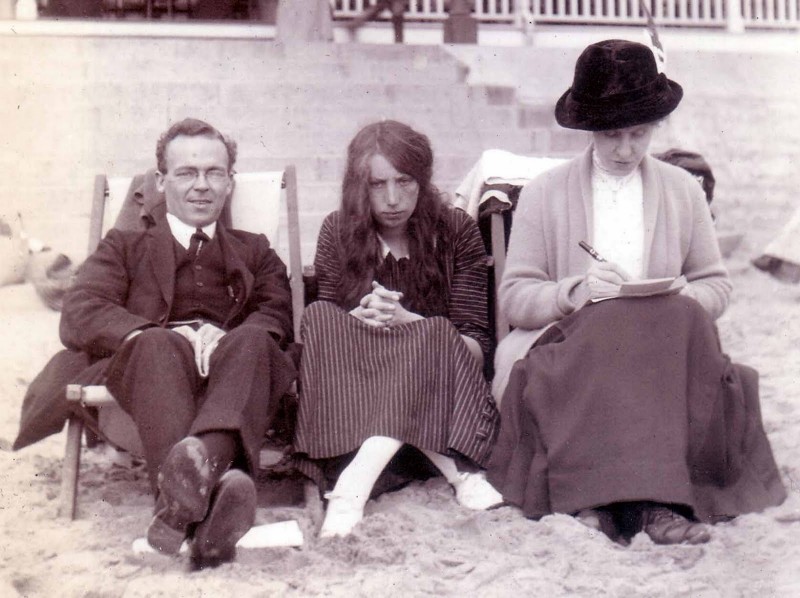 I know exactly how the girl feels, but I now also empathise with the father. I like the way the grandmother is ignoring the photographer and continuing to write her letter. 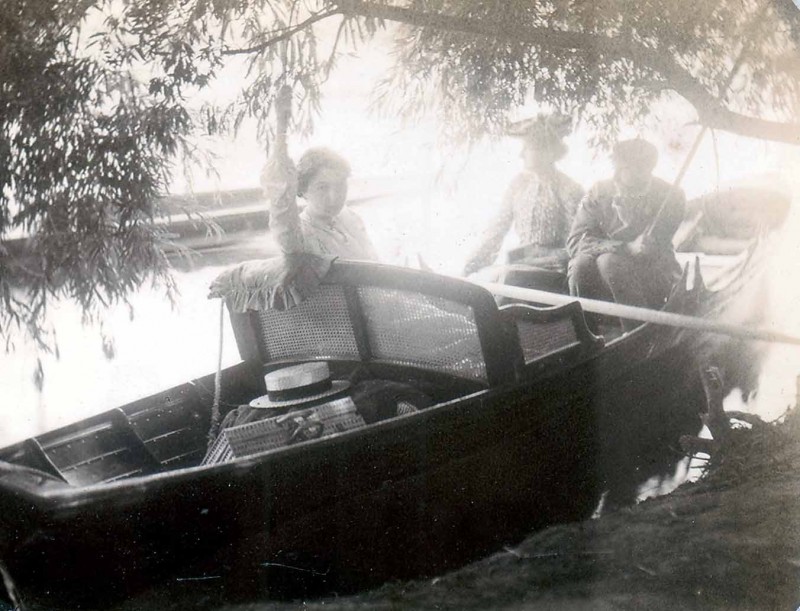 If I had a time machine, I’d type in the coordinates of this scene and join them. I particularly like the straw hamper and boater. 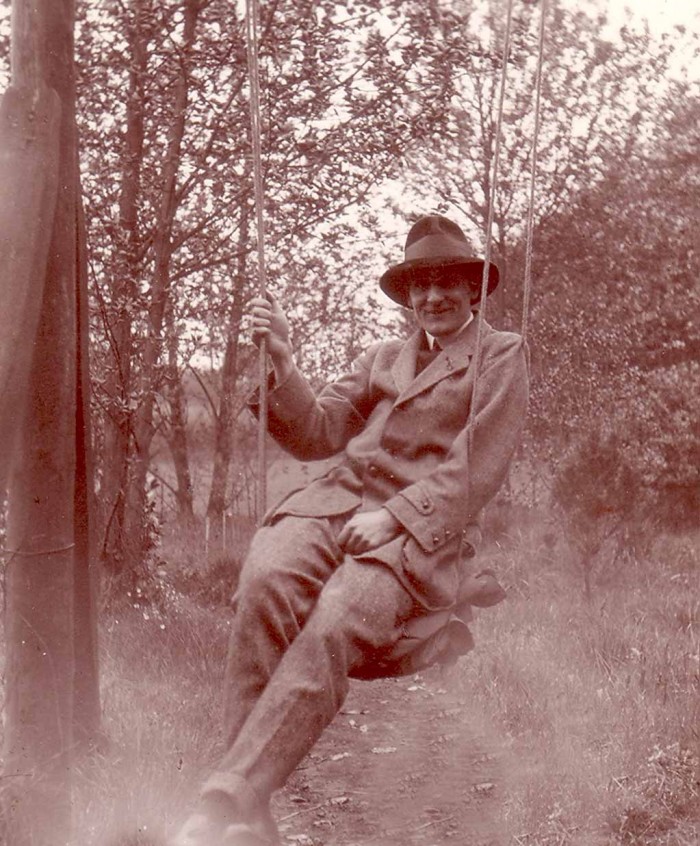 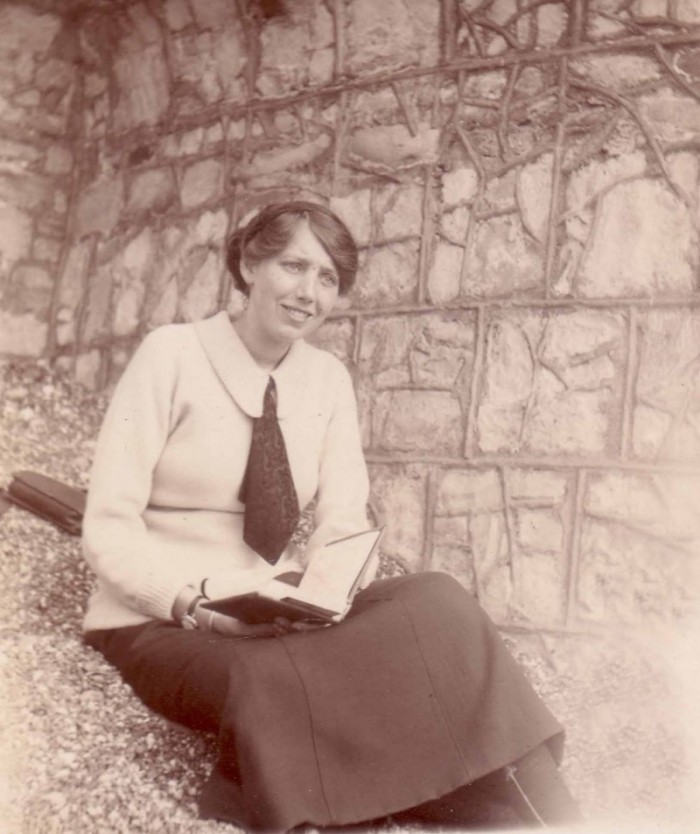 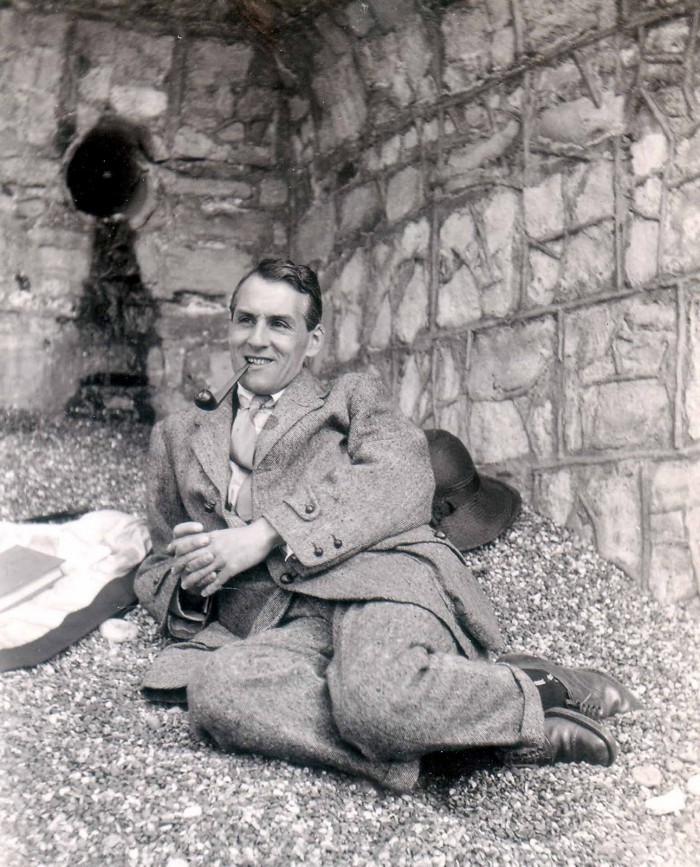 This gentleman seems remarkably sanguine, given that he’s sitting directly underneath a raw sewerage outflow pipe. 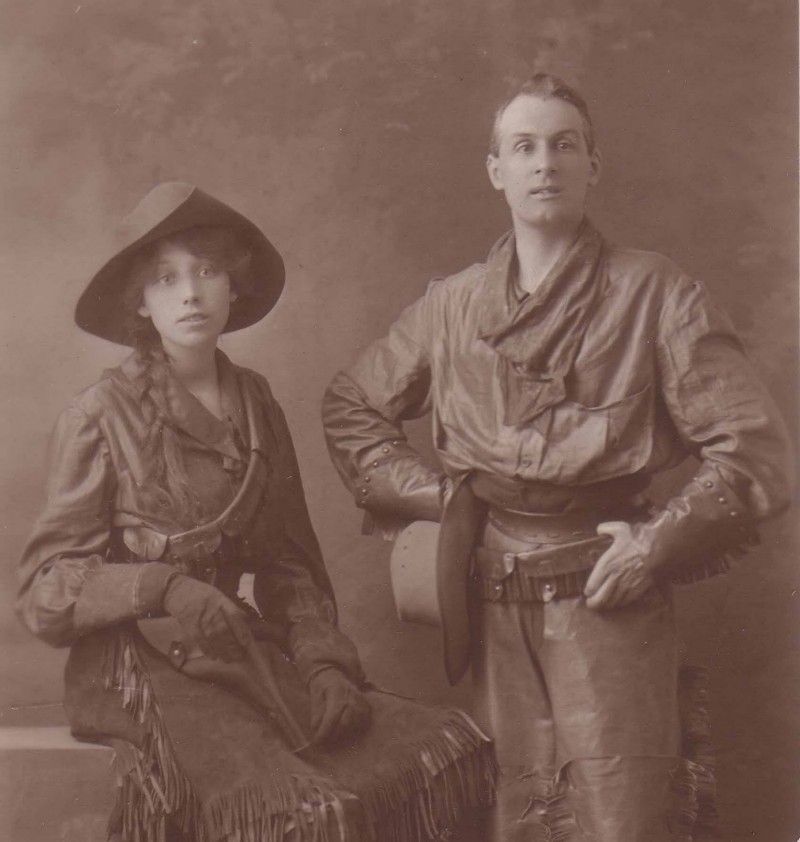 This Wild West picture was turned into a postcard. On the back, it mentions a photographic studio in Clapham. As usual there are few names, dates or places in the actual album (I never discovered the name of the woman), but I found one reference to a street in Raynes Park. By a strange coincidence, their family home was in the same road as my father-in-law’s house. 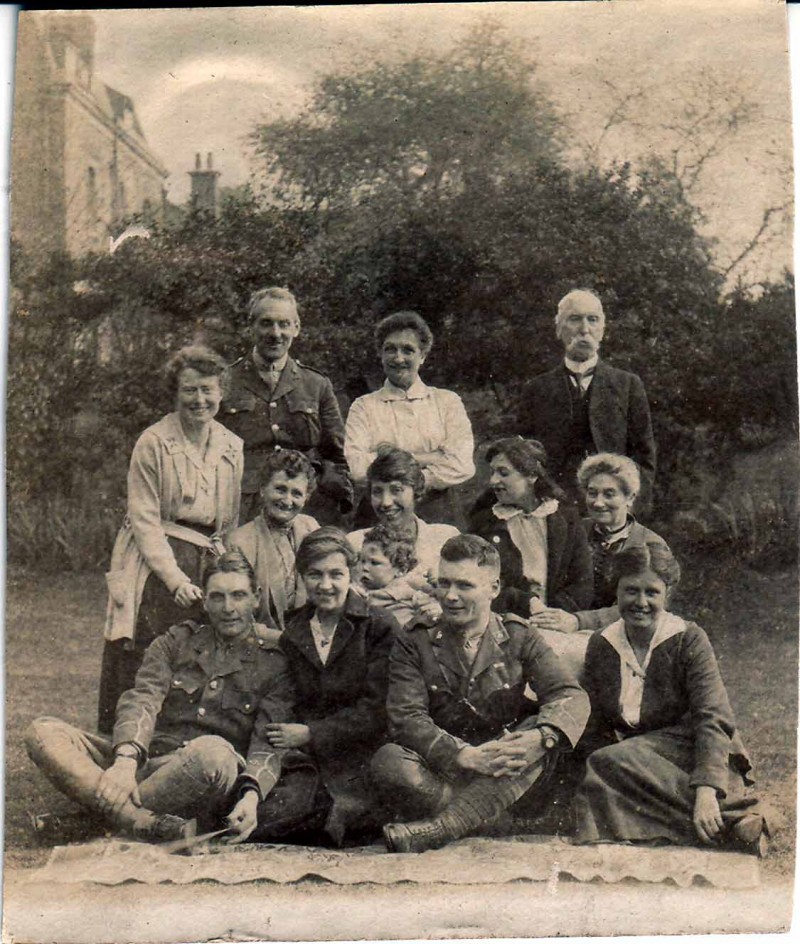 This photo reveals the gulf between the older and younger generations. I wonder, which of these men returned from the Front? 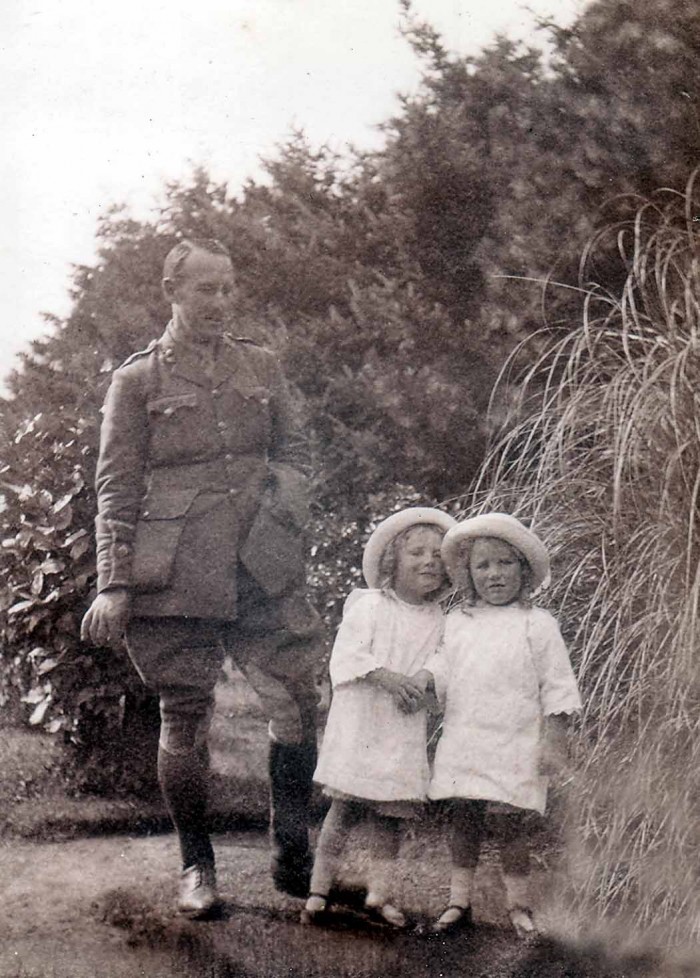 This man is named in the album as Harold Duncan-Teape. A quick Google search reveals that he was a major in the 4th battalion of the London Regiment of the Royal Fusiliers during the First World War. According to another reference, from the Illustrated London News, Duncan Teape died in Croydon on October 23rd, 1929. 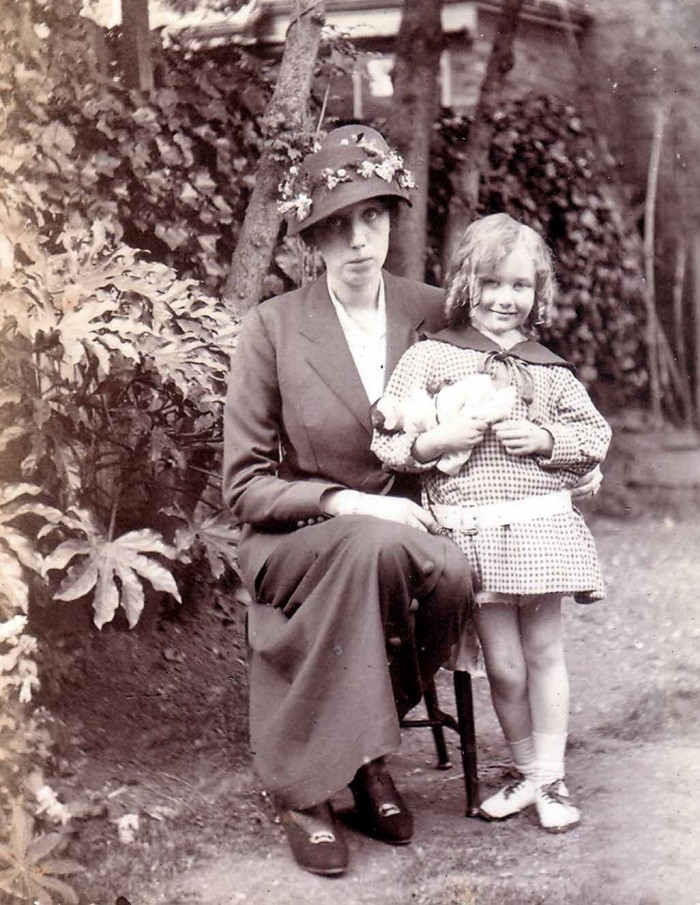 The fashions are clearly different in this photo – less florid and more practical, striking a stark contrast with the clothes of the previous decade. 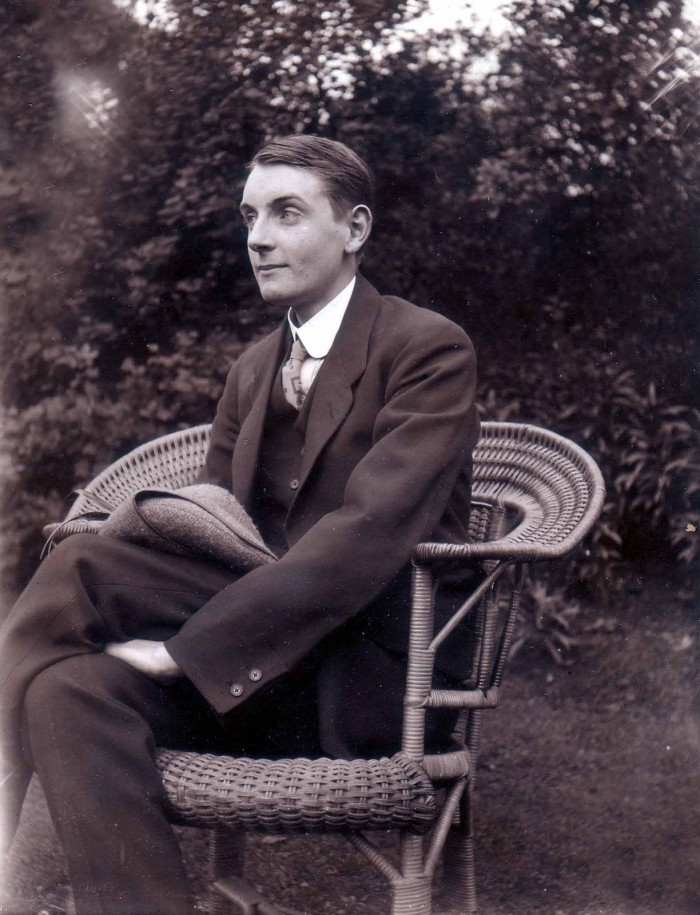 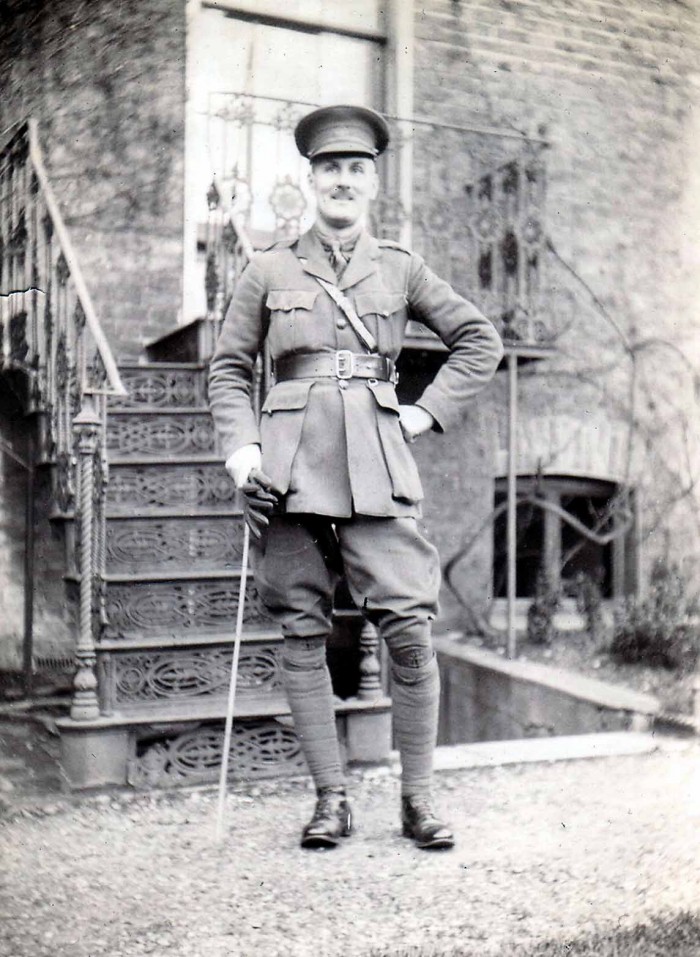 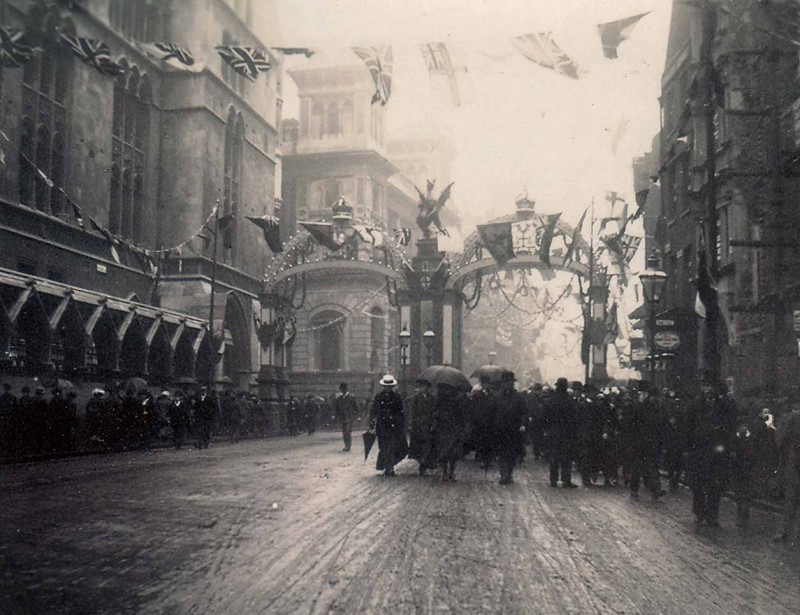 I have no idea what this occasion is – the first Rembrance Day, perhaps? 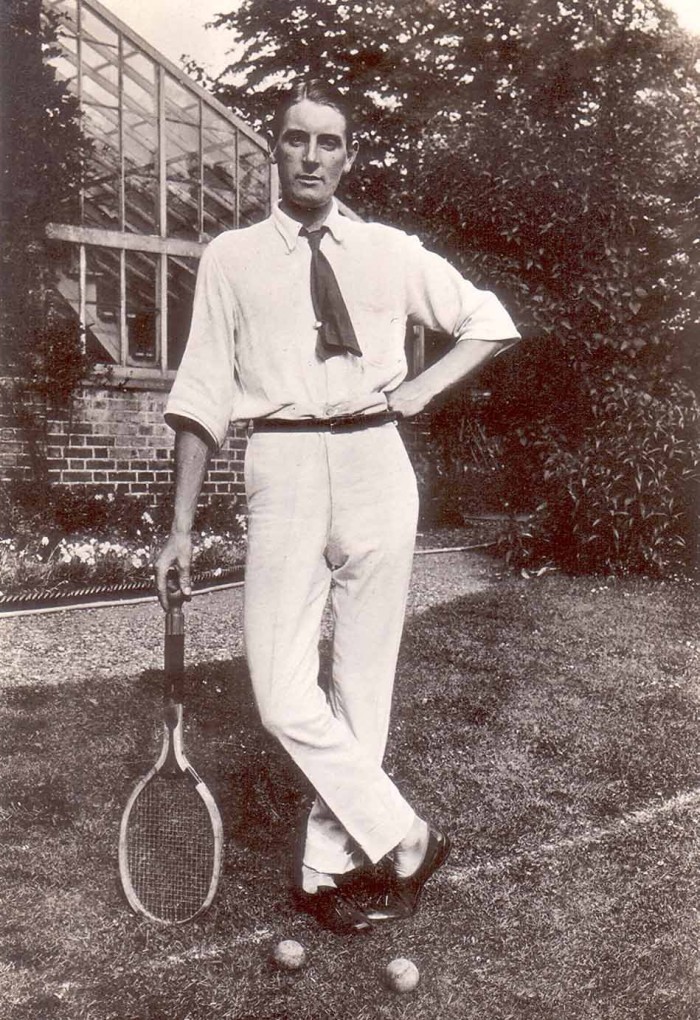 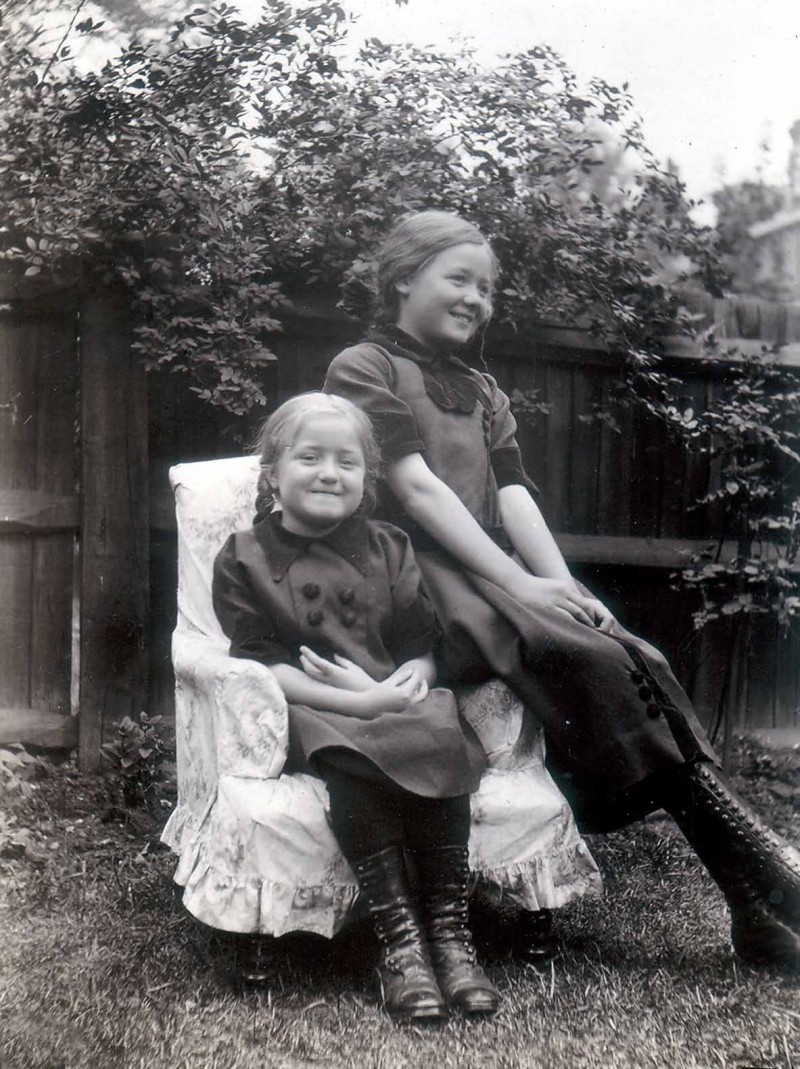 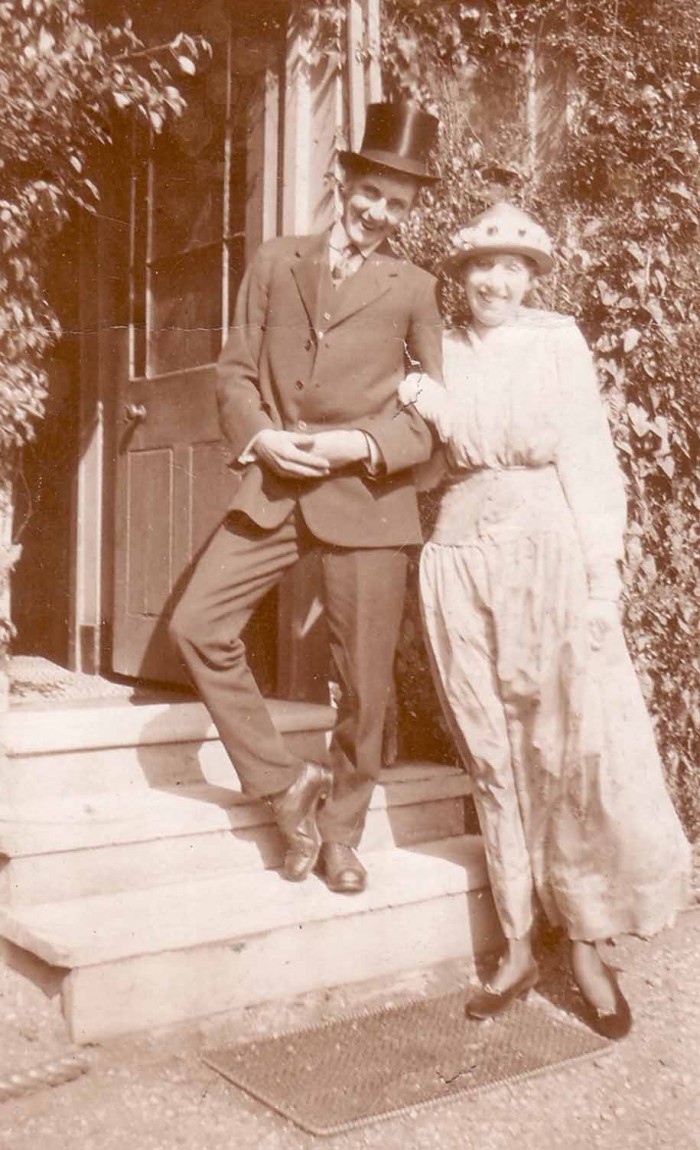 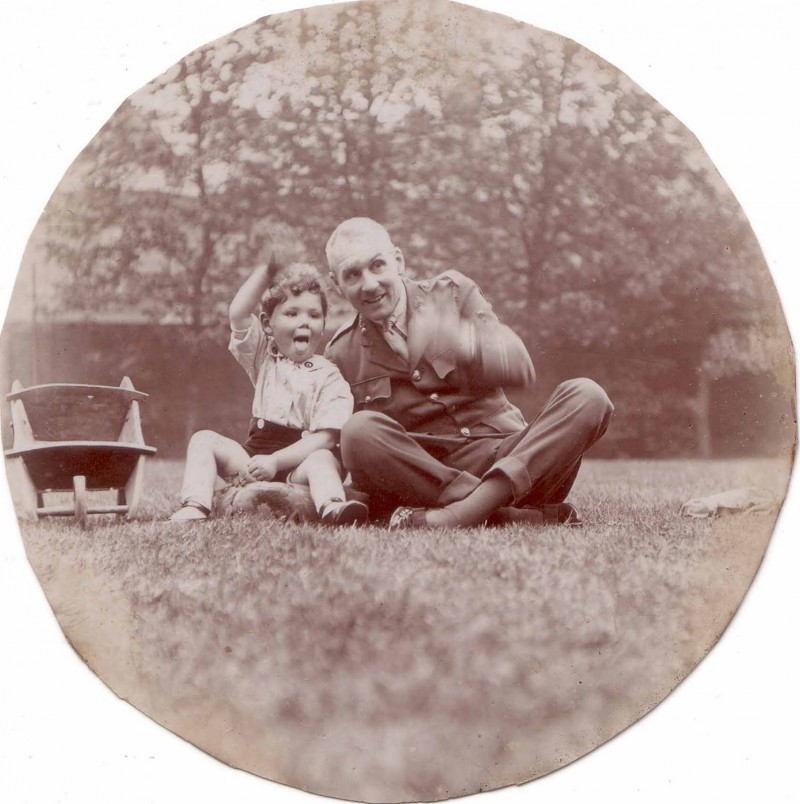 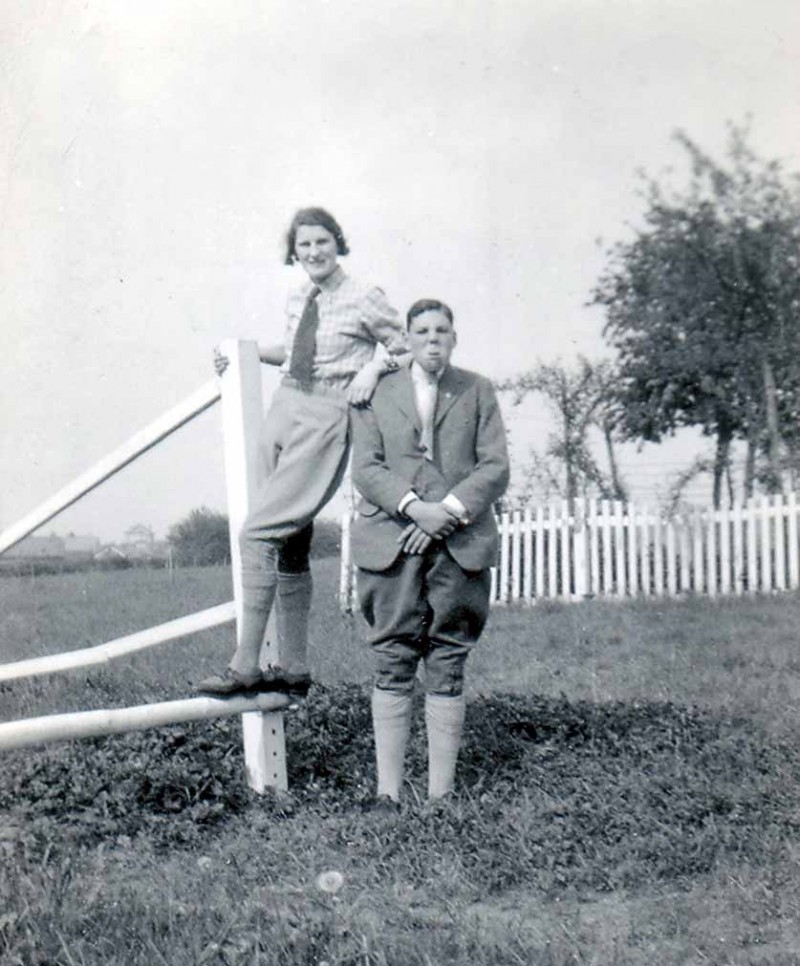 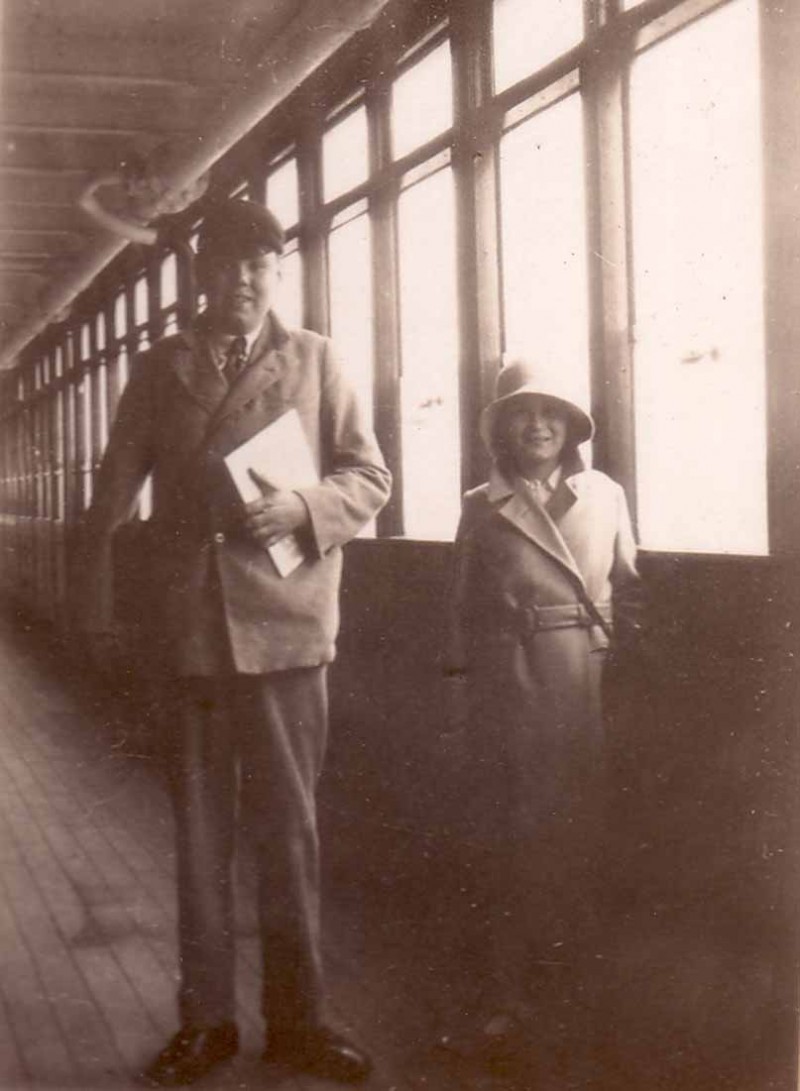 Here’s Ian again, enjoying the nautical life. It looks like a cruise ship, but I suppose it could be Bournemouth Pier. 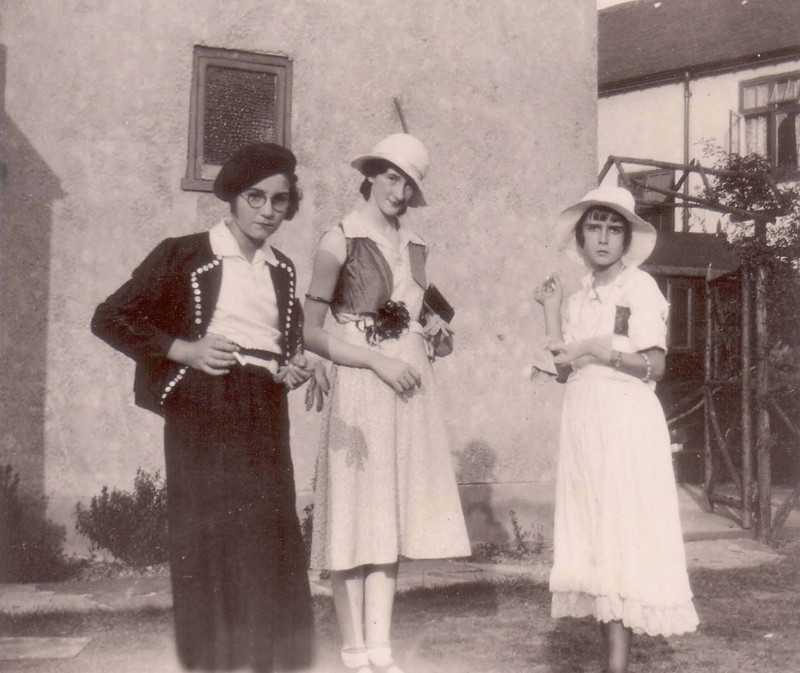 We like to complain about the sexualisation of children these days, pressurised by the media into growing up too soon, but what about these girls, forced to dress up as ‘flappers’? I’m sure they’d rather be riding ponies and solving mysteries. 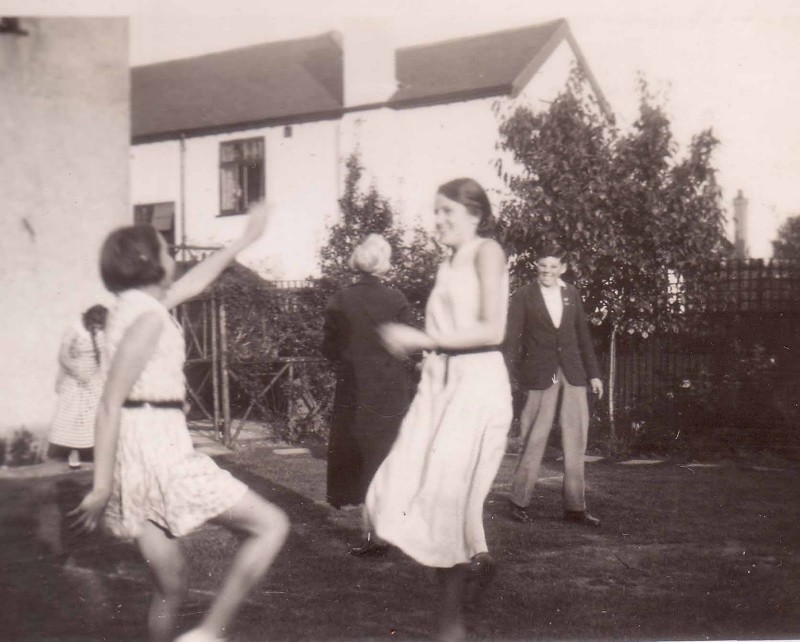 By now, the stuffy world of the Edwardians has vanished and no-one stands still long enough to remain in focus. And isn’t that Ian in the background, enjoying it all?

I don’t want to over-egg the ‘World War One as an agent of social change’ pudding – Marinetti’s Futurist Manifesto was published in 1909 and the evidence suggests that the First World War was a sympton rather than the cause. But if the status quo had remained, would Western society have undergone the huge seismic shift that took place in the 1920s?

The album ends in the late 1940s. The woman with the beautiful eyes lost her looks and became overweight, Uncle Jim disappeared into the ether and the group photographs suggest that the Victorians were no longer around either. But there are lots of photos of children playing and laughing, breathing new life into the sleepy suburb of SW20.