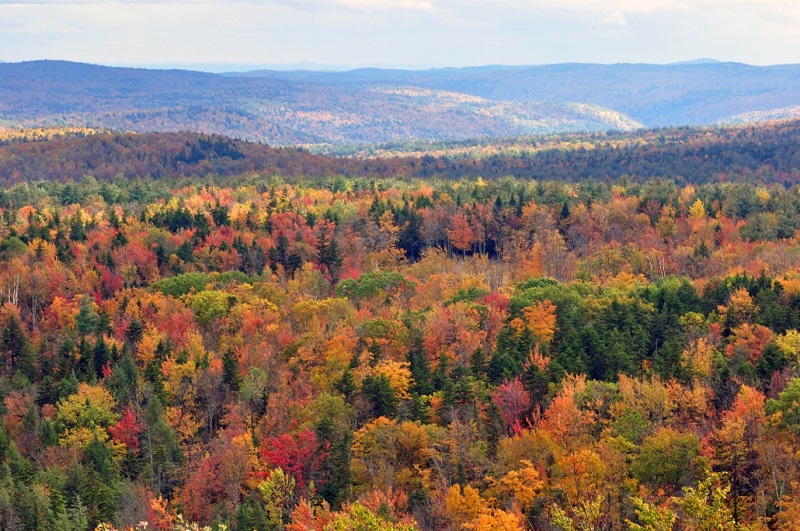 Our ex-pat American correspondent Rita is lucky enough to live in Maryland, home of one of the most beautiful Falls in the world. But can you ever escape modern life, even when Leaf Peeping?…

September is over, and as the days dwindle down to a precious few, an annual American ritual reaches its peak: the Invasion of the Leaf Peepers, autumn foliage enthusiasts who clog highways and byways from Vermont to Virginia. In their thousands they descend upon the most scenic areas of the countryside to view and photograph the glorious fall colors. Locals brace themselves for the invasion, eager for a share of the extra dollars peepers bring to the small town economy, yet dreading the traffic jams on usually empty country roads. The peepers are rewarded with a glimpse of a picture-postcard-perfect America, a landscape existing in a rare confluence of the real and the ideal.

But no national treasure is safe from the grip of the “tourism industrial complex.” Leaf Peeping, once a casual individual sport, is now a full-fledged, relentlessly marketed business. Chambers of Commerce promote their B&Bs, their scenic drives, their fall festivals, and their gift shops. Bus tours and even cruises up the New England coastline boast a leafy theme. Online the Foliage Network collates data from an army of foliage spotters onto maps color-coded for up to the minute peak peeping areas. Strategically placed webcams allow virtual peeping from the comfort of one’s own home. Travellers are warned of hazards from “moose crossings” in Maine to mesmerized drivers stopping their vehicles on the winding Blue Ridge Parkway. Arguments break out on peeper blogs over rival claimants to the Best Foliage crown. Yet heedless of human activity, the trees paint their annual palette of brilliant colors from maroon and flaming red to burnt orange and gold. The timing is a secret between them and the gods of weather. Humans can just look on and marvel.

I’ve driven the Blue Ridge Parkway in Virginia with its stunning views over the Roanoke Valley. It is surely a worthy contender for the claim to be “America’s favorite drive.” But my most memorable leaf peeping adventure was a fall driving tour of Maine. We stayed in charming B&Bs from Portland to Camden to Bar Harbor. We hiked in Acadia National Park and climbed mountains offering bird’s eye views over autumn glory. It was a welcome escape from the cares of the world for this was in October 2001. Planes had just begun flying again after the terrorist attacks of 9/11.

We flew into Portland, Maine, via Boston, the two airports the hijackers used that morning. For the next seven days we were free from the high anxiety of the times, escaping into the healing beauty of nature. The return journey was a jolting landing into the new reality of the post 9/11 world. Boston’s Logan airport was patrolled by machine gun toting National Guard. It felt like being in a war zone, which perhaps it was. Waiting in the crowd at our gate was a young man of Middle Eastern appearance. Soon he was surrounded by National Guard and police officers who led him away. After some time they escorted him back to the gate. He shook hands with one of the officers and I heard him say, “I understand.” Presumably the interrogation had turned up no reason to suspect him of terrorism. But the suspicion of the onlookers was palpable; they cast covert glances and seemed to leave a space around him. I was not immune to the reaction. After all, the hijackers of 9/11 looked like ordinary young men. Well groomed and conservatively dressed they were nothing like the robed, heavily bearded terrorists of the prevailing stereotype.

So yes, I was nervous about getting on a plane with this man and even more so when I found I was seated next to him. He was in the window seat so my husband and I were the first line of defense should he have nefarious intentions. Much had been made of the brave actions of the passengers on the hijacked plane that crashed into a Pennsylvania field. I found myself strategizing what I would do if he tried to leave his seat after the plane took off. The only thing I had that could be used as a weapon was a pen. I thought I could use it to stab him in the eye, gaining a precious few seconds for some big strong man among the passengers to subdue him. I got out the pen and pretended to be using it to mark passages in my magazine. My suspicious thoughts and planning felt so loud I was sure he could hear them. And I could hear his thoughts, an awareness that everyone on the plane was afraid of him. Out of the corner of my eye I saw he was reading a medical textbook. The plane was bound for Baltimore, so I deduced he was probably a medical student at Johns Hopkins. I relaxed my vigilance just a bit. When we landed I lost my balance and stumbled when I stood up. He reached out and steadied me. “Careful,” he said with a polite smile. I mumbled a thank you and felt myself blushing with shame for my suspicion. The complications of this new world were obliterating the serene mood of my leaf peeping vacation.

Who wouldn’t want to escape today’s reality, relentlessly assaulting us from TV screens and panicked alerts on our mobile devices? The reality of Ebola, wildfires, endless wars, beheadings, shootings, missing girls, and children paralyzed by a mystery illness. Even our President isn’t safe. I want to run away and join the Leaf Peepers.

5 thoughts on “Invasion of the Leaf Peepers”