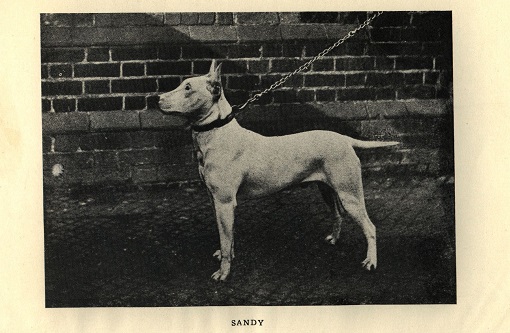 ‘Story Of My Life: The Trials and Triumphs of Sandy the Scrapper’ was a tale penned for children by Edith Monro Armstrong in 1914, and revised again for publication in 1949. It gives a dog’s eye view of Edwardian Canada. Bill Atkinson, who is working on a new edition of the book, provides this supernatural episode (and commentary)…

One day our neighbor, Mrs. Baxter, telephoned Mistress to say she wanted to bring Mrs. Worthy over if she were going to be home. It seems Mrs. Worthy was anxious to give her a demonstration as to what mental vibrations meant to the human body. They arrived a few minutes later. Mrs. Worthy immediately stretched herself full length on the library floor. She weighed about two hundred and thirty pounds and was about five feet eight in height. Imagine the spectacle she made! Her much too prominent stomach and excessive avoirdupois stretched full length upon her back covered a large portion of the rug. The soles of her number nine shoes faced Mrs. Baxter and Mistress seated on the chesterfield. Mrs. Worthy remarked, “You may use any poem you wish but for an example I prefer the Lord’s Prayer. Ladies, I don’t consider this sacrilegious.”

According to William Atkinson (no relation) writing in 1906, “ …the universe can be affected and changed just by your attention, the vibration of the thoughts that you are thinking may affect the very substance of the universe.” Googling ‘Mental vibrations’ will bring up 4,800,00 results as relevant now as they were in Sandy’s short vivid life.

I lay quietly in front of the fireplace. My head was cocked sideways. I was enjoying the “Periodical Scenery” in life -size technicolor. To me it was bewitching. Then Mrs. Worthy began her prayer while her stomach undulated with each vibrant thought, verbally expressed. This was too much for me and before I knew it she had me hypnotized. I promptly lay down at a right angle to her. Then I rested my two front paws on her slowly heaving stomach and reverently bowed my head. Closing my eyes, I sighed deeply and audibly, then remained absolutely silent. This was too much for Mistress’ sense of humour. She burst forth into peals of laughter in which Mrs. Baxter heartily joined. Then Mrs. Worthy, looking hurt and disgusted, arose and said, “Ladies, it is no use: that dog would kill any vibrations.” Amid their smothered laughter she bid them a haughty adieu. When she was out of hearing, Mistress, still laughing, stooped and patted me. She said, “Good old Sandy”, instead of the scolding I expected for breaking up their morning seance

Technicolor was invented in 1916 and not in use until the Twenties. No version of this episode appears in the 1914 edition of ‘Sandy the Scrapper’, presumably because Mrs. Worthy did not join the Choir Celestial until much later.

Mrs. Baxter came in one morning to see Mistress. I was apparently asleep in front of the fireplace. In the course of conversation Mistress happened to say that I knew everything she said. Mrs. Baxter laughed in a derisive sort of way. Mistress said, “I’ll prove it to you. He has not been up on my l-a-p since he was three months old. He is now nearly three years old and is such a large and powerful animal.” Then carrying on in the same conversational tone she said, “Is there a dog in this house would like to sit on my lap?” I called her bluff immediately. She was quite startled with the alacrity with which I bounded up in her lap. Mrs. Baxter could only remark, “Well, I Never!”

Our neighbors’ Bull Terrier, Sophie, will climb onto my wife’s lap at any opportunity. I once saw her launch herself like a tan torpedo, rip away the overall sleeve and puncture the arm of our Smart Hydro Meter installer and send it off with a fit of the collywobbles. In Sandy’s day laudanum (which makes an appearance earlier in the story) would have been prescribed. (Laudanum is hard to find in the age of Big Pharma but a friend who has a poppy field and a distilling apparatus makes his own, which he says soothes the troubled mind.)

Edith Armstrong was the second wife of Bill Atkinson’s grandfather. Bill is currently working on a new edition of the original Sandy the Scrapper.

One thought on “Sandy the Scrapper attends a Seance”