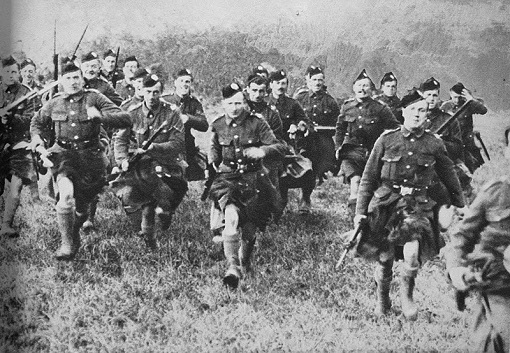 Marking both last week’s referendum result and the centenary of the Great War, here Gaw presents a poem about the war effort of the London Scottish rugby club…

It’s always the fellowship that seems most important to soldiers; ultimately, it’s what persuades them to die. Doesn’t that fit the definition of a tragedy?

This poem by the late Mick Imlah describes the fate of the players of the London Scottish rugby club in the First World War (some background here).

April, the last full fixture of the spring:
‘Feet, Scottish, feet’ – they rucked the fear of God
Into Blackheath. Their club was everything:
And of the four sides playing that afternoon,
The stars, but also those from the back pitches,
All sixty volunteered for the touring squad,
And swapped their Richmond turf for Belgian ditches.
October: mad for a fight, they broke too soon
On the Ypres Salient, rushing the ridge between
‘Witshit’ and Messines.        Three-quarters died.

Of that ill-balanced and fatigued fifteen
The ass selectors favoured to survive,
Just one, Brodie the prop, resumed his post.
The others sometimes drank to ‘The Forty-Five’:
Neither a humorous nor an idle toast.