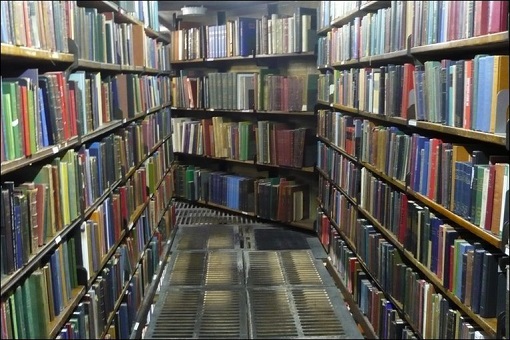 Frank considers that eternal question: how should one arrange one’s books?…

The other day I decided to rearrange my bookshelves. Their current state is, to put it mildly, chaotic. I seem to recall there being a system of sorts, some years ago, but latterly the apposite word to describe the disposition of my books would be higgledy-piggledy (unless that is two words). So I did the sensible thing in the circumstances, which was to fossick around until I found The Book On The Bookshelf by Henry Petroski. Then I sat down and turned to the Appendix, where the author suggests twenty different ways of arranging one’s books:

By author’s last name; By title; By subject; By size; Horizontally; By colour; By hardbacks and paperbacks; By publisher; By read/unread books; By strict order of acquisition; By order of publication; According to the Dewey Decimal System; According to the Library of Congress System; By ISBN; By price; According to new and used; By enjoyment; By sentimental value; By provenance.

There is a short essay attached to each of these headings, and they are followed by a twenty-first essay entitled By still more esoteric arrangements. One such is the system of shelfmarks used by the London Library. Whenever anybody writes about this, the word idiosyncratic appears early on, and is followed by a panegyric on the subdivisions of the Science & Miscellaneous category. If a book does not slip neatly into one of the main groups (Literature, History, Biography, Topography, etc), off to Science & Miscellaneous it goes. Here we find such pleasing juxtapositions as S. Laughter, S. Law, S. Lawn Tennis, and S. Leather. There is a full list of London Library shelfmarks online here (pdf), which I commend to all Dabblers for diligent study.

3 thoughts on “Books And Pencils”