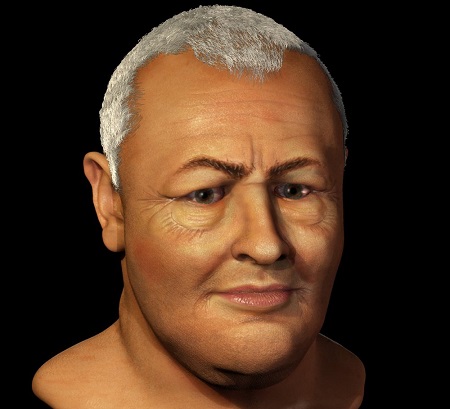 This week Mahlerman selects works by four composers who were direcly influenced by the greatest of them all, J S Bach…

Without the famous horsehair wig, and looking more like a Soho bouncer than perhaps the greatest composer who ever lived, we can better appreciate the personality of J S Bach, which was far removed from the earnest spirituality conveyed in the only extant ‘bewigged’ portrait we have of him – for alongside his well-known modesty and tolerance, sat a man who was never patient with incompetents and, if he felt that displays of effrontery got in the way of his work, would often attack the miscreant. On one occasion he tore off his wig and threw it at a musician, exclaiming ‘You should have been a cobbler!’.

It must have been obvious to anybody reading my post on J S Bach earlier this year that, perhaps more than any other composer before or since, his music lends itself to performance by almost any instrument, in almost any context – and furthermore it can be adapted, re-arranged, transcribed and even reversed, at a whim.  Instead of listing the composers of Bach’s time and after who have acknowledged his genius, better to ask who has not, at some point, fallen under the spell of this great Lutheran? Almost nobody I would suggest – including JSB himself who, if pressed for time, ‘borrowed’ from the Italians or, on occasion, borrowed from himself. Today, leaving aside Stokowski’s rather heavy-handed efforts for Walt Disney, we look at some less-obvious modern masters who purloined perhaps just the essence, the pith of a theme, and set forth to make something of their own.

Although the Quartet No 1 (From the Salvation Army) by Charles Ives dates from the last years of the 19th Century when the composer was a student at Yale, it is impossible to think of this American pioneer as anything other than a modern master – and one of the great ‘borrowers’ of his time. The Salvation Army, hymn tunes, traditional and patriotic songs, fiddlers at Saturday night dances, a town band at a holiday parade – all these and more were assimilated and processed by his extraordinary imagination, emerging often barely recognizable.  The Toccata & Fugue in D minor, BWV 538 has been a popular source material for many composers, and here (and in the 3rd movement of his 4th Symphony) Ives uses just a tincture of the theme to stimulate a dozen marvellous ideas.

Although I happily put Stokowski aside because his ‘dead hand’ seems to smother the life out of Bach, Ottorino Respighi runs him pretty close in this amazingly ‘over the top’ realisation of the Prelude & Fugue in D major BWV 532, dating from 1929.  Fifty years ago just the mention of Respighi’s name would bring forth a smile or a snort from so-called music connoisseurs ( ‘a sorry cocktail of Wagnerian muscle and unmelodious Puccini’ ) but his rehabilitation is well under way, and he is now rightly recognised as both a scholar of genius, and an unsurpassed orchestrator. The wonderful painting of the Grote Markt in Haarlem by Gerrit Berckheyde was fashioned in 1669.

Although he can be numbered as one of the key figures of the Second Viennese School, any number of music-lovers and musicians of my acquaintance cannot listen to the music of Anton Webern without experiencing some kind of discomfort. His concise and highly individual atonal and serial compositions are seen as simply too astringent for pleasurable listening and, amusingly, I have heard more than once that composers who produce ‘difficult’ or intellectual music ‘should be shot’. Regular readers of this column will know that Webern, tragically, was indeed shot, mistakenly, just after the end of the war by an American soldier, as he enjoyed a last cigar while visiting his daughter near Salzburg. The soldier, unable to cope with his ‘error’, turned to drink and later committed suicide, doubling-up the calamity.

The Musical Offering is a collection of canons and fugues based upon a notable ‘theme’ given to Bach by Frederick II of Prussia. Many have felt that Webern’s ‘version’ of the Ricercar Fugue drains the music of its vital energy in an attempt to shoehorn it into a 20th Century mould. All I can say is that I don’t share that lack of enthusiasm for what emerged in 1935.

The most prominent members of the so-called Second Viennese School alongside Webern were Alban Berg and the great Austrian revolutionary Arnold Schoenberg who, in the early 1920’s, began work on what became his notorious Twelve Tone System of musical notation – but he didn’t completely abandon Free Tonality or indeed the Romanticism of his early student days, and in 1922 he produced two exquisite orchestrations of Bach’s Chorale preludes BWV 631 and BWV 654, the serenely beautiful Schmucke dich, o liebe Seele. Robert Schumann, who knew a thing or two about pulchritude, called the Bach original a composition ‘of unmatched beauty’, and this modern reworking of the score, including a beautiful ‘cello obligato amidst the lush orchestral backdrop surely reinforces those sentiments.

2 thoughts on “After Bach”