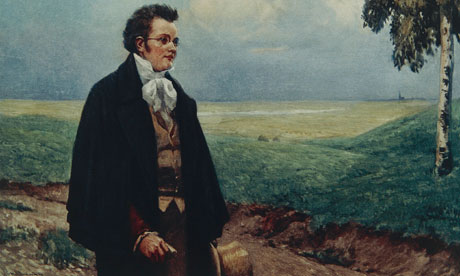 Emerging, as I did the other day, from the subterranean depths of the tube into the bright sunlight of Tooting Broadway I was greeted by the familiar beauty of Franz Schubert’s imperishable masterpiece, Deutsch number 759, the Symphony No 8 in B minor known as ‘Unfinished’ – and with a little time to spare before my appointment, I thought I would try to find out why that unloved organisation Transport for London would create such incongruity, even for a fleeting moment, and why Schubert? Was there a station manager who had ‘always loved the classics’, and this was his way of letting us know? If only life were as romantic as that. Behind all this, is that familiar phrase ‘antisocial behaviour’.

It seems that Tooting Broadway is not an exception, more a rule (almost), as ‘serious music’ is now to be heard across London in dozens of stations (I must get out more) in ‘troubled’ areas. What we are talking about here is ‘yob clearance’. The bad-boys and street-gangs don’t care for Franz or Ludwig, as these ‘guys in wigs’ don’t chime with their elevated ideas of their own importance, their own ‘cool’ – and they simply move along. The station manager told me that since the piping of ‘classical music’ began several years ago, there had been a sharp drop in robberies, assaults and even vandalism. What would young Franz (he was always young) have thought about it? Or Plato, writing circa 300 BC that ‘Music is a moral law, it gives soul to the universe, wings to the mind, flight to the imagination, and charm and gaiety to life and to everything’.

Pondering Schubert, as I wandered towards the ‘city within a city’ that is St George’s Hospital, I convinced myself again that the two movements that make up the perfection of this wonderful creation are not ‘unfinished’ at all. He didn’t conk out after composing them, he set them aside to write something else. Music poured out of him in such a torrent that, at times, the administrative side of his life suffered.

Most composers, in fact, really do ‘conk-out’ during the creative process, and Pyotr Ilyich Tchaikovsky would be numbered among them. He wrote once that ‘I cannot live without working’, and although his rarely played Symphony in E flat is numbered as his 7th, it was part-composed after the Fifth and followed, of course, by the ‘Pathetique’ Sixth. It is something of a curate’s egg, routine for the most part, containing no great Tchaikovskian melodies but, like everything this great Russian did, beautifully finished. The third movement is a fleet, diaphanous Scherzo of no particular merit, but the second movement Andante is a serene and idiomatic beauty that could have been lifted from any of the great ballets.

By 1909 the heart disease that had plagued Gustav Mahler for several years, made it at first difficult, and later impossible, for him to finish the five movement work that would eventually ( with help from friends and, later, musicologists ) become his Symphony No 10 in F sharp minor. Almost everything about this remarkable piece is unusual, not least the form – two huge Adagio outer movements each running toward 25 minutes, enclosing two Scherzos of about 12 minutes each, with a central, spooky purgatorio movement at less than five minutes. The manuscript copy tells us that only the first movement Adagio and the third movement ‘Purgatorio’ were in any way ‘finished’ in Mahler’s hand, the rest was a jumble of half-finished thoughts and ideas, but with enough ‘shape’ for the detective work to begin – which it did, shortly after the composer’s death in 1911 when Mahler’s one-time son-in-law Ernst Krenek collaborated with composer Alban Berg to ‘tidy up’ the almost finished Adagio.

These days, amongst a crowded field, it is the completed version of the five movements made over fifty years ago by the late Mahler scholar Deryck Cooke that holds sway, and convinces me that this staggering work is perhaps the composer’s greatest achievement, notwithstanding the ‘input’ of others. All the factors that Mahler lovers look for and expect are here in this deeply personal piece – death, redemption, salvation and, perhaps, a farewell to life and to his beloved Alma, who had already, as he knew, transferred her favours to another.

Here, the start of the last great Adagio explodes into life with several bass-drum whipcracks. A hint of melody is taken-up by the horns to flower (at 2.10) into one of Mahler’s most haunting and beautiful creations, a meandering flute solo that, without repetition, unfolds an 80 second melody that stunned me when I first heard it, and still does.

It has been said that Mahler spent a lifetime looking for God, but the Austrian Anton Bruckner found Him, and in fact dedicated his last utterance, the Symphony No 9 in D minor to ‘dem lien Gott’. Cast in four movements, the composer’s death in 1896 left the last movement in fragments, and today the two giant slow movements straddling a scherzo are the usual performing versions. Like a handful of other works I have mentioned in these posts ( Mahler 9, say ), I have seen listeners drifting toward to exits with tears streaming down their cheeks after hearing both the monumental architecture of this piece, and the deeply felt expression of the composer’s love for his God, an effort he put into almost everything he wrote. This recording is quite a long way removed from what was once known as ‘high-fidelity’. Nor is the playing as good as we have come to expect from the modern-day Berliner Philarmoniker. But standing on the rostrum in front of them almost exactly 70 years ago was a Berliner that became a legend in his own lifetime, and something of a musical deity in the years that followed his death in 1954, ten years after this recording was made.

His name was Wilhelm Furtwangler. His ‘stick technique’ was, at best, hazardous. The printed score he treated as a ‘guide’ – he had no interest in exactitude. He was tall and bean-pole thin, and often seemed to be in a trance when conducting. But…..he was a magician as well as a musician, a man who had the ability (like Carlos Kleiber who came after him) to create ‘ignition’ and, to quote conductor/pianist Christoph Eschenbach, he was ‘capable of setting an entire ensemble of musicians on fire, sending them into a state of ecstasy’.