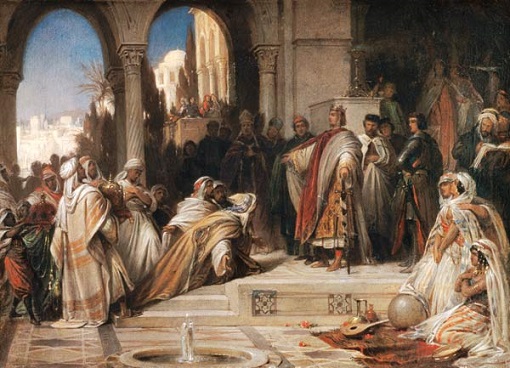 This week, a guide to manners when finding oneself amongst royalty and/or pigs…

We all know that good manners cost nothing, and that civility makes the world bearable. Here, then, are some useful extracts from my forthcoming Book Of Etiquette:

Correct Form Of Address When Ushered Into The Presence Of Prince Fulgencio.

Oh glorious and magnificent Prince! Shaft of sunlight! Absolutely fantastic and gorgeous royal being! Allow me to fling myself into the mud and sprawl there at your feet, clad as always in such elegant bootees!

[So saying, the supplicant should fling himself into the mud and sprawl at the feet of Prince Fulgencio, clad as always in elegant bootees.]

Correct Form Of Address To One Of Prince Fulgencio’s Henchmen.

Eek! Please do not run me through with that rapier nor hack at me with that blood-drenched axe!

Correct Form Of Address To One Of Prince Fulgencio’s Weedy Minions.

Hello! How do I join your ranks?

When Dining At Table With Prince Fulgencio.

The butler, Grimes, will provide you with a plastic spoon with which to sup the slops graciously provided to you by the Prince in return for a cash payment. On no account should you make use of the spoon – to do so would be the most grievous faux pas imaginable, and you would be taken out and shot. Nor should you pick up the bowl and slurp from it directly. Instead, try as best you can to transfer the runny slops from bowl to mouth with your bare hands. You will present a disgusting spectacle and spill much more than you manage to digest, thus confirming Prince Fulgencio’s belief that you are a brutish peasant.

When Faced With A Pig.

Stare at the pig with a thin smile playing about your lips. Twirl your moustachios.

When Locked In The Sty With The Pigs By One Of Prince Fulgencio’s Henchmen.

See above. You will have achieved a rapport with the pigs and may wallow in the filth undisturbed.

Correct Form Of Address When Writing A Formal Letter To Prince Fulgencio.

Oh glorious and magnificent Prince! Shaft of sunlight! Absolutely fantastic and gorgeous royal being! I cannot thank you enough for allowing me to feed disgustingly on slops at your lovely wooden banqueting table. So boundless is my gratitude that I wish only to pay grovelling obeisance to you for the rest of my solitary, poor, nasty, brutish, and short life. In order that I might better achieve this humble goal, I wonder if perhaps you might bestow upon me the honour of being released from my confinement among the pigs in the pig sty? Of course I realise that such a request is quite without merit and if your response is to have certain of your henchmen come and beat me senseless with clubs and bludgeons that will be reward enough for my insolence.

Hello chaps! You know what? I have never been happier! Prince Fulgencio is an absolute brick, the most marvellous and wonderful and indeed faultless benefactor, philanthropist and saint ever to have trod the earth. I can see from the expressions of wide-eyed incredulity gouged upon your faces that you think my claims dubious, and that this is some kind of Potemkin pig sty. Good grief! If there were any justice in this world the Prince would be paid a visit by animal and peasant health and welfare inspectors who were not bleeding-heart do-gooders but useful idiots! Come, pigs, attack! Attack!

Correct Form Of Words When Pinning A Medal Of Valour To A Pig.

Protocol For Soothing A Squealing Pig Unhinged By A Pin-Prick.

Pat the pig on the head with one hand, while applying Oriental liniment, unguent and goo with the other. Dab with cotton wool. Cover with disinfectant sticking plaster. Book a series of appointments for pig at mobile travelling-van post-pin-prick pig clinic.

Correct Form Of Words In Any Situation Having Dwelt In A Pig Sty For Several Months.

When Dragged From The Pig Sty And Offered By Prince Fulgencio As A Sacrificial Victim To Appease The Hideous Bat God Fatso.

Offer thanks to Prince Fulgencio by transferring to his ownership all your worldly goods, even if they are mere paltries such as potatoes, turnips, broken farm implements and a dilapidated hovel. Skip happily from the pig sty across the wasteland, pitted with puddles and rife with stinging nettles, to the great stone slab upon which the sacrifice will take place. Weep with fervent joy at the spectacle of Prince Fulgencio, his henchmen, and his weedy minions, all lined up and laughing their heads off as a wizard summons the hideous bat god Fatso with incantations and gibberish and strangely significant arm-movements. Shut your eyes and clap your hands over your ears when the hideous bat god Fatso appears in a cloud of thick stinking black smoke accompanied by a deafening din. Lie back on the stone slab in a relaxed posture, and with strangulated inarticulate cries plead and beg with the hideous bat god Fatso to tear out your hot throbbing heart and toss it into his great tin dustbin. Turn your head to face Prince Fulgencio and, with your last breath, blow him a smoochy kiss.