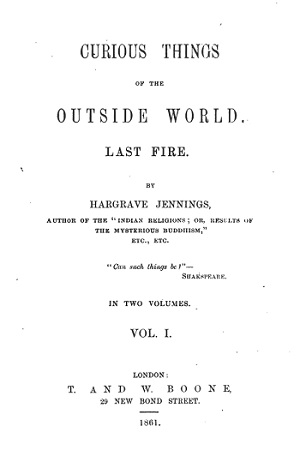 What everyone from Hippocrates to Shakespeare said about swoons, shudders, convulsions and dread…

Hargrave Jennings (c.1817-1890) was an English Rosicrucian, occultist, and writer on comparative religion, whose day job was acting as secretary to an opera manager called Colonel Mapleson. Among his works were Sermons From The Styx (1886), puportedly a “posthumous work by Frederivk the Great”, dictated to Jennings by the Emperor from beyond the grave, and a book with the unimproveable title Childishness And The Brutality Of The Time (1883). He also wrote a history of obelisks.

In Curious Things Of The Outside World : Last Fire (1861), Jennings gave us a potted history of swoons, shudders, convulsions, and dread:

Amatus Lusitanus relates the case of a monk who fainted when he beheld a rose, and never quitted his cell while that flower was blooming. Orfila (a less questionable authority) gives the account of the painter Vincent, who was seized with violent vertigo, and swooned, when there were roses in the room. Voltaire gives the history of an officer who was thrown into convulsions and lost his senses by having pinks in his chamber. Orfila also relates the instance of a lady, of forty-six years of age, of a hale constitution, who could never be present when a decoction of linseed was preparing, being troubled in the course of a few minutes with a general swelling of the face, followed by fainting and a loss of the intellectual faculties, which symptoms continued for four-and-twenty hours. Montaigne remarks on this subject, that there were men who dreaded an apple more than a cannon-ball. Zimmerman tells us of a lady who could not endure the feeling of silk and satin, and shuddered when she touched the velvety skin of a peach : other ladies cannot bear the feel of fur. Boyle records the case of a man who experienced a natural abhorrence of honey ; a young man invariably fainted when a servant swept his room. Hippocrates mentions one Nicanor, who swooned whenever he heard a flute ; and Shakespeare has alluded to the strange effect of the bagpipe. Boyle fell into a syncope when he heard the splashing of water ; Scaliger turned pale on the sight of water-cresses ; Erasmus experienced febrile symptoms when smelling fish ; the Duke d’Epernon swooned on beholding a leveret, although a hare did not produce the same effect ; Tycho Brahe fainted at the sight of a fox, Henry III of France at that of a cat, and Marshal D’Albret at a pig. The horror that whole families entertain of cheese is well known.

3 thoughts on “A Potted History of Swoons, Shudders, Convulsions, & Dread”