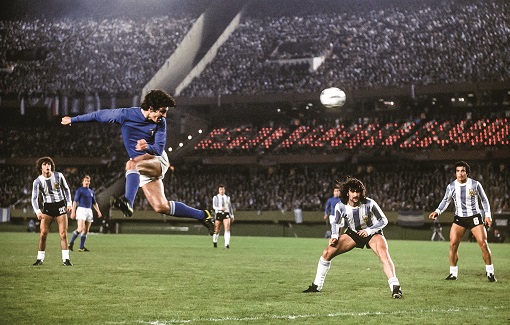 Paolo Rossi, the Italy striker, sends a spectacular header towards goal during a 1‒0 win over Argentina

Golden Age-ism ­‑­ the idea that in a particular era the stars shone brighter, the greats were greater and the men were real men instead of spoilt prima donnas or professional drones – is a common strand of thought in discussions of sporting history. And sometimes there’s a deal of truth in it. Today’s crop of Test cricket fast bowlers – worn down by endless money-spinning tours, flat pitches and tailend batsmen confident in their protective helmets – are pale imitations of Lillee, Thomson, Holding and the other terrifying 1970s speed demons. But often Golden Age-ism is just the nostalgic illusion of old men, and every generation thinks it lived it.

Another common strand, not always contradictory, is the patronising view that previous eras – because the people didn’t know what we know now – were innocent, quaint, faintly comical and essentially a practice for the real business of today. It doesn’t often occur to proponents of this view that future generations might likewise chuckle at our current mores. 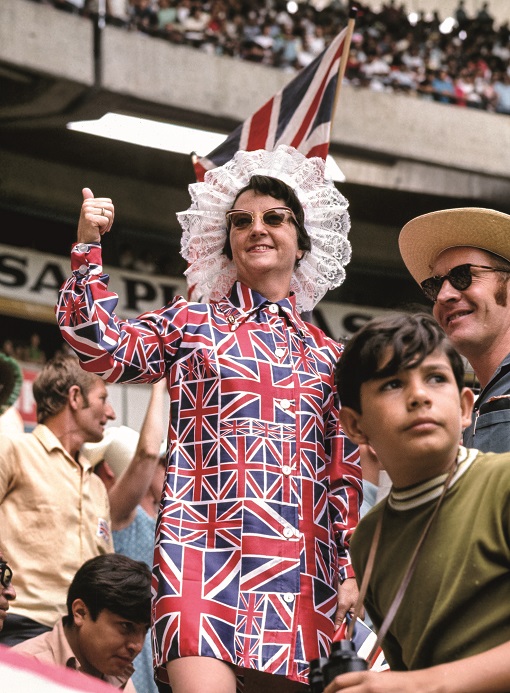 An England fan dressed in a Union Jack pattern dress looks on from the stands. (1970)

Whether your view of 1970s soccer is that it was a quaint run-up to the ‘modern game’ or a Golden Age from which we’ve declined, you can find confirmation of it in the stupendous new TASCHEN photographic book The Age of Innocence – Football in the 1970s. The editors hedge their bets and go for both, declining to put a question mark after ‘Innocence’ but also claiming that in the 70s

the game was at its most beautiful, free-flowing and entertaining. Football became truly international thanks to extraordinarily talented teams and charismatic players who became the first generation of football superstars, long before David Beckham stripped down to his underwear.

On the ‘innocent’ side are the toe-curling commercials and promo stuff. There seemed to be a particular craze for advertising new kits by photographing a star player in his normal civvies standing next to a dolly bird wearing the football strip. There is a gruesome one of Kenny Dalglish sitting at a table in an inexplicably grubby pub, grinning over a pint of mild and a soiled ashtray, while behind him a lass in a Scotland kit stretches provocatively across a couple of bar stools.

On the Golden Age side of the argument are the superstars. The Age of Innocence is a terrific record of a positive constellation of stars: some, like Johann Cruyff, at their peak; others just past it and milking the Major League Soccer cash (Pele, Moore, Best), and others yet to it reach it. There are some wonderful snaps of a fifteen-year old Diego Maradona packing to join his first professional club, and then a few years later sitting at the hairdresser getting his trademark perm. The photos of the stars are exceptionally good and often intimate (including Franz Beckenbauer and Gerd Muller sharing a double-bed, Morecambe and Wise-style; and, alarmingly, a full frontal of Pele in the showers). 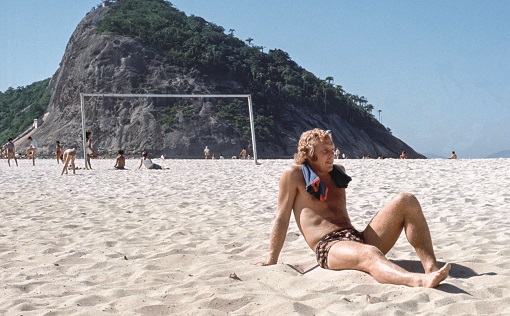 But was football really at its ‘most free-flowing and entertaining’ in the 70s, as Golden Age-ists claim? Watch archive footage now and the games seem laughably slow. World Cup matches are at walking pace with players facing almost no pressure on the ball outside the attacking third. English domestic games are played on atrocious muddy pitches with a heavy ball and defenders who simply attempted to kick talented attackers into the stands. They could also pass back to the goalkeeper. (Not enough is made, I feel, of the positive transformative effects on the game of the 1992 backpass rule. It forced goalies to become comfortable footballers – which has effectively eliminated the position of the sweeper – but also made it worthwhile for attackers to aggressively pressurise defenders on the ball, forcing defenders to become better footballers in turn. The days of the unskilled, brutal ‘donkey’ centre-back are over. It has also massively improved the game as a spectacle – people reminisce fondly about the great 1980s Liverpool sides, but once they went 1-0 up there was a hell of a lot of Lawrenson-to-Hanson-and-back-to-Grobbelaar-ing). To my mind football in 2014 has more exciting attacking play and much higher all-round skill levels (even goalkeepers can do Cruyff-turns these days).

On these pages James Hamilton has written convincingly that the idea of a 1970s Golden Age is largely a myth. He has also pointed out that football was a ‘finished project’ as a spectator sport as early as 1913, when “121,919 people could ride brand new electric trains and trams to the beautiful stadium at Crystal Palace, buy a glossy colour match souvenir and, surrounded by lakes and parkland, watch Sunderland and Aston Villa, the two richest sides in England” contest the FA Cup final.

But of course what they didn’t have in 1913 was glorious colour action photography. This is a tremendous, enormous, beautiful, endlessly fascinating collection of pictures by top-notch snappers including Neil Leifer, Peter Robinson, Gerry Cranha and Terry O’Neill book. The RRP is a thumping £34.99, but if you’re seeking the perfect gift for the soccer aficionado or 70s nostalgist in your life, this is it. 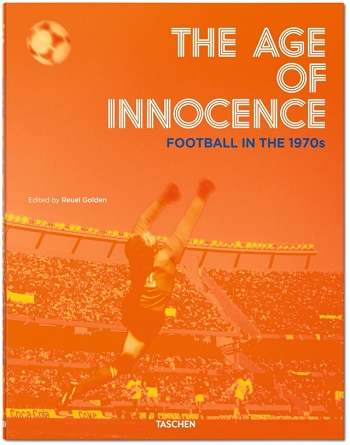 The Age of Innocence. Football in the 1970s (edited by Reuel Golden) is published by TASCHEN.