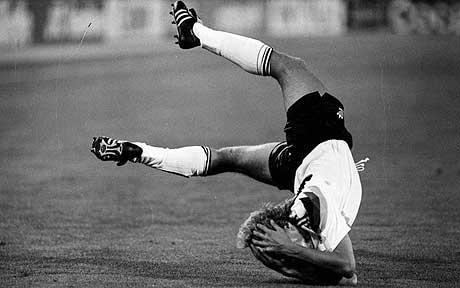 Next week sees the beginning of the 2014 World Cup foopball tournament, What this consists of, for the uninitiated, is a few weeks during which men in shorts run around grassy fields, huffing and puffing and occasionally falling over. The focus of their attention is a ball – the foopball – which is about the size of a pig’s head. There are various arcane rules governing their chasing around of the ball, but you do not really need to know them to enjoy the spectacle.

The grassy field is known as a pitch. It has several lines drawn on it with whitewash. These are applied by a chap known as the groundsman, but he is nowhere to be seen while the men are running around. At least, he is not readily identifiable. He may well be among the teeming thousands of spectators, but then again he is just as likely to be sat in his potting shed puffing on a rollup and smearing grease on to his whitewash-applicator, readying it for the next application of whitewash to the grass. He is, in a sense, the unsung hero of the tournament, for without his whitewash application skills, without the markings on the grass, the men running around in pursuit of the foopball would run around in a completely haphazard fashion. Some of them are already haphazard enough, but at least with the whitewashed lines they are given some idea of where they are.

In the potting shed, while smoking a gasper and greasing his whitewashing contraption, the groundsman will probably be listening to a transistor radio. He will have it tuned in to a station broadcasting what is called a “commentary” on the foopball match. This is where a man among the teeming thousands of spectators, in a special box, and armed with a microphone, babbles his observations of what is happening on the pitch. He will say things like: “Here we are in the field of dreams, surrounded by fields of cows” and “For a moment there, he looked like a baby gazelle who’d just plopped out of the womb”. Such aperçus can actually be more entertaining than the foopball game itself, long stretches of which are often pointless and enervating.

If you find your mind wandering and do not have a transistor radio, you can pass the time by counting the persons on the pitch. Generally speaking, there ought to be twenty-one people running around, two standing at either end looking a bit disconsolate, and a further two running up and down the whitewashed lines on either side. Those latter two have whistles and flags. One of the men on the pitch also has a whistle, but no flag. Instead, he carries a couple of cards in his breast pocket. Every now and again he will take one of the cards and brandish it in the air, as if it were some kind of talisman of great import. He will always blow his whistle shortly beforehand. In addition to these… er, let me add the numbers quickly… these twenty-five persons, there is a twenty-sixth, a shadowy figure rarely if ever seen, known as “the fourth official”. You don’t need to worry your little pointy head about him.

Another thing you can do to pass the time is to keep a beady eye on the men in shorts who are nowhere near the foopball. They will occupy themselves in various ways, chief among them being standing with their hands on their hips, kneeling to retie their bootlaces, spitting, and darting about in brief little runs in every direction to no apparent purpose. Sometimes they might punch each other.

If, like Charles Babbage, you are neurasthenically sensitive to noise, you should be warned that the “soundtrack” to a foopball match, apart from dirge-like singing from the teeming thousands of spectators, is the blaring of hooters and klaxons. This blaring appears to be entirely gratuitous, a din for din’s sake. In olden times, before the hooter, spectators liked to hold aloft wooden rattles. They made less of a din, and were only ever seen or heard at foopball matches, unlike the hooter and klaxon which can be deployed in various other contexts. Nobody is quite sure what became of the common wooden rattle, not even the groundsman, who in his time probably collected a fair number of discarded ones from the grounds. One assumes they must have been discarded, otherwise they would still be being rattled, by spectators, in place of the hooting of hooters and the blaring of klaxons.

Certain more unruly spectators like to set off burning flares, as if they were lost at sea. You cannot play foopball in the sea. The nearest thing to it is water polo, and even this is more likely to be played in indoor pools rather than in the vast and pitiless ocean. But whitewash cannot be applied, in straight lines, to water, whether fresh or salt, pool or sea, so there is no role for the groundsman. That is why you will not find him listening, in his potting shed, on his transistor radio, to the commentaries babbled by spectators in special boxes with microphones at water polo matches. He has no personal investment in water polo, whereas with foopball he knows that in every moment of the game his whitewashed lines have significance. His work has heft.

Throughout the tournament you would be advised to keep a tally of the results. I realise I have not explained the scoring system, but that is something else you need not fret about, as there are big scoreboards next to the pitches which display numbers on them. At the end of each match you can copy the numbers into your World Cup 2014 Foopball Tournament Tally Ledger. One of these will almost certainly fall out of your daily newspaper before next week.