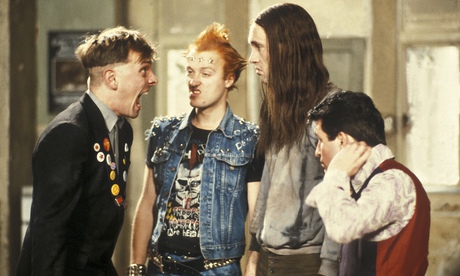 ‘It ridiculed humour itself’…A week on from the untimely death of Rik Mayall, Professor Nick Groom pays tribute to that peerlessly stupid yet brilliant sitcom The Young Ones…

In retrospect, it all seems so simple: a sitcom based in a dilapidated student house, showcasing upcoming young comedians. But that’s hardly recognisable as The Young Ones – which most people remember by the noisome exploits of its principal characters. They lived in ridiculous squalour, ate only lentils, made embarrassingly puerile jokes (in ironic postmodern fashion, of course), smashed up everything, and spent a lot of time shouting ‘You utter, utter bastard’ at each other.

The Young Ones is a sitcom, but a punked-up, magic-realist sitcom. Completely grotesque yet painfully accurate, it is a monstrous parody of students and the student lifestyle – and don’t anyone dare say that they live ‘just like the Young Ones’, unless whenever they are about to have a party their houses are half-demolished by gigantic ham sandwiches discarded by the Four Horsemen of the Apocalypse. Nevertheless, the four undergraduates are all embarrassingly familiar characters. Rik (Rik Mayall) reckons he’s a ‘right on’ anarchist and the people’s poet – in fact, he’s a sanctimonious and self-centred little prig with the emotional maturity of a sniggering thirteen-year-old; Vyvyan (Adrian Edmondson) is a psychopathic, headbanging medical student who sports a row of studs in his forehead and keeps a Glaswegian hamster called SPG (Special Patrol Group); Neil (Nigel Planer) is the fall guy, a miserable hippy always shuffling around and complaining about how ‘heavy’ everything is; and Mike (Christopher Ryan) is a midget conman evidently blackmailing the university’s vice-chancellor and living in a fantasy world of cool in which he effortlessly hobnobs with celebrities and sex kittens.

Together, these four explosively incompatible housemates barely do anything but bicker and fight about the most excruciatingly mundane things – paying the bills, going to the laundrette, borrowing a coin for the phone, answering the door. It is positively Beckettian in its banality – except that around this black hole of mindless boredom and acute pettiness revolves a mad universe of the strangest and most inexplicable events. Their whole hallucinatory world is teemingly alive: the fruit in the fridge makes cheap sexual innuendoes, the toilet eats bog-brushes, one of Vyvyan’s socks escapes and has to be beaten to death with a frying pan. The weirdest people come and go: members of the Balowski family (landlord, party drunk, international arms dealer, medieval jester – all played by Alexei Sayle); two shipwrecked men who are holidaying on a raft under a lightbulb in the cellar; Cinderella, who stays at their party past midnight and promptly turns into a pumpkin; the ghosts of two decapitated Elizabethans who get their heads mixed up; a premature Easter Bunny; and a teapot genie who gives Neil six pairs of arms. ‘The nuttiest things happen in this crazy house’, as Rik puts it at one point, aping a cretinously zany commentator: an unexploded atom bomb lands in front of the fridge, the lads discover that their wardrobe leads to the magical kingdom of Narnia, they appear on University Challenge against Footlights College, Oxbridge (despite Vyv losing his head on the way there when he oh-so rebelliously leans out of the train window), and the whole house is transported back to the Middle Ages. This last elicits the comment ‘Oh, who cares?’; they are most concerned that they might miss Scooby Doo.

Noisy, stupid, fantastically odd, and still unbelievably funny, The Young Ones was the ‘alternative’ comedy scene’s rambunctious coming of age. Most of the performers came out of London’s Comedy Store club, which was compèred by Sayle, and later by Ben Elton, and gave a platform to a new breed of aspiring, radical and subversive comedians. Mayall and Edmondson, for example, originally developed their ultra-violent slapstick, which features heavily in the show, as the Comedy Store’s ‘Dangerous Brothers’. But until The Young Ones, there had been hardly any television exposure of this edgy new comedy.

They tackled the new medium by deconstructing the whole concept of that TV standby, the sitcom. Mayall and Lise Mayer wrote the scripts, Elton pulled their stream-of-consciousness into shape, and they managed to combine situation comedy with the cabaret format of the Comedy Store, thereby introducing dozens of new comedians to the nation. But at the same time they created something that was so knowing, so self-aware and so self-mocking that it actually ridiculed humour itself. You laugh at the jokes, you laugh (again, of course, in ironic postmodern fashion) at the laboured jokes which mock the imbecility of mainstream comedy, and you laugh at the scathing satires of traditional sitcoms: ultimately, you laugh at the whole idea of people laughing at anything at all. It’s dizzying.

The post-punk generation needed to rebel against the old folks with something more than music and fashion, and The Young Ones did feel, if only for a few months, like the new rock’n’roll – not least because the show’s entirely spurious musical slot featured happening bands like Madness and Motörhead. The Goons, the Pythons, even The Goodies may have been as out of control as The Young Ones, but by the 1980s they were all firmly Establishment: the grand old tradition of anarchic British humour. Everyone from your father to Prince Charles told you to listen to the Goon Show, Python was a very English institution one followed with an awed and often baffled admiration, and parents, grandparents, and aunts and uncles would merrily endorse comedy from Fawlty Towers to Benny Hill. Yes, they were funny, but we young ones needed our own comedy – and The Young Ones was just that. Obsessed with zits, crapping and wanking, like the evergreen comic Viz it was in-your-face rude – which is precisely why our parents never got it.

Talking of parents, the hippy Neil Pye’s mum and dad once managed to visit him and his housemates, arriving in the middle of a street riot during which some joker has impaled a head to their front door. The episode (‘Sick’) is typical. All the characters – from the Young Ones themselves to the blazers-and-British-Legion Mr and Mrs Pye to a police officer who arrives simply to hit Rik with a chair – cheerfully admit that this is just a TV show.

Neil’s Mum: You have brought shame on your family, Neil. I daren’t show my face at Lady Fanshaw’s bridge evenings, now that you’ve taken up with these television people. I mean, what kind of monsters are you? I mean, The Young Ones. Well, it all sounds very good, doesn’t it? But just look around you. It’s trash!

[She smashes a chair.]

I mean… even Triangle has better furniture than you do!

Mike: I think you’ll find that was specially designed to fall apart like that, Mrs Pye. Rick was going to get hit over the head with it in the next scene.

This out-of-telly experience then continues with a sharp parody of Grange Hill, before the opening sequence of The Good Life rolls. Vyvyan spectacularly tears down the screen, declaring, ‘No! No! No! We’re not watching the bloody Good Life! Bloody, bloody, bloody! I hate it! It’s so bloody nice! Felicity “Treacle” Kendall and Richard “Sugar-flavoured-snot” Briers! …They’re just a couple of reactionary stereotypes, confirming the myth that everyone in Britain is a lovable, middle-class eccentric – and I HATE THEM!’ Rik, self-deluding anarchist and card-carrying Cliff Richard fan that he is, returns us to TV-land, declaring his love for Ms Kendall. The storyline then digresses into a cross between Macbeth and The Good Life, in which Rik accidentally kills Neil. Rik hides the body in manure, and is tortured all night by the voice of his conscience (which is so loud it keeps Vyvyan awake), before Neil returns from the grave – or rather Neils do: under the compost, Neil has germinated like a seed and grown into three. As the Neils greet the terrified Rik, the entire set suddenly disappears to reveal Neil’s parents and Brian Damage, ‘a violent and highly dangerous escaped criminal madman’, waving and blowing kisses to the studio audience from a glitzy stage while a continuity announcer declares, ‘Good evening, and welcome to Nice Time’. The Young Ones themselves frantically jump up and down flashing V-signs and trying to get into shot as the credits roll. Evidently nothing makes sense once your parents arrive.

It is not simply surreal, it is purely bizarre. And there’s another element that makes this so great, so British, and so funny: embarrassment. Embarrassment has always been a key feature of British comedy, and The Young Ones surely takes it as far as it can go. Neil’s parents coming to tea is embarrassing enough, but who can forget Rik’s party, where he forbids everyone to drink before the party starts, sucks up to his trendy sociology tutor like a total bloody swot, and thinks that a tampon is a carefully wrapped present – a mouse hiding in a telescope? Or Rik’s pretend girlfriend: having woken up in bed with a girlie, he gives a blow-by-blow account of their night’s adventures to his male housemates (which Mike records on tape), before she appears and reveals that the entire encounter is entirely fictitious. Rik is condemned to wear a sign around his neck reading ‘I am a Virgin’.

Even as I laugh, I still cringe. The Young Ones is less the successor to George and Mildred than the bastard love-child of Samuel Beckett and Alan Bennett. It is wild comedy based on endless and obsessive non-sequiturs and cataclysmic moments of fatal misunderstanding which generate their own crazy logic. Stupid is funny and, in this case, very stupid is abso-bloody-lutely hilarious.