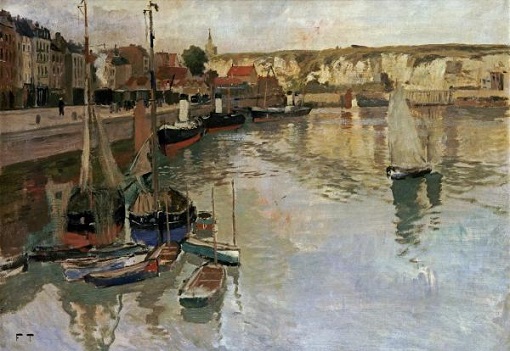 Nige visits the French town of Dieppe, once home to Oscar Wilde, Frits Thaulow and a society of Anglophile artists…

About this time last year I headed for Dieppe to spend a few days as a summer flaneur, a thoroughly restorative trip. Dieppe retains its unique, slightly faded charm, and its particular beauties of setting – the wide bay, the subtle, ever changing tones of sea and sky, and that extraordinary light, at once milky and sparkling.

There was sunshine too this time, plenty of it – and, on the last evening, one of the best meals I have ever had, anywhere. If you find yourself eating in Dieppe, waste no time – head straight for the Bistrot des Barrieres, right by the fish market, where the former chef at La Melie is now doing his own superb thing with the freshest and finest ingredients, simply and perfectly cooked… 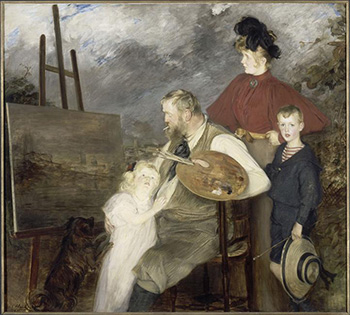 But enough of food. Our visit also coincided with an exhibition at the castle of paintings by Jacques Emile Blanche, the gifted Anglophile who dominated Dieppe’s artistic society for decades. The above piece of bravura portraiture – which is massive in scale and entirely uncharacteristic – was a highlight (of a kind) of the exhibition. A monumental work with the feel of a Baroque altarpiece, but drawing on the English tradition of open-air family portraiture, it depicts the Norwegian painter Frits Thaulow, his somewhat Amazonian wife, his son and his adoring daughter, in her turn adored by the family dog. In these unlikely circumstances, Thaulow, cigarette in mouth, attempts to paint a landscape.

Thaulow specialised in painting rivers and flowing water – one of his river scenes was in the exhibition (and caught Mrs N’s eye, who suggested I secrete it under my coat on the way out – but in fact the painting I most coveted was a quite beautifully accomplished late still life by Blanche, of white hellebores in a dark blue vase beside a yellow bowl. I could live with that…).

When they set up house in Dieppe, Thaulow and his wife were notably friendly, generous and hospitable to all, and were among the few in the cliquey and fissiparous world of ‘Dieppe society’ who were without enemies. Thaulow was also one of those who did not shun – as Sickert and, against his better instincts, Blanche did – Oscar Wilde when he arrived in Dieppe after serving his prison sentence. On one occasion when Wilde was being publicly humiliated in a cafe, Thaulow rose from his table, strode over and boomed at him, ‘Mr Wilde, my wife and I would feel honoured to have you dine with us en famille this evening.’ Wilde gratefully accepted and became a frequent visitor at the Thaulows’.

Sadly the Cafe Suisse, outside which Wilde would sit in his Dieppe days, holding court and being summarily ‘cut’, has had a recent garish makeover that has erased every last trace of its illustrious fin de siecle past. Such a shame it wasn’t, rather, restored to its red plush and gilt glory. On the other hand, one of the remaining traces of the great days of the English community in Dieppe – the fading remnant of an ‘English Grocers’ sign near the Cafe des Tribunaux – has been repainted and now looks as good as new, though of course the building it was painted on no longer houses an English grocer’s shop. 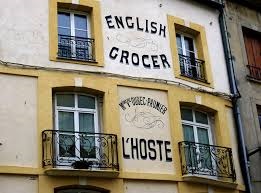