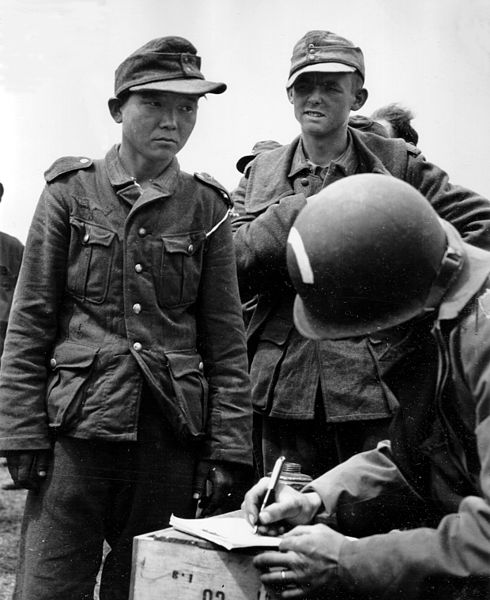 Yang Kyoungjong surrendering to US troops

Pictured above at the moment of his capture is the subject of this week’s unusual Wikipedia article. No wonder he looks a bit glum…

Yang Kyoungjong (c. 1920 – April 7, 1992) was a Korean soldier who fought in the Imperial Japanese Army, the Soviet Red Army, and later the German Wehrmacht.

In 1938, at the age of 18, Yang was in Manchuria when he was conscripted into the Kwantung Army of the Imperial Japanese Army to fight against the Soviet Union. At the time Korea was ruled by Japan. During the Battles of Khalkhin Gol, he was captured by the Soviet Red Army and sent to a labour camp. Because of the manpower shortages faced by the Soviets in its fight against Nazi Germany, in 1942 he was pressed into fighting in the Red Army along with thousands of other prisoners, and was sent to the European eastern front.

In 1943, he was captured by Wehrmacht soldiers in Ukraine during the Third Battle of Kharkov, and was then pressed into fighting for Germany. Yang was sent to Occupied France to fight in a battalion of Soviet prisoners of war known as the “Eastern Battalion”, serving in a battalion located on the Cotentin peninsula in Normandy, located close to Utah Beach. After the D-Day landings in northern France by the Allied forces, Yang was captured by paratroopers of the United States Army in June 1944. The Americans initially believed him to be Japanese in German uniform, and he was placed in a prisoner-of-war camp in the United Kingdom. Yang later emigrated from Russia to the United States, where he lived until he died in Illinois in 1992.