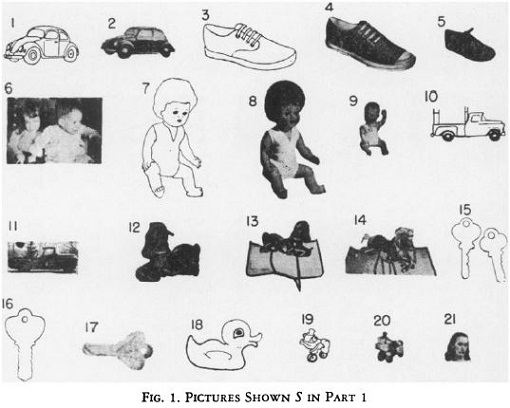 In the early 1960s two behavioural psychologists attempted to bring up a child in an environment devoid of pictures. But what, exactly, did they prove?…

Imagine if, in infancy, your parents made every effort to ensure that you never saw a picture. This is what happened to the anonymous subject of Julian Hochberg and Virginia Brooks’s 1962 paper “Pictorial Recognition as an Unlearned Ability in a study of one child’s performance”; a title which has the virtue of describing precisely what they set out to do.

It had been claimed that certain tribal groups, for whom pictorial depictions were unknown, found pictures frightening and inexplicable. Various accounts from David Livingstone himself and others from his era had included dramatic accounts of natives running in fright from pictures of lions and so on. Later, perhaps more purely anthropological, studies had suggested the same thing. Therefore a theory that the ability to recognise pictures as pictures and also representations must be a learnt ability. Hochberg and Brooks observed there is a weaker version of this hypothesis; claimed that learning was needed to recognise line-drawings, but “the naïve recognition of photographs, with their higher ‘fidelity’, would be admitted.” Hochberg and Brooks embarked on their study “to determine whether a child who had been taught his vocabulary solely by the use of objects, and who had received no instruction or training whatsoever concerning pictorial meaning or content, could recognised objects portrayed by two-dimensional line-drawings and by photographs.”

The paper recounts the story of S: “since birth, the subject (S), a boy, had been exposed to and taught the names of a wide variety of toys and other solid objects … S never was told (or allowed to overhear) the name or meaning of any picture or depicted objects In fact, pictures were, in general, kept from his immediate vicinity.”

Such a regime in the mid-twentieth century was difficult to sustain: “this is not to say that S never had been exposed to picture. There was a Japanese print on one wall of a room through which he frequently passed; a myriad of billboards fronted the highways on which he travelled frequently; a few times (six in all) he accidentally encountered a picture book (which was gently withdrawn) or caught a glimpse of the label of a jar of baby food (these were normally removed or kept covered). (All these encounters were unaccompanied by instruction or naming play)”

You have to love the precise cataloguing of how often the picture book was accidentally encountered, and the regret that the Japanese print and the myriad of billboards happened to float into S’s ken. Not only that “one toy (a top) had picture of elves on it and, accordingly, it was available for play only under strict supervision to prevent any naming in his presence; a high chair had a decal of babies on it, which could be glimpsed (without parental comment) only when S was being placed in the seat.”

Not for nothing do Hochberg and Brooks comment “the constant vigilance and improvisation required of the parents proved to be a considerable chore from the start – further research of this kind should not be undertaken lightly.” This line made me wonder if S may in fact have been the offspring of Hochberg and Brooks themselves, although I can find nothing explicit and no other internal evidence, apart from the absence of any comment as to how S was recruited (there are later papers credited to Julian Hochberg and Virginia Brooks Hochberg)

By 19 months, the boy began to seek out pictures for himself, and testing began. 21 pictures, mixing line-drawings and photographs of the same objects, were presented to S one at a time, “a somewhat unsuccessful attempt being made to convert the test to an interesting game.” After this, the boy was given picture books, but adults did not engage in picture-naming activities with him. This continued for a month, with “free (but monitored) access to still pictures, but motion pictures, TV and picture-naming play still were completely avoided.” Another round of testing along similar lines took place. Both tests were tape-recorded and independent judges assessed if they could identify that picture based on S’s utterances. Hochberg and Brooks were able to conclude that “it seems clear from the results that at least one human child is capable of recognising pictorial representations of solid objects (including bare outline drawings) without specific training or instructions.” 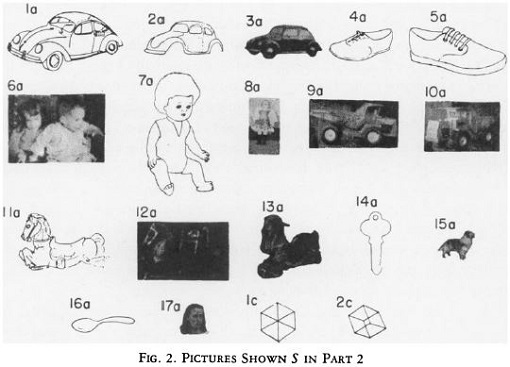 Psychology textbooks and popularisations are replete with certain key case studies and experiments. There’s the case of Phineas Gage, a Vermont railway worker who suffered a catastrophic injury to his frontal lobes and suffered, so the textbook story goes, a spectacular personality change. There’s Little Albert, conditioned to fear furry things including beards and Santa Claus, thereby (supposedly) proving the tenets of behaviourism. There’s the obedience and prison experiments of Zimbardo and Milgram, thereby (supposedly) proving the essential sadism of humankind.

It almost invariably turns out that these stories are more complex than they are presented. Phineas Gage did survive a pole through his frontal lobes; but the most immediate report described him as “in full possession of his reason”, and two years later the Professor of Surgery in Harvard stated he was “quite recovered in faculties of body and mind.” Only later did a narrative of dramatic personality change emerge. The Zimbardo and Milgram experiments have been rigorously criticised on methodological grounds, and certainly do not seem to “prove” all that much about human nature in the end.

Little Albert is perhaps the most infamous experiment from the early years of experimental academic psychology. In 2009, Little Albert was tracked down. Or rather his grave was; for Albert had died of hydrocephalus only a few short years after the experiment. Typically, it turned out the experiments may not have proved all that much after all.

The subject of Hochberg and Brooks’ experiment is, more than likely, still out there (a couple of years ago I found an email for Julian Hochberg and wrote to see if he could update me. I never heard back). Julian, who got his PhD in 1949 from Berkeley, has a web bio on the Columbia University site. A ballet site lists dance films made by a Virginia Brooks and produced by a Julian Hochberg. One wonders did the effort to deprive S of pictures end at 20 months or were there any attempts at extending it.

S’s story is not as striking as Little Albert’s, or Phineas Gage’s, and it doesn’t seem he suffered all that much. It is hard to imagine such a study happening today, not so much due to ethical reasons as that with the endless trumpeting of the importance of the early years of infancy for development, what parent would agree to allow their little treasure to be deprived of any form of sensory stimulation?

4 thoughts on “The Boy Who Never Saw Pictures”