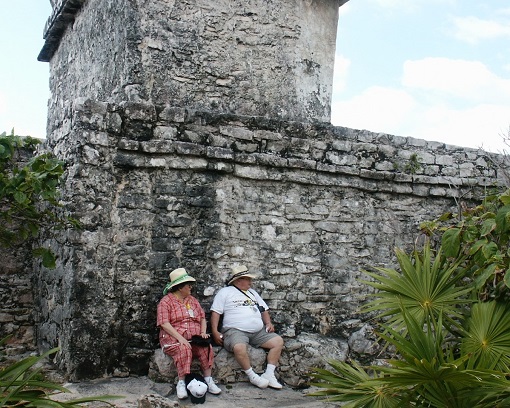 We may like to think we’re savvy travellers, not typical tourists, but things can go horribly wrong…

I’ll never forget the moment we realized we were lost – in rural Mexico, neither of us with a word of Spanish, our cruise ship a long bus and boat ride away and due to sail at sundown. The word panic isn’t really adequate. And we had been warned – stay with the group, don’t wander off. As Americans, our Mexican tour guides treated us like helpless children unfamiliar with the ways of the world. But we felt capable and adventurous. We wanted to explore the ruins ourselves, not be shepherded around like a herd of docile cattle. Determined not to behave like typical American tourists, we nevertheless ended up the stereotypical innocents abroad.

Tulum on the Yucatan peninsula was the last stop on our tour. We had decided on a Caribbean cruise, not for the experience of the cruise itself, but as a convenient way to visit several Mayan ruins in one trip. At each port of call, as the majority of passengers disembarked for shopping and ersatz displays of foreign “culture” close to the ship, we took a day trip to a Mayan historic site. But all did not go as planned. The highlight of our tour was supposed to be a visit to the largest Mayan city of all, Tikal in Guatemala. We were scheduled to leave before dawn, flying to Guatemala in a small plane restricted to just six passengers. But the evening before a note was slipped under our cabin door. The expedition was cancelled. “Please see the shore excursion desk for an alternate activity,” the note advised. The official at the desk explained that the trip was cancelled because we were the only passengers to sign up. We wondered why. “People are afraid to go there,” she responded. It turned out that the State Department, and the British Foreign Office, had issued travel warnings for Tikal because of several violent attacks on tourists at the ruins. Our disappointment faded to relief that we had been spared a little too much adventure. We were happy to sign up for an alternate Mayan destination, Xunantunich in Belize.

The next morning we boarded a bus in Belize City, a dusty, shabby town with an air of faded glory from its colonial past as capital of British Honduras. The bus passed through miles of desolate countryside interspersed with sad villages full of barefoot children who ran after the bus calling out as we sped by without stopping. Near one village we came upon the incongruous sight of an Amish horse-drawn carriage. Our guide explained that there is a large Mennonite community in Belize. The Mennonite farm he pointed out looked neat and prosperous in contrast to the neglected, impoverished appearance of most of the country we passed through. After traversing almost the entire width of Belize we arrived in Xunantunich, close to the border. We had read so much about Tikal in preparation for our planned visit, but here we didn’t know what to expect. It was a revelation – a magnificent deserted ruin (we were the only tour group that day) presided over by El Castillo, an imposing stepped pyramid with an elaborate carved frieze along one side. From the top we could see for miles across the tree canopy into the country it was too dangerous to visit, Guatemala, less than a mile away. Here the only hint we might be in danger came when we glimpsed rifle-toting soldiers prowling through the trees surrounding the ruins. For our protection, the guide explained. From what he didn’t say.

The next day we left Belize and sailed on to Cozumel in Mexico, the starting point for our last shore excursion to the ruins at Tulum. We had avoided danger in Guatemala and Belize, but we were destined to create our own in Tulum. Perched on the cliffs above the sea, Tulum’s beautiful and relatively accessible location makes it a popular tourist destination. The enormous parking lot was filled with tour buses. The ruins lay a ten minute walk away along a winding unpaved road. Our guide warned us to stay together, but cautioned that if we did become separated from the group, to be sure to leave enough time for the walk back to the bus. We had to leave promptly, he reminded us, as the ship was scheduled to sail with or without us! Unlike Xunantunich, Tulum was crowded with people and our own group was an unwieldy size for following a guide around. We decided to break away and explore on our own, confidant that we would have no trouble making it back to the bus along what appeared to be the only access road. We spent a wonderful couple of hours exploring the ruins, enjoying the view from the cliffs, and taking photos with our new digital camera. I made a game of finding camera angles to take photos that, despite the crowds, showed no people cluttering up the view. Looking over them now, I was successful, because they make it appear we were exploring a deserted ruin. I made one exception, when I spied a seated couple who looked just like the stereotype of American Tourists Abroad. I couldn’t resist, and snapped a quick portrait before they noticed [above]. Perhaps what happened next was payback for my moment of supercilious snobbery.

We headed back along the road to the bus deep in conversation about all we had seen and, for a while, oblivious to our surroundings. We passed a large trolley bus waiting for visitors who couldn’t manage the walk. We would have done well to hop aboard, for afterwards we realized that it was blocking our view of the crucial fork in the road. We walked on and at some point came upon a gate. We agreed it hadn’t been there on the way in and wondered why it had been closed. Did the trolley driver have to get out and open it on every trip? And why hadn’t the trolley passed us by now? These were mere idle curiosities and we had no qualms about stepping around the gate and walking on. But gradually we noticed more and more things that didn’t seem quite right. Where were all the other tourists? On the way in the road was crowded with people walking in both directions. We were completely alone. And hadn’t we mentioned how awful it was that the side of the road was strewn with trash? Now we saw none. We looked at our watches. We had been walking for more than ten minutes at a pretty good pace. But still we resisted the idea that we had come the wrong way. We were so sure that there was only one road connecting the parking lot and the ruins. We agreed that we couldn’t have much further to go; surely we would see the buses around the next bend. We walked on, silent and anxious now. We passed a restaurant set some way back from the road down a steep trail. Outside two taxis were parked, the drivers lounging on the hoods chatting and smoking. We walked on, anxiously glancing at our watches, a horrid realization setting in. The trees gave way to open fields, the road stretching ahead of us to the horizon, straight as a die. There was absolutely no sign of any parking lot filled with buses. We had been walking for over twenty minutes. Our bus was scheduled to leave in ten minutes more. There was no time to retrace our steps and find the right road. We were lost in Mexico.

Ever since I’ve imagined it from the taxi drivers’ point of view. A gringo woman running down the trail towards them waving her arms frantically and yelling “Do you speak English? Lost! English! Lost!” I may have behaved embarrassingly like a hysterical American tourist but that is what the occasion called for. The elder of the two drivers knew enough English for us to explain our predicament. We had to get back to the buses at the ruins in ten minutes. Could one of them drive us back? Then we learned the meaning of that gate across the road. The way we had come was closed to traffic. We would have to go the long way round involving three other highways and no hope of doing it in ten minutes. My husband basically offered them all the cash he had to give it a try. In retrospect there are so many things that could have gone wrong. If we hadn’t noticed the taxi drivers outside that restaurant we would definitely have missed the bus and the ship. Or the taxi drivers could have turned out to be criminals who took advantage of a pair of foolish tourists, robbing us or worse. Or we could have died in a horrendous car crash. For some reason it was the younger man, who spoke no English, who agreed to take us. He drove like an absolute maniac, overtaking trucks on the wrong side of the road, swerving away from oncoming traffic at the last second. It was a miracle when we screeched to a halt in the middle of the parking lot a full twenty minutes late and saw our bus still waiting. I jumped out and sprinted over to make sure it didn’t leave while my husband emptied his wallet of every kind of currency he had. Our bus driver was pacing back and forth impatiently and was not mollified by our mumbled apologies. The other passengers gave us accusing looks. We were humiliated, but safe.

By the time we sat down to dinner on the ship the episode had become an amusing tale of adventure with which to regale our fellow cruisers who hadn’t ventured beyond the tourist trap of Cozumel. But inside I wondered if I was really any different from that typical tourist couple I had so complacently photographed in the ruins of Tulum.