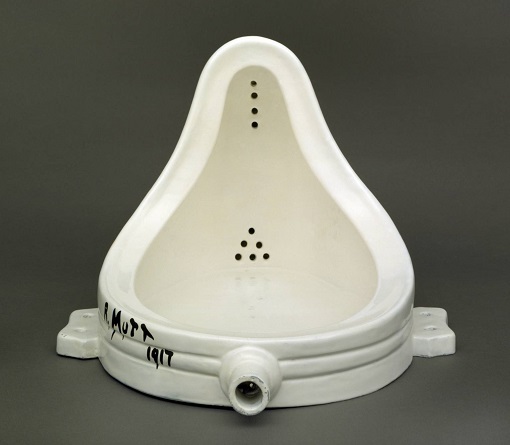 That ludicrous mountebank Damien Hirst has delivered a statement. Of Henry Moore, he says: “His subjects are eternal, which is true of all the greatest art.” I suppose we ought to thank Mr Hirst for explaining that to us, although I am not sure whether to weep or laugh. A pronouncement from him about “the greatest art” is rather like a political lesson from Russell B—d (a person whose name my nerves are too delicate to type in full.)

Having my attention drawn – however fugitively – to Damien Hirst led me to ponder his type of “art” more generally. And I returned, as I always do when such thoughts assail me, to Marcel Duchamp’s Fountain, the “readymade” urinal he signed (as “R. Mutt”) and submitted to the New York exhibition of the Society of Independent Artists in 1917. In the pell-mell development of modern art, Fountain was probably necessary. But it was a full stop. Almost one hundred years have passed, and in all that time there really has been nothing to add – though Lord knows many have tried. The myriad effusions and interventions and installations and interrogations of a myriad gaggle of frauds and chancers and halfwits and Hirsts all pale in comparison. Duchamp made a decisive statement with simplicity and clarity and wit, and all that has followed is – there is no other word for it – twaddle. Thus spake Mr Key.

But can Duchamp claim all the credit? While I was bogged down in research for the forthcoming Christmas stocking-filler Mr Key’s Shorter Potted Brief, Brief Lives, I was intrigued to learn that Duchamp was accompanied on the shopping trip to J. L. Mott Iron Works on Fifth Avenue, where he bought the urinal, by Baroness Elsa von Freytag-Loringhoven. She it was, apparently, who picked it out and suggested he exhibit it.

The Baroness thus joins the long list of overlooked and neglected women in the history of art. In American exile during the First World War, she became besotted with fellow expatriate Duchamp, a man of whom it was said “he could insinuate his hand under a woman’s bodice and hug her very body without it being at all apparent”. She was a talented Dadaist in her own right, giving performances in which she dressed in a bustle with a tail-light, a brassiere made of tin cans and string, a necklace composed of a birdcage with a canary inside, and a French soldier’s helmet on her vermilion crewcut.

After the war, she returned to Europe, dying aged fifty-three in Paris in 1927. Her (uncensored) poems were published, for the first time, in 2011 by the MIT Press.

One thought on “Duchamp’s Fountain”