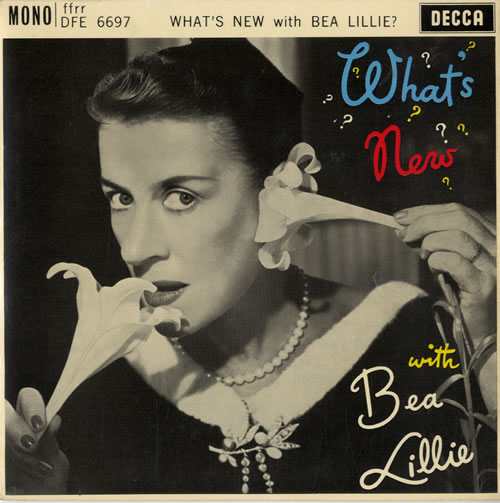 Today marks the birthday of Beatrice Lillie, born on this day in 1894 in Toronto. Beatrice who? you may well be asking – and with good reason. Though she had a huge reputation in her day, ‘Bea’ Lillie specialised in the most ephemeral and fast-dating forms of comedy: stage revue, comic songs, parodies and routines – and was not keen on making films.

There’s little in what footage of her survives to explain her reputation as the ‘Funniest Woman in the World’. According to Sheridan Morley, her gift was for ‘the arched eyebrow, the curled lip, the fluttering eyelid, the tilted chin,  the ability to suggest, even in apparently innocent material, the  possible double entendre.’ I guess you had to be there.

Lillie was certainly a formidable professional. Her revue contracts invariably stipulated that she would not step onto the stage until at least half an hour into the show, to ensure maximum impact. Rather chillingly, when she received news of the death of her son as she was about to go on stage to entertain the troops, she insisted the show should not be cancelled: ‘I’ll cry tomorrow,’ she declared.

This was her only son – by Sir Robert Peel, 5th Baronet (in private life, she was Lady Peel). Beatrice remained married even after she took up with a fellow entertainer, John Philip Huck, some 30 years her junior.

She succumbed to Alzheimer’s and died at the age of 94, in 1989. Huck died of a heart attack barely 24 hours later.

2 thoughts on “Beatrice Lillie – The ‘Funniest Woman in the World’”