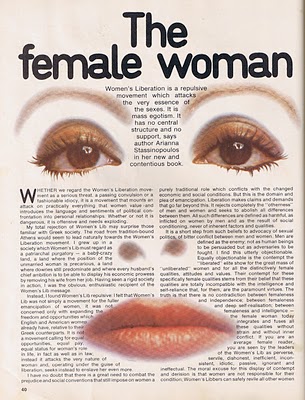 Rita on Arianna Huffington and the American religion of self-improvement…

The first self-improvement book I ever owned was a gift from my mother. She was obviously worried that I was turning into a bluestocking Women’s Libber. The cover featured a photo of a young woman who looked like a throwback to the 1950’s. In an era when women wore jeans or mini skirts she was draped in a frilly, floral dress, her hair arranged in puffy coils around a sweet, simpering smile. The book was called The Female Woman and its author was Arianna Stassinopoulos, a young Cambridge graduate and aspiring journalist. My mother seemed eager to prove to me that it was possible to be an intellectual and a traditional feminine woman at the same time. The book argued against the then fashionable tenets of Women’s Lib, particularly Germaine Greer’s influential The Female Eunuch. Ms. Stassinopoulos attacked the idea that women should be on an equal footing with men in the workplace and extolled the traditional roles of homemaker and mother. She seemed oblivious to any conflict between her stated views and the fact that she herself was shimmying up the professional ladder with undisguised ambition. My mother was an adoring Arianna fan, but I don’t think I ever finished the book. Long ago it disappeared from my book collection, probably in a box of donations to the library!

I’m reminded of my mother’s gift because Ms. Stassinopoulos, now known to the world as Arianna Huffington, has just published another book urging us all to improve our lives. Once more there is a disturbing gap between what she practices and what she preaches. In her American career Ms. Huffington has pursued money, power, recognition, and fame with an unrelenting drive. Indeed she is the poster woman for the mega-successful pursuit of the American Dream. Yet in Thrive she advises the rest of us to eschew the pursuit of “money, power, recognition, and fame” and instead find our “place of wisdom and peace and strength” to create “a life of well being, wisdom, and wonder.” This philosophy she calls “the third metric.” I’ve noticed that self-improvement books often have a number in the title – like the Seven Habits or the Four Agreements. It makes their prescriptions seem so manageable. Wow, we only have to do three things to be as successful as Arianna! Well, not exactly. We won’t have her money or power or fame. She, who possesses all three in abundance, can afford to discount their importance. But for the average American struggling with work, childcare, and bills the promise of “wisdom and wonder” is a bit abstract to say the least. So you might think there wouldn’t be much of a readership for Thrive, but you would be wrong. Ms. Huffington may be foreign-born, but she does have her finger firmly on the pulse of her adopted country. That is how she has “thriven” so well over here.

Arianna understands that self-improvement is in the American DNA, and so is trying to find a short cut to success, material or spiritual. “The pursuit of happiness” is enshrined in the Declaration of Independence as a central tenet of the American enterprise and from the earliest days happiness was associated with wealth; its pursuit linked to a virtuous striving for self-improvement. Perhaps the first of what would become a flood of self-improvement books was Benjamin Franklin’s 1757 The Way to Wealth, which prescribed hard work and cleanliness as keys to success. Later the Transcendentalist movement added a spiritual dimension to the pursuit, which in the 1960’s became a fascination with eastern philosophies. By the late twentieth century self-improvement books had grown to be one of the best-selling genres, each decade reflecting an evolving concept of how to achieve success and happiness. There was a fashion for applying management concepts to everyday life (How to Win Friends and Influence People), an era of pop psychology (I’m OK, You’re OK), and now we are in the age of “empowerment” exemplified by books like Lean In and Thrive. But what all these books have in common, and what makes them so popular, is that they offer tantalizingly simple step-by-step answers to the complicated dilemmas of life. What could be easier than “Think and Grow Rich”?

Arianna Huffington’s career is a master class in the ultimate self-improvement program: the American Way of constant self-reinvention. She has been a journalist, society hostess, political wife, political candidate, and New Media moghul. The key strategy for self-reinventors is to admit no failure. Pretend it never happened, pick yourself up, and swear allegiance to another self-improvement program. Arianna failed as a political wife (her Republican husband lost an election and turned out to be gay) and failed as a politician (she lost a run for California governor in a field of candidates including Arnold Schwarzenegger), but without a backward glance she reinvented herself as a Democratic strategist and mistress of the Huffington Post. John Stewart recently called her a combination of William Randolph Hearst, Martha Stewart, and Oprah. Why stop there? Throw in Mother Theresa for good measure!

It is easy to lampoon the American obsession with self-improvement, but there are other ways to look at it. When I first returned to England after seven years in America I sensed a suffocating atmosphere of complacency and self-satisfaction, almost a wallowing in the status quo. The English seemed so set in their ways they couldn’t even see a need for self-improvement, never mind wear themselves out with American style striving. I realized that exposure to the heady American air of unlimited possibilities had changed me in a fundamental way. I couldn’t go back. The Old World is still lashed to Fortune’s wheel but here in the New World fortune is just a 12-step program away! It is a rather touching faith, more fundamental to American culture than the oft touted “Christian Values.” The dark side of this faith, which certainly conflicts with Christian values, is the belief that those who fall behind and fail are responsible for their own fate. If they had only followed the program, worked harder, read the right self-improvement books! So poverty is blamed on the poor. The American Way is full of dreams, and hopes, and possibilities, but it can be unforgiving, even brutal.

Ms. Stassinopoulos/Huffington has come a long way since she advised young women of my generation to embrace traditional femininity. Maybe it was her Greek heritage rather than her English education that helped her self-improve and strive her way to the apex of American success. I may not read her new book, but I salute her. Long may she Thrive!

4 thoughts on “Strive to Thrive”