Continuing the theme of plagiarism from Nige’s post, here, raised from the archives as a Bank Holiday treat, is Noseybonk’s take on the dodgy hack Johann Hari…

Those who have been following the remarkable case of the plagiarising, Wikipedia-manipulating Independent journalist Johann Hari will know that he has handed back his Orwell award (the plaque that is, not necessarily the cheque) and gone back to journalism school to learn how to write proper.

His first assignment of the term was, naturally, to pen an account of his summer entitled What I Did On My Holidays. In an exclusive for The Dabbler, Noseybonk has managed to get his hands on the manuscript, which received a grade of B-.

What I Did on My Holidays – by Johann Hari, aged 31

My holidays began in grim circumstances, with the death of a great artist and dear friend. I’ll never forget my first meeting with Amy Winehouse. It was 2006, and we were sitting in the snug of The Spiked Armadillo, her favourite pub in Camden. Over a tanqueray and tonic, I asked her about the rumours of her problems with alcohol, then not widely known.
“They tried to make me go to rehab,” she told me.
“And what did you say?” I asked, surprised.
“I said no.”
“No?”
“No!”
I believe I was tapping my pen in a classic motown rhythm. We both paused, looked at each other and started humming. I can’t in all conscience claim direct responsibility for her breakthrough hit Rehab (I point-blank refused Amy’s demand that I take a writer’s credit). But, given what happened to Amy – her great success, and her inability to handle that success – neither can I entirely wash my hands of all blame for her tragic early death. If you demand high standards of others, you have to be just as damning when you fail to uphold them yourself. Therefore, even though I still stand by the quality of the songs we co-wrote, I will be returning the numerous platimum discs, MOBO and Grammy awards that we won for our albums Frank and Back to Black, and enrolling on a course, at my own expense, at music school. I apologise to all concerned. 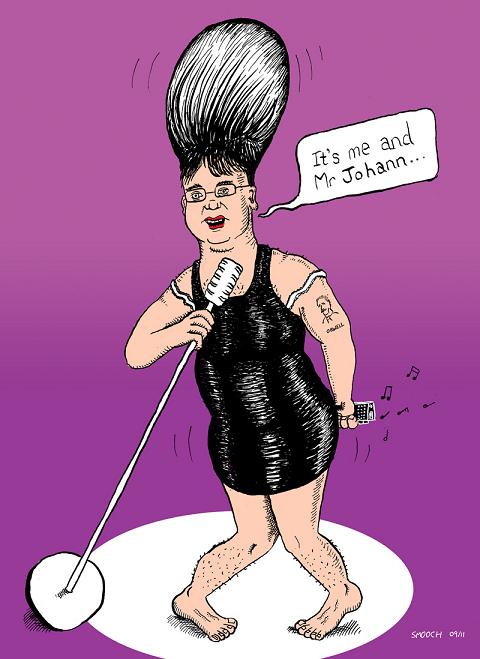 It wasn’t long after Amy’s demise that I broke the News of the World phone hacking scandal, a story which rocked the world of journalism only slightly less than my difficult but ultimately courageous decision to return my Orwell award even though I still stand by the triumphant and ultimately true article that won it.

It brings me no joy to make moral judgments about my fellow members of the journalism profession, but if you demand high standards of yourself (and I do, as proven by my decision to give back my Orwell award) then it’s only right that you damn others when they fail to uphold those same standards. I think we can all agree that plagiarizing other people’s work and pseudonymously changing your rivals’ Wikipedia entries to describe them as anti-Semitic, homophobic drunks, though undoubtedly questionable behaviour, is nowhere near as bad as hacking into celebrities’ voicemail accounts, and that the hacks who committed these crimes are despicable human beings and probably homophobic, drunken anti-Semites too.

Of course, I was saddened that two of my own award-winning investigative scoops for News of the World – in which I exposed Pakistani cricket match-fixing and the corrupt dealings of Sarah Ferguson, Duchess of York by disguising myself as an Arab businessman – have now been tarnished by association with that paper, but, because I demand very high standards of myself, I will be returning my Reporter of the Year awards and enrolling on a course, at my own expense, in Ethics and Philosophy at a university of some sort at some point in the near or distant future. I apologise to all concerned.

The third and perhaps most significant event of my holidays was the rioting that swept Britain during one mad week in August. I was in London on that night when the flames began to rise and all around the sound of smashing glass was like a cacophony of smashy sounds. The next night I was in Birmingham when the dark side of multiculturalism was exposed for all to see amid the sound of sirens and the rising flames. I was also in Manchester when the council estate boys, excluded from society and with nothing to lose, howled their hymn of nihilism and despair. I was also in Bristol, Gloucester, Liverpool and a few other smaller places, I forget which they were now. Anyway, I saw it all at first hand. I looked into the eyes of those hoodies and saw frightened boys. Frightened boys struggling under the weight of broken dreams and very large flatscreen televisions.

With the dust still settling and the flames just dying down, now is not the time to jump to sweeping generalisations about root causes. Nonetheless, I think we can all see this is the fault of the banks. As Karl Marx said to me one evening in the snug of The Spiked Armadillo, “You have nothing to lose but your chains.” I do not condone the looters. Understanding is not the same as justifying. What the looters did, though justified, was wrong when judged by the high moral standards set by the likes of myself and Jesus. That’s why I will be returning the 42-inch Panasonic and six pairs of Reeboks to their respective shops in North London, even though I do still stand by the quality of those products. I apologise to all concerned.

Noseybonk would like to apologise for making up the above, and assures readers that he will be enrolling, at his own expense, on a course at the Johann Hari Rehabilitation Centre for Sanctimonious and Vindictive Little Fraudsters.

Not joining him there will be the numerous lndependent-reading Twitter-users such as Stephen Fry and Josie Long who leapt to the defence of Hari when he bravely admitted his guilt after getting caught red-handed, and nobly offered to return his Orwell award after being threatened with having it stripped from him. The valid point those wise Twitterers make, of course, is that such ‘mistakes’ as fabricating material, or stealing the work of other journalists because you are too lazy or technically incompetent to conduct a coherent interview yourself, or using the pseudonym David Rose to make malicious slanderous accusations on the Wikipedia profiles of your journalistic rivals, are trivial details when you remember that, as an environmentalist anti-corporate left-winger, Johann Hari is ultimately on the side of Good. And anyway, as Hari’s apology clearly states, none of it was really his fault.