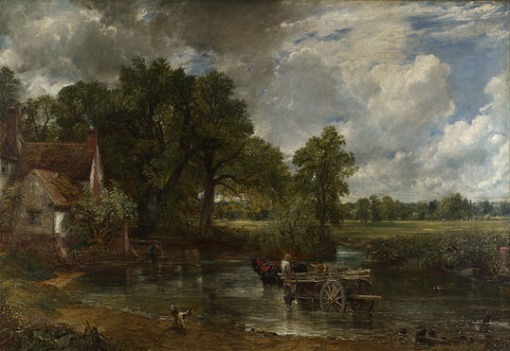 That was my instruction, that morning, from the overseer. But there were so many carters passing along the lane, driving their carts to, or back from, the market square in the village, that I had no idea which carter to get. Nor did I have a clue what to do with the carter when I got him, other than to take him to the overseer.

So I hid behind a splurge of lupins beside the lane, lying in wait for a carter weedy enough for me to overpower. I realised I may have to wait quite some time, for all the carters passing by were big burly types who would swat me aside with their fists and forearms. My name is Vercingetorix, and I am puny.

My instruction was to get a carter, not their cart, but I could not just leave a carterless cart abandoned in the lane. It would attract remark, and remark could lead to pursuit, and pursuit to capture, and capture to blows and bruises and blood. When getting my carter, I would have to shove their cart off the lane and conceal it behind a splurge of lupins or, better, a hedge, where it would go unremarked. This was going to prove more difficult than I thought.

The sun was high and searing when at last, along the lane, came toiling a weedy-looking carter pulling a creaky old cart piled high with what I took to be turnips. Fortunate for me that this was a land without horses, or indeed pack animals of any description, for that saved me an additional quandary. I had only to get a carter and hide a cart, not hide a horse or donkey into the bargain.

I sprang out into the lane in front of the weedy carter.

The carter, startled, pulled from his cummerbund a firearm, cocked it, and pointed it at my head. Reluctantly, I had to let him pass, and I scuttled back behind the splurge of lupins.

The next few passing carters were of the big and burly type, so I dared not spring out in front of any of them. I hid and hummed quietly and smoked and popped open a can of Squelcho! to quench my thirst. Towards noon there was a lull in cart-traffic, so I took the opportunity to practise my springing, leaping out into the lane and waving my arms in an alarming manner, shouting my head off. In doing so I spilled some of my Squelcho! but the little puddle it formed was soon lapped up by a dog. This dog appeared to be a dog without a master, and I wondered if it might be a helpful ally in my mission to get a carter. If I sent it bounding out from behind the splurge of lupins, yapping, it might disconcert a weedy dog-frightened carter long enough for me to get him and shove his cart out of sight.

I beckoned to the dog. I have a way with animals. I inspire pathetic devotion in dogs, cats, squirrels, even geese and leafcutter ants, just by my beckoning manoeuvre, a sort of gentle sweeping of the arm accompanied by intricate hand movements and a whispered incantation. Sure enough, the masterless dog followed me to my place of concealment behind the splurge of lupins. Immediately, I set about training it to yap at a carter. For this purpose, I fashioned a sort of makeshift cart out of the empty Squelcho! can and some twigs and lupin-petals. It didn’t look much like a cart, but I mimed pulling it and pushing it in a straight line, as if along the lane, to represent which I scored a groove in the patch of ground behind the splurge of lupins with the heel of my winklepicker. The dog gazed at me adoringly.

All of this took quite some time, and I quite neglected to keep an eye out for passing carters. Indeed, several weedy specimens I could have overpowered, even without the dog, went a-trundling their carts along the lane, as I learned later when reviewing the CCTV footage, back at the depot. The overseer was not best pleased. He ranted at me, while the dog cowered behind a filing cabinet. He called me a nitwit and a knave and several other choice words. I had been given a simple task, to get carter, and instead I was found faffing about behind a splurge of lupins with a dog and an empty can of Squelcho! and twigs and petals. I was not only puny, I was hopeless and incompetent. Still, the overseer was willing to give me one more chance. He told me to report to him the next morning for a new instruction.

“Will do!” I piped up, trying to show enthusiasm. “Can I bring the dog?” I added.

He shook his fist in my face and told me to begone.

The next morning I turned up bright and early at the depot, dog in tow. The overseer was rummaging through paperwork and barely glanced at me. I wondered if he wanted me to get carter again. But no.

“Bring me the head of Alfredo Garcia!” he shouted.