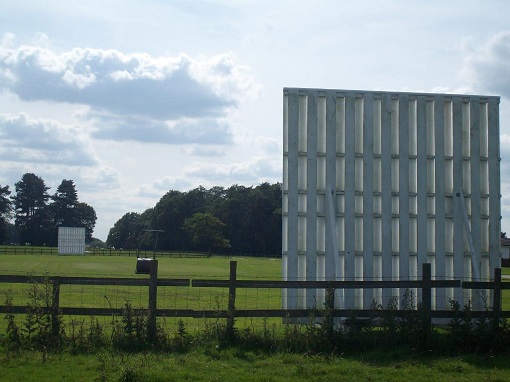 It’s hard to write about a feeling as elusive as this one, yet it’s that elusiveness that makes it both rare and worthwhile. It happened the other day, for the first time in a couple of years. I was driving through a town somewhere when the road became familiar in a way that might have been real or imagined. On one side was a high wooden fence with another chain-linked one behind it, reaching even higher. Ivy was growing up through its gaps. The traffic slowed, caught by a set of pedestrian lights just ahead. Through a couple of fence panels that had warped and come apart from one another I caught sight of a blade-width of green field and a fragment of a two-story pavilion, then, in the next gap, a section of scoreboard.

It felt right away like I had played there. I could even recall a fragment of the game, fielding second while their opening bat, a big lad with black hair and a Gray-Nicolls, started belting the bowling indiscriminately over mid-on and midwicket, not slogging exactly but swinging, the ball falling just out of reach of the fielders who, in true club style, were being carefully positioned to stop the delivery just gone. I don’t remember much more: he hit quite a few, but got out eventually. They probably won. What really came back was the cast of the ground – its shape, its size – and the weather, which was warm but overcast, the sky full of darkening summer clouds with no wind to move them.

The traffic eased, and the ground was gone. There was an old painted sign with the name of the club on it, but I couldn’t quite read it in the rear-view mirror. It probably wouldn’t have helped. The feeling was almost dream-like in the way it refused to become clearer or more solid in the memory. It certainly happened, but did it happen there?

I’ve played a lot of cricket in a lot of places, and lots of it was a long time ago now. Where do they go, those games and those places… If I had to sit down with a piece of paper, I’m not sure how many I’d remember. It seems to take something more than just effort to bring them back; it needs a sense memory or a chance encounter that trips some kind of synapse. It’s the odd and ethereal familiarity that you have been somewhere before.

Sometimes I dream about playing on unknown grounds too, so perhaps a place occasionally makes something imaginary seem slightly more real.

It’s a strange sensation, and it’s not one that needs a definite answer even if that answer existed. These are the ghost grounds of half-remembered games, and it’s good when they appear.