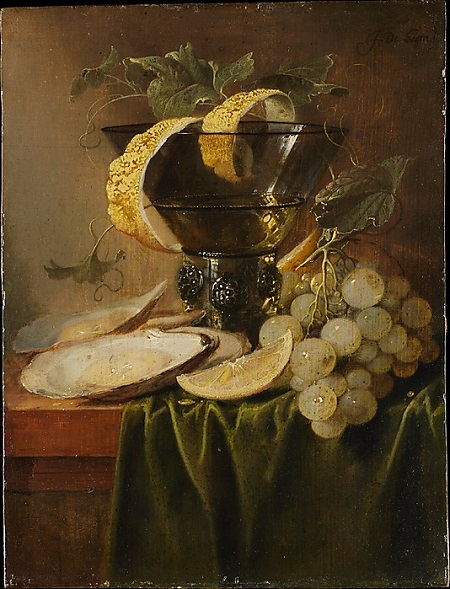 Nige reflects on the power and meaning of still life painting, in the light of a book by American poet Mark Doty…

Still Life with Oysters and Lemon is the title of a painting by Jan Davidsz de Heem (above)  that hangs in the Metropolitan Museum in New  York – or rather it was the title; it was recently changed to Still Life with a Glass and Oysters, ignoring that glorious curl of lemon. But it is still the title of a rather wonderful slim volume – a long essay really –  by the American poet Mark Doty.

Doty’s small book begins with an encounter with De Heem’s painting  and takes off into a heartfelt meditation on our attachment to things,  their place in our lives. His brilliant analysis of the power of the Dutch still life interweaves with scenes – and objects – from his own  life, from the red-and-white-spiral mints that his grandmother always carried, to memories of his wife’s mother and her house (it was an  early, doomed marriage), rummaging and collecting with his late partner (death is ever present here), things seen and picked up, things that  stayed in his life, others that were lost…He finds in the Dutch still life a celebration of abundance, of the pleasures of the senses, the  fall of light on objects, their Presence, their Thisness. The most  commonplace things are intensely seen and celebrated for their own sake, as in Adriean Coorte’s Still Life with Asparagus (below), which is simply a  bunch of asparagus painted with meticulous attention, against a brown darkness, the bundled stalks brought (or restored) to the fullness of  their being by the act of concentrated attention. 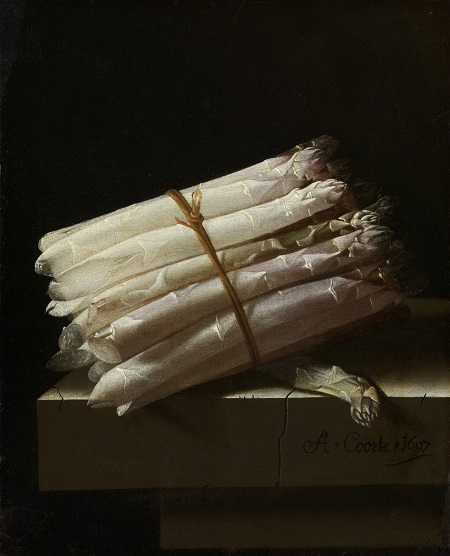 Towards the end of his essay, Doty ponders the relationship between painting and poetry, seeing both as essentially unparaphrasable; they  can only exist as they are, in the form they are in. Whatever he says  about a painting will always fall short, will always miss an element of  mystery – its ‘poetry’. Part of that poetry, Doty concludes in his beautiful closing sentences, is

the inner life of the dead, held in suspension. It is still visible to us; you can look at the paintings and you can feel it. This is evidence that a long act of seeing might  translate into something permanent, both of ourselves and curiously  impersonal, sturdy, useful.
Of what use, exactly? As advocates of intimacy, as embodiments of paradox, as witnesses to earth, here, this moment, now. Evidence, thus, that tenderness and style are still the best gestures we can make in  the face of death.