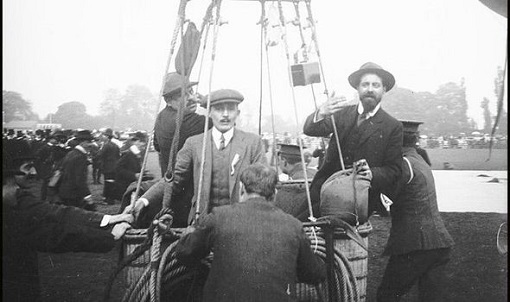 Hardy and de Sorr, moments before the calamity

A stirring tale of adventure and calamity from the golden age of ballooning!….

An accident, the consequences of which are expected to be fatal, took place at Cannes on Sunday last. A M. Despleschin, of Nice, had announced his intention of making an ascent in a balloon, and two gentlemen, M. Hardy, of Cannes, and M.A. de Sorr, a literary man from Paris, had made arrangements to accompany him. These two gentlemen had taken their seats in the car, M. Despleschin not having yet entered it, when some person in the crowd, anxious to see the balloon start, cried out ‘Let go.’ The man who held the ropes, thinking that the order had come from the aeronaut, obeyed, and the balloon rose rapidly into the clouds, and disappeared. M. Hardy and M. de Sorr are both entirely ignorant of the management of a balloon, and it is feared that they have been carried out to sea. Up to the 2nd. no intelligence had been received of them. – The Times, 9 May 1854

Extracts from the journal of M. de Sorr, a literary man from Paris:

27 April 1854. Faffing about aimlessly, wondering how to celebrate tomorrow’s feast day of Saint Louis-Marie Grignion de Montfort (1673-1716). As luck would have it I bumped into a vague acquaintance, M. Hardy, who said he was making a balloon ascent tomorrow, and would I care to join him? I replied that I would very much like to do so.

28 April 1854. I met with M. Hardy as arranged, in a field on the outskirts of Cannes. Beyond some palings, les vaches were mooing. We ignored them and clambered into the basket, or “car” of the balloon. Shortly afterwards, responding to a call from someone in the crowd of spectators who had gathered, the chap holding the ropes let them go, and we began our ascent. I noted that Hardy looked somewhat disconcerted, and asked him why.

“We have begun our ascent prematurely,” he replied, “The aeronaut who was meant to be with us had not yet clambered aboard. I myself am entirely ignorant of the management of a balloon. What about you, is that something you know of?”

“Not a sausage,” I replied, as we rose through the clouds. Below, the earth disappeared from view.

It seemed we were in a proper pickle. But an aeronautical pickle did not quite explain the expression on M. Hardy’s countenance, where disconcertment had now been replaced by abject terror. Deploying the interrogation techniques I had learned as chef d’interrogateurs for the French postal service, I questioned him closely. Hardy turned out to be a Muggletonian, and as such, he believed that when we got six miles up we would crash into the sky. I shook him by the lapels and slapped him round the chops in an attempt to knock some sense into him. He curled up in a pitiable ball on the floor of the basket, weeping.

Considering him a hopeless case, I busied myself by making an inventory of the basket. There was a hand-held rudder, a fan, a packet of biscuits, five bottles of champagne, a barometer, and an illustrated album of bird engravings. The air was growing thinner as we continued our ascent. I said a prayer asking Saint Louis-Marie Grignion de Montfort to intercede on our behalf, and then took a refreshing nap.

When I awoke, we were much much higher, and Hardy was no longer curled up on the floor. He was standing, leaning against the side of the basket, gazing out at the boundless firmament. I snapped my fingers in front of his face – foof-la! – but got no response. Instantly, I realised that he had suffered a complete mental collapse. We must have passed the six mile mark, I reasoned, and not crashed into a solid sky, thus utterly destroying the Muggletonian concept of the cosmos. Hardy’s brain had lost its moorings, and he could not comprehend the inexplicable new world he had entered.

Luckily for both of us, I could. I cracked open a bottle of champagne.

“Onwards to the moon!” I cried.

29 April 1854. Hardy seemed a little more composed today. I have been running through some of his theological difficulties with him, and giving him the opportunity to use my rosary beads. I explained that the Mariolatry of Saint Louis-Marie Grignion de Montfort knocks Muggletonianism into a cocked hat. The air around us is thinner still, and no longer blue but black, and shimmering with stars. To my surprise, there are still one or two birds flitting around, though not ones I recognise, nor are they depicted in the album of engravings. Indeed, the only reason I call them birds is because they have wings. Come to think of it, they may be some form of high-flying insect. Hardy suggests they are angels. He may be right. There is one bottle of champagne left, and a couple of biscuits.

30 April 1854. As I suspected, we are heading straight for the moon. After two days of continuous ascent, it is a curious feeling to be descending. Hardy has made a grand recovery, though he will not let go of the rosary beads and thumped me on the windpipe when I foolishly attempted to retrieve them from his grasp. When I was able to speak again, I told him to prepare himself for our moon landing.

Ten minutes later, we settled gently on the lunar surface. It was all very exciting. We both peered into the distance, and were surprised to see a little trail of dust-clouds heading towards us. On closer inspection, we saw the billows of dust were caused by the footsteps of a man – or, we supposed, an angel, or a moon-being. But no, it was a man after all.

“What are you doing here?” he said, as he reached the basket. His accent was American. He was rather diminutive and weedy, with a little moustache and a haunted look in his eyes.

“Greetings good fellow,” I said, “I am M. de Sorr, a literary man from Paris, and this is my vague acquaintance M. Hardy, a Muggletonian recently converted to Roman Catholicism, who has developed a fanatical devotion to the Blessed Virgin Mary. As you can see, we arrived here by hot air balloon.”

“As did I,” said the American, “Five years ago. And I too am a literary man. I am also neurasthenic, and I do not wish to teeter over the edge into full-blown insanity by having to deal with you two. Please leave me alone.”

“You are a prickly little fellow to be sure,” I said.

“Prickly I may be, but at least when I have written of ascents by hot air balloon to the moon, and similar tales of unlikely adventure, I have taken care to be as scientifically accurate as the present state of knowledge makes possible. You strike me, if I may say so, as the kind of literary gentleman who takes no such care with your narrative. Even if you disguise it as a factual journal of events, it would not surprise me if you roundly ignore all claims of credibility.”

“I fear you are correct, sir,” I said, “And M. Hardy and I will leave you to your own devices. We shall once more ascend in our hot air balloon, though we are both entirely ignorant of its management, and go forth, wherever it takes us.”

As an afterthought, I offered him our remaining bottle of champagne as a parting gift.

“No thank you,” he said, “One drop of the hard stuff and I stagger around as if in the advanced stages of inebriation. It won me a rather unseemly reputation by the time I left the planet Earth in 1849.”

“Well, good luck to you, sir,” I said. And Hardy and I ascended once more, bound for who knows where?