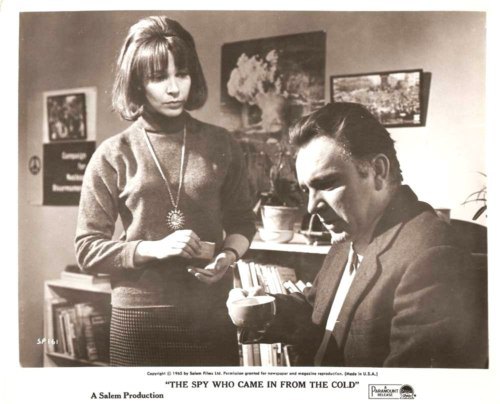 Henry relects on Dão, the ‘totalitarian wine’ of Salazar’s Portugal…

I remember being chilled by John Le Carré’s The Spy who Came in From the Coldin my early 20s (recently graduated and relieved to no longer have to read another tortuous sentence by Judith Butler, it started me on a Le Carré binge which was finally brought to a halt with the disappointing Absolute Friends.) It wasn’t until much later that I saw the Richard Burton film, and a particular scene caught my eye. It’s the one where Burton’s character Leamus has been invited for supper by a colleague at the library where he works called Nan Perry played by Claire Bloom. She’s a very forward (I imagine for the time) and naïve communist. She barely knows him and yet she invites him back to her flat. Leftie floozy! I say ‘flat’; it’s actually more of a bedsit and gives you some insight into the cramped and pinched lives that would have been the norm for lower-middle class Londoners. The film was made in 1965 but it has the feel of a Patrick Hamilton novel.

A ray of Southern warmth is provided by a bottle of wine that she unveils with a little ceremony:

Dinner will be served at eight with a Portuguese wine spelled D-A-O with a twiddlle over the ‘A’ and pronounced ‘dang. . . I made Hungarian goulash I thought it would be tactful to serve a communist food with totalitarian wine.

It’s probably a little inaccurate to describe the authoritarian conservative regime of António de Oliveira Salazar who ruled Portugal from 1932 until his death in 1968 as totalitarian. Certainly he had nothing on the Communist regimes of Eastern Europe that Perry idealised. He owed his remarkable longevity to being on our side in the Cold War (not unlike the ex-Nazi working for the British secret service in the film.) Salazar was the son of a small farmer from the Dão region in Northern Portugal so would have known the wine intimately. He instituted a system in his home region where by law all grapes had to be sold to co-operatives to make the wine. There would be no private Dão wines. Hungary would have had a similar system as did many other wine regions in authoritarian hands.

This odd system continued under the socialists who seized power after Salazar’s death and only ended when Portugal wanted to join the EEC. I’ve never tried any of these co-op wines but I do remember you used to be able to pick up old Dão wines for not much money in the late 90s. Supermarkets often stocked a Dão garrafeira (similar to a Spanish reserva) for about £4.50. I remember them pale red with age, oaky and mellow, with a very lively acidity. Received opinion on such wines was that they were often oxidised and wasted the potential of this region but I spoke with Charles Metcalfe at an event and he mentioned trying a supermarket Dão from 80s recently and was amazed how it aged. He went on to say that many Dãos from the Salazar period were still going strong.

I don’t think you can buy old-school Dão anymore. All the co-ops are in private hands and no one wants pale reds without forward fruit. Or rather the Portuguese think that they don’t, there has been a resurgence in interest for such wines from their Iberian cousins. Charles did give us one Dão that had some of the old magic. It’s from Julia Kemper, the  producer who made the oaky white I liked recently. The red couldn’t have been more different having very little or perhaps no oak. Much darker and more concentrated than a Dão of old,  it had a fragrance and poise that reminded me a little of Chinon and a bit of Burgundy. Sadly I had a bit of a cold so couldn’t fully appreciate it. I’d love to try it again and also see how it ages. Corking Wines have it for £17.55 a bottle. Hardly the bargain of old but well worth the money.

When I watched the Le Carré film, I giggled a bit at her pronunciation of Dão. I’ve always pronounced it to rhyme with cow. Well turns out the idealistic Communist was not far off, it’s “downg” pronounced in a nasal fashion. So now you know.