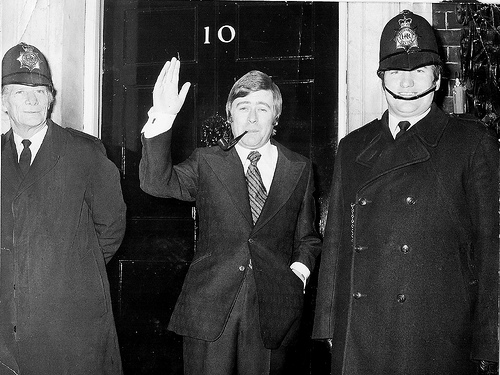 In his Dabbler Diary on Monday, Brit noted the delusion of contemporary “panel show comedians that they are public intellectuals, superior in their integrity and insight to the corrupt political class”. This widespread phenomenon leads the likes of Russell Brand and Steve Coogan to pontificate on matters outwith their ken. In this they are assisted by the BBC, for instance by the now almost obligatory inclusion of a comic performer (in “serious” guise) on the panel of Question Time.

Where Brit is wrong is to think this is something new. As my research has shown, comedians have long been at the very centre of British politics. What is new, and what fuels their current absurd warblings, is the sense among today’s funnypersons that they have been pushed aside, shoved to the margins, in stark contrast to their predecessors. Thus they shout louder, and more witlessly, all too aware of their irrelevance.

How different things were in the eighties, when Margaret Thatcher barely made a decision without the sage advice of Mike Yarwood. The impressionist was constantly at her side, doing an impersonation of her press secretary Bernard Ingham, Ingham himself having been relegated to the role of typing press releases and restocking the stationery cupboard. The big bushy fake eyebrows Yarwood wore when in character are now held in the National Archives, attached to a piece of cardboard with cow gum.

Thatcher was of course following the practice of her immediate predecessor, the Labour Prime Minister Jim Callaghan. Callaghan reserved a place at the cabinet table for Dick Emery, the sparkly-eyed TV comic famed for his catchphrases “Ooh, you are awful … but I like you” and “Crisis? What crisis?” His counsel during the three-day week was said to be “mildly amusing”.

Ted Heath appointed Charlie Drake to several important positions, but the diminutive unfunny funnyman was unable to outface the then mighty Trade Unions, being so diminutive and unfunny.

Harold Wilson, in his first period of office, had better luck when he handed most of the decision-making to the Carry On team. Sid James and Hattie Jacques were the true powers behind the throne, and it was apparently Charles Hawtrey who first spoke of “the white heat of the technological revolution”.

In the fifties, Betty Marsden was often spoken of as a likely candidate to become Britain’s first female Prime Minister, after her invaluable contribution during the Suez crisis. And before the war, the music hall act Wilson, Keppel, and Betty each held the top positions at the Home Office, the Foreign Office, and the Treasury, on a rotating basis, so that nobody was ever sure who was in charge of what. That arrangement served to flummox Johnny Foreigner, at least until the outbreak of hostilities.

Such were the comedy politician titans of yesteryear, in whose shadows the current crop of japesters can only bleat impotently, parroting the latest Guardian editorial. It is a sorry sight.

8 thoughts on ““But what would Dick Emery do?” – The role of the comedian in British political life”