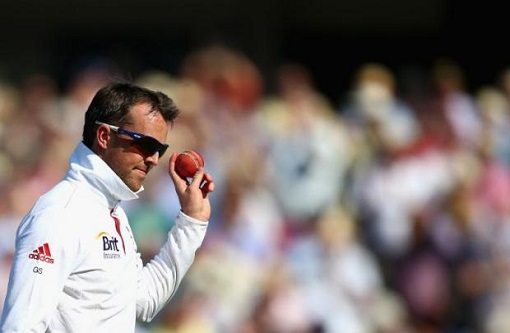 Amongst the most shocking moments of England’s shocking Ashes series this winter was the sudden mid-tour retirement of Graeme Swann, one of the country’s greatest ever spin bowlers. Here, Jon Hotten examines the mysteries of the spinner’s art, and what Swanny leaves behind…

Decades ago on a Saturday afternoon in winter at Alf Gover’s cricket school, a kid came to bowl in one of the nets. He couldn’t have been more than 14 or 15; he looked younger than that. To right handers, he came left arm around the wicket, which at Alf’s was no mean feat in itself because the run ups weren’t exactly what you’d call extensive.

He was a wrist spinner. His stock ball turned into the right-hander, and it turned miles. With the angle he was creating and the loop, balls pitching outside off would have cleared leg stump. He dropped a lot of deliveries short, and he got hit hard and often but every now and again he bowled something completely unplayable, a ball that dipped alarmingly and then ripped upwards off the seam and through the gate or onto the gloves.

For the next few years, I half-expected to see him debuting for a county, or at least hear about him. He had something remarkable. Perhaps he didn’t make it through the most important stage for a kid like him, when he’d get slogged everywhere by bigger, older players and he’d need a captain and a coach who could tell him how to handle it.

The reason I remember him is because spin bowling, unlike pace or swing, has the properties to be unique. The very best spinners can’t be directly compared to one another; it is the loosest of generic terms. Warne, Murali, Ajmal, Harbhajan, Saqlain, Afridi, Kumble, McGill… they can be bracketed only in the broadest sense. When one comes along, they shift the imaginative framework of the game.

Graeme Swann emerged when conventional off-spin was consigned to the dustbin of history, sent there by the mystery of the Doosra; the twist imparted on its traditions by Murali’s mad-ass wrist; by flat pitches and giant bats. In his way, Swann reinterpreted a dying thing. From the new age he took revs, imparting them in huge number on every ball except his slider. And from the ages he brought back the off-spinner’s classic line, that drew the drive and opened the gate. Around the wicket to the left-hander he bowled at the stumps, and as soon as DRS began to show that he was almost always hitting them, old-style off-spin was back in the big time.

The magic of spin is in its distorting effect. The spinner has nothing to defend himself except the intrinsic deceit of what he does. Everything rests on the casting of doubt. When someone does it well it seems obvious, like a magician revealing the inner mechanisms of a trick, and yet they must have imagined it first.

Graeme Swann brought off-spin back from somewhere. It has had a distorting effect on England’s thinking. His ability to rip revs onto the ball has led the spin department at Loughborough to center their development pathways on bowlers who can get above a certain number. They may be right too – another Swann would be welcome anytime.

Spin, though, resists rigid thinking. It’s about imagination. Saeed Ajmal and Sunil Narine, for example, rely on moving the ball by the width of the bat just as Warne and Murali spun it across the crease. The next great spinner may do something else entirely. He might be a left arm wrist merchant, or he could be the new Jack Iverson. The one thing he’s not likely to do is come up a pathway and knock on the door.

Swann’s legacy will be the kid who has sat at home and watched the ball drift and dip and turn and has figured out a way to do something like it themselves. It’s why all of the innovation in spin has come from outside of coaching centres, from someone who’s stared down those 22 yards and let their imagination rip.

One thought on “The Spinner’s Web”