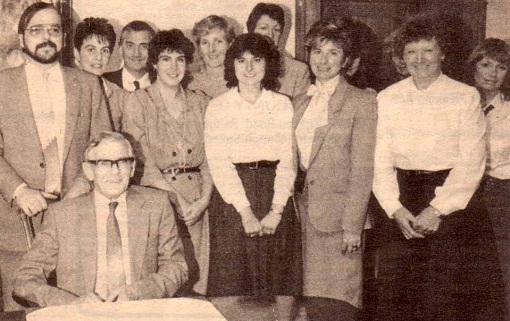 (Derek is back row, third from left)

A few years ago bookseller Steerforth came across a remarkable diary, which he began to publish on his blog and which we now serialise on The Dabbler. If you’re new to Derek, you can catch up with the previous instalments here. This week: 1986, and Derek faces financial disaster…

1986 appears to have been a watershed year for Derek. It begins on a ‘positive’ note, with Brenda’s cantankerous mother Nanna (with her ‘incredibly lifelike impersonation of the devil in full spate’) finally dispatched to an old people’s home. Derek and Brenda had waited for this moment for years, but in spite of this the spark of passion doesn’t appear to have been reignited and the procession of migraines, aches and mysterious viruses continue unabated:

My whole system creaks and groans; aches fill me; my head faintly throbs. Yet I have been out for an hour digging the garden. I had company: a blackbird. He was obviously in search of worms in the soil I was turning over, but though he came close, he had not the courage to stay close so that he might have had a whole feast. Men are like that.

I have felt somewhat wild today, have spent much of my time making foolish remarks and generally annoying people. I think my chemical imbalance has something to do with it, for while making a fool of myself, I KNEW that I was, but seemed unable to calm my inward turbulence.

In fairness, Derek has many worries. Now in their mid-50s, Derek and Brenda are struggling to live on his salary as a local government officer. The diaries contain several letters from Derek’s bank, including this rather chatty one, which was written in response to a lengthy epistle from Derek:

I thank you for your letter of the 12 August and would commiserate with you insomuch as NALGO have seen fit to turn down your rise of 6% and that indeed others of your union appear to wish for a sum which must surely in this day and age be unobtainable. I feel I ought not to continue in this vein as I feel that bankers like publicans should not get involved in discussing politics or religion with their customers. Unfortunately although you have stated you have got that point out of your hair, it is something which I find I cannot as most of mine has disappeared over the last 15 years or so!

Turning now to the mundane matter of banking and its relationship to your account, it would appear that were I to mark the overdraft limit on your account of £400, the present limit, for a period of three months, it would give you time to gather the harvest and review your finances.

Derek does his best to live frugally, selling books and turning his garden into a mini-allotment, but the sums still don’t add up. Under normal circustances, Brenda might have been able to get a full-time job, but she has a son to look after: 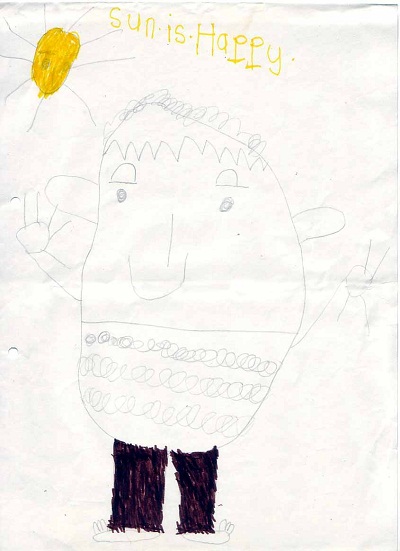 And this innocuous drawing becomes heartbreakingly poignant once you realise that the son was 24 years old when he drew it.

But it is not all doom and gloom. In the spring, Derek and Brenda have an idyllic break in Dartmoor with their son:

We drove on over the moors, delighting in their austere grandeur. We would have liked to climb up a tor or two, but had run out of energy. Anyway, once we got to Ashburton, our strength came back and I was able to spend a happy hour in the bookshop there, acquainting myself fully with the stock.

We had expected to meet much traffic on the motorway, but found it almost deserted. Brenda suggested that the fear of radiation fallout was keeping people indoors. Anyway, we were able to maintain a steady speed all the way home, which meant that we got in an hour earlier than we expected.

It is good to be back with books about me and music. And space as well. And it is good to have just the three of us.

The ‘fallout’ was, of course, from Chernobyl:

Radiation fear is strong in the land, but since there is little we can do in a practical way beyond consuming iodine tablets, I take little congnizance of the fear. The leaves on the trees are still as bright as they appear; the birds still sing; the traffic thunders by; and all this shall pass. On the coach travelling to work yesterday morning I was struck by the thought that the Saints shall “inherit” the earth, which implies that it will have to be cleaned and cleared and made anew before the Owner shall give it to them.

Around this time, a glimmer of hope appears, when Derek’s boss announces his retirement. Having worked closely with Mr Sumpter for many years, Derek is the natural candidate to replace him. Perhaps this is the answer to Derek’s prayers.

Full of hope, Derek submits his application and, a few weeks later, is invited for an interview:

Well, I had my interview for Mr Sumpter’s post this morning. It was scheduled for an hour and lasted for one hour and three quarters. There were four other contenders: a man from Lancashire, a man from Gloucester and a man from Rochdale. I was first through the door; and since half past eleven this morning have been waiting for a sign, the motion of a hand, a small telephone call that will announce “Yea” or “Nay”. And the longer the silence lasts, the more sure I am that the post is not to be mine.

I have torment of mind and desolation of heart, for promotion is one thing, and the feeling of worthlessness if it does not come is something else.

We are having a year of disappointments. Our debts hang round our necks like albatrosses; and I am most strongly aware of having been passed over when it comes to assisting with the history of the church in this land. If only one was sure that heaven draws closer.

Two days later, Derek learns that he has not been appointed as Mr Sumpter’s replacement:

Well, all my worst fears have come true. So sure was I that Mr Sumpter’s post would not be mine, that I tossed and turned upon my bed all Wednesday night. When I got to work, no sign came, so I phoned Bob Sanders and after a brief hesitation, he told me that the man from Lancashire had got the job. I knew it would be him. The Spirit of the Lord whispered to my spirit most powerfully, the first time his name was mentioned, that he would take the job.

Bob said that all the interviews were good, but the panel felt that he had the most to offer when it came to solving the problems rife at the office. This implies that they felt that I was part of the problem; and perhaps I am. For my defence of Mr Sumpter has not gone well with the Insprectorate.

When I told Mr Sumpter of the decision, he turned haggard and grey. I thought he would weep; he was certainly extremely angry and he cried out “They do not know you! They do not know you!” He feels that his bad management is to blame and that by putting me in a position where I felt obliged to defend him, he shattered my chances. But I do not feel this is true. I feel the Lord has something else in mind.

I can’t help feeling that Derek’s feelings about Mr Sumpter are more ambivalent than he suggests in this extract. But perhaps it is also tempting to blame his failure on the positive virtues of his loyalty to Mr Sumpter, rather than dwell on any personal shortcomings?

I have received sympathy from many of the staff. As one put it, “Better the devil we know..!”. Anne Snagge was particularly upset, as was Shirley James. Kind of them.

The pain was great on Thursday. I was in torment, feeling again the terrible worthlessness, the feeling of the last chance gone. Hell it was, and just as keen. But I have got my second wind now; and we eat and have a roof over our heads; we have great friends. And I am still quite the best off of the Saints in the ward. And the Lord stands by me. The test is his.

Brenda has been much tried by this blow. She is desperately worried by our debts and the fact that they are overtaking our income.

The food was excellent. Breaded chicken legs; pizza; pate; nuts; and a cake made by Mr Sumpter’s wife in the form of a crossword puzzle. The icing was excellent, but the cake itself was rather dry for my taste.

As for the entertainment, Shirley and I did several short “telephone calls” demonstrative of the variations of John’s surname. I wrote the script and it seemed to be a howling success, as were the two poems I had written for the occasion.

I then made a few remarks, and we presented a set of binoculars to Mr Sumpter, the pack of Mintoes from Callard and Bowser (a total surprise to him), and a large bottle of champagne. A pot of South African violets was given to his wife.

Wine flowed freely, but Mr Sumpter had bought me a large bottle of pure grape juice, and I was surprised at the number of other people keen to try it. Shirley James had never had Shloer before. How sheltered can you be?

I was at home just before half-past-seven to an empty house. I fed the bunnies and gave one of them a half-hour run up and down the hall. The other was asleep in its bed so I did not disturb him.

Derek is now 56 and as he wrote earlier, feels that his “last chance” to advance his career has gone and in a sense, he is right. A few years later he will seek early retirement on the grounds of ill health.

With no immediate hope of paying off their growing overdraft, Derek and Brenda sit down one Friday evening and decide to sell the house. From Derek’s writings, it is clear that he loves his home, particularly his library, with its books and classical records. This must have been a very hard decision to make.

But then suddenly, out of the blue, everything changes:

Brenda has been awarded an Invalid Care Allowance in keeping with the recent decision of the European Court of Appeal. This is an allowance made to women who are prevented from working by the need to look after a handicapped member of their family. The allowance has been back-dated to December 1984, so Brenda has been sent a cheque for £2391.75. This now enables us to pay off our overdraft; and for Brenda to put a large sum in her building society book. What a blessing! She promptly went out and bought some trousers and a pair of black shoes.

The year ends with Derek and his family watching a video of “Back to the Future”:

A good plot, plenty of laughs, and sharp dialogue. But the old problem reared its head again: pointless, grating blasphemy. Why will these producers do it. Another film ruined.

Next time: the final episode of Derek’s Diary…

2 thoughts on “The Diaries of Derek – 7. Derek’s Last Chance”