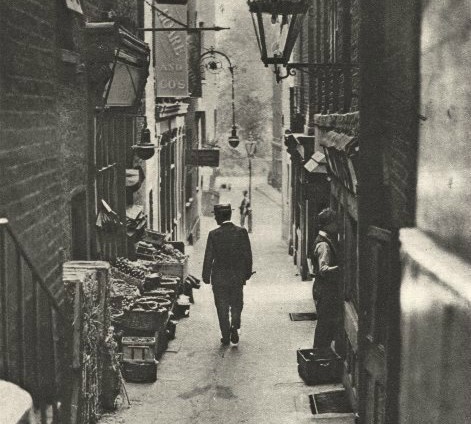 Time for the second installment on the curiosities of our capital city from Peter Watts – journalist,self-confessed London geek, and author of Know London. Streets beneath streets, layer upon layer, we descend into history…

Paul, the librarian at Time Out, first told me about the street beneath Charing Cross Road in around 2005. He promised to show it to me, but never did.

Then, last month, I saw it. I was mooching around Cambridge Circus, noting the loss of London’s best-named book shop, Lovejoys, a landmark from the time I used to be a dedicated fanzine-browser across the road at Sportpages, also since departed. I had always assumed Lovejoys was a wittily named Soho porn shop, but it actually stocked cheap classics and DVDs. The shop taking over the site will be a sex shop it seems, albeit of the modern, seedless, air-brushed, air-conditioned variety rather than Soho’s traditional damp basement. With the erasure of any trace of character at the arse-end of Berwick Street, the old Soho sex shop is nearly gone. Indeed, much of this post is about things that have removed, including Paul the librarian, who left Time Out shortly before I did.

As I crossed Charing Cross Road from Soho and stood on an island in the middle of the road waiting for a No 24 bus to pass, I happened to look into the grille beneath my feet. I have instinctive curiosity when it comes to London holes but this is the first time I’ve really seen anything of interest, as, to my surprise, I could make out what appeared to be a subterranean street sign set into the wall a few feet below the ground.

I leaned in closer and there they were – not one, but two street signs for Little Compton Street, one blue enamel and the other painted on to brick. Here was London’s buried street.

Were the underground signs accidentally left behind when Charing Cross Road was run roughshod over the top of Crown Street or was it a careful act of preservation by an unnaturally thoughtful council? Or were they removed from a wall by unknown hand and deliberately placed down here, where Little Compton Street has existed ever since, entombed beneath London feet and offering a tantalising glimpse of those fantasy Londons from countless dreams and dramas. There’s an echo of China Mieville, Neil Gaiman and the Borribles, but also of Malcolm McLaren’s mysterious and misremembered subterranean Victorian road (neatly discussed here) that is said to exist intact beneath Selfridges on Oxford Street.

One wonders whether the brutal Crossrail redevelopment of this bedraggled part of the West End will allow any such traces to remain. I hope so. And I hope they also have this last-gasp, accidental feel, of something that London can’t quite let go, like dying fingernails clawing a wall, leaving behind a ghost, a whisper, of one of London’s many pasts.

For more of Peter’s terrific writing, head over to his blog, The Great Wen

2 thoughts on “Secret London: The Underground Streets of London”